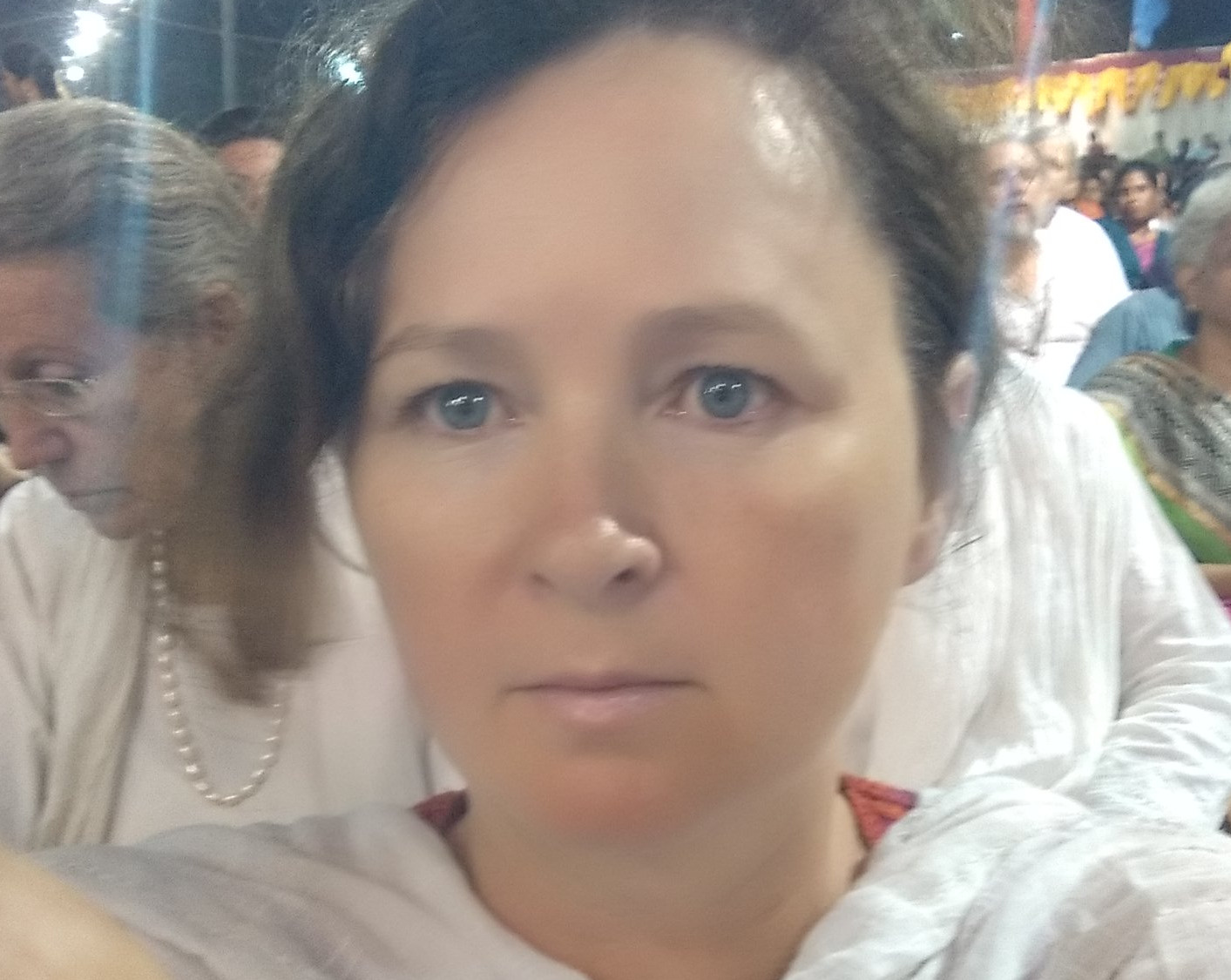 In the summer of 2015, writer, director and producer Lisa Sabina Harney was approached to take part in a remarkable project that involved directing a season of 13 episodes for the TV drama Mukatano Junction set in Nairobi, Kenya.

The show itself has been running for several seasons, amassing an audience of over 8 million people. Working with mostly female writers, Lisa also took the opportunity to train and exchange skills with two new female directors who in turn each directed an episode themselves.

In celebration of International Women’s Day 2016, Directors UK took the opportunity to catch up with Lisa to find out about her experience and what she gained from it. Underneath the interview you’ll also find a selection of some of the best articles written by our women members.


Directors UK: What was your overall experience directing in Nairobi and how different was it from the UK?

Lisa: Working in Kenya has a whole set of different challenges than working in the US or the UK. Drama production there is at its infancy, so finding a reliable, experienced crew was a bit hit and miss. Saying that, the company I worked for was sponsored rather than funded by broadcasters and part of the job remit was to train up Kenyan crews to a professional level. The crew I worked with though, had a fair bit of experience and understood the format and working conditions. It held around 30 people, all happy and enthusiastic so that was a huge bonus.

Budgets for dramas in Kenya are generally low so we were shooting up to ten minutes a day, which is a lot, and we had a fairly low shooting ratio. It requires discipline to shoot under these conditions as the broadcasters don’t pay for content in Kenya, they expect it for free, so until this changes there’s going to be an issue of producing high production values in drama.

“The crew I worked with though, had a fair bit of experience and understood the format and working conditions. It held around 30 people, all happy and enthusiastic so that was a huge bonus”

What’s it like working on a show that’s already well established?

This is the first time I’ve directed a long established TV show (13 seasons) and I didn’t know anything about the show when I started, so there was a learning curve for me on that level. The actors knew their characters inside out, so it was about how to bring more depth and understanding to their roles without changing too much; the bad guys still needed to be bad and the good guys still needed to be good. However, I was employed to reboot the series, because the last one or two saw a drop in ratings, so there was a degree of reinvention that needed to happen, and that was the fun part for me.

We began to shoot the scenes differently, introducing a new style audiences were unfamiliar with. New ways of shooting scenes and developing the mise-en-scène (visual themes) into believable scenarios. We also brought some depth and diversity to the dialogue as some of the writing started at a high-level drama, leaving the actors stuck with nowhere to go. 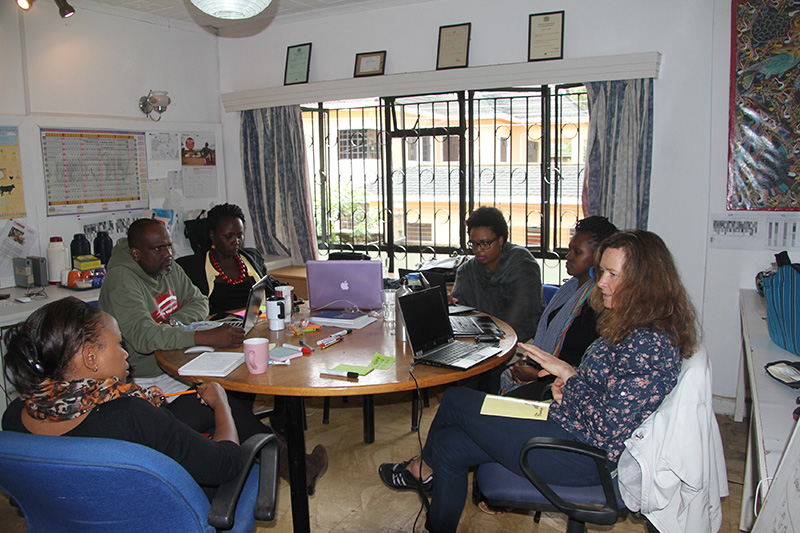 The team of writers with Lisa

What level of creative control did you have? And what did you do differently there?

I was fortunate being brought in at the writing stage, so had a very direct input in the scripting process. This was necessary, as the sponsors of the show were either NGOs, and in my case, UN Women and an additional educational sponsor. The storylines matched their agenda.

For example UN Women wanted the theme of female empowerment for this season and so the writers and I spent a lot of time discussing the roles of women in Africa and what they want to see changed.

The writers have worked with the show a long time and know the show inside out and so I saw my role as providing the context for the theme and letting them develop the characters. In terms of doing things differently, it all boiled down to clarity. I started with clearly defined roles, we had a crossover between myself and the script editor which wasn’t helpful. Also the scripts were written quickly and upping the quality of the writing took time. That process was difficult as people’s feelings get hurt when you ask them to rewrite content that was previously acceptable. Some of the writers were also actors and the script editor was also a writer and actor and this created a conflict of interest.  In hindsight, I would make sure these issues were resolved before shooting. 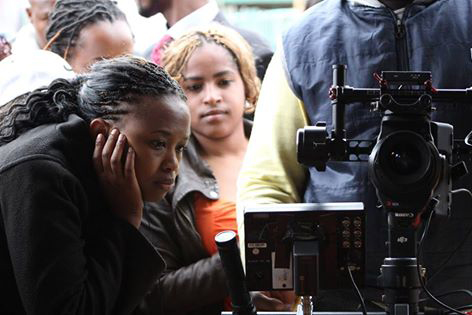 Patricia with the camera in the foreground

“The theme of this season was female empowerment, so I particularly wanted female directors. There are simply not enough of us!”

Has it been difficult to direct and train others at the same time and did the process teach you anything new?

Training young, female directors in Nairobi has been a great experience. In a country in which women are rarely the boss, it’s a complete joy to see these women take charge of their scenes and produce good work. Before we shot, we spent some time just watching TV shows - good ones, average ones, bad ones - and breaking down each scene. It was useful to do this for them, as they suddenly realised that most TV dramas, especially the kind that comprises similar scenes and dialogue to this one, breaks down into a few camera positions and so coverage wasn’t a mystery for them anymore. I think for them it took the fear out of the process.

The two female directors Patricia Gichinga and Mkaiwawi Mwakaba shadowed me for the first few weeks, and then I got them working on a few scenes. At first just two handers and then I gradually increased the complexity of the scenes providing them a chance to work with all the actors on all the sets. It was also helpful for me having another set of ears and eyes on a scene, and their knowledge and experience on cultural issues was invaluable. I really took a back seat when they started directing scenes, only involving myself when they asked me to. I wanted them to feel as if it was their set and their scene, not mine.

How did you choose the directors you were going to mentor?

The theme of this season was female empowerment, so I particularly wanted female directors. There are simply not enough of us! Before I arrived in Kenya, they had chosen one male and one female director, the guy didn’t even turn up for the first meeting so I asked if our producer, a young intelligent Kenyan woman - Patricia - wanted to train as a director, and she jumped at the chance.

The other lady - Mkaiwawi - was a regular editor for the show so it seemed a natural choice for her to move from editing to directing.

In what way was UN Women involved and did their involvement shape the creative decisions you made?

UN Women were one of two sponsors, and the only difficultly in working with them is that they’re made up of many different agencies, all with different agendas. But we took the global theme of female empowerment and applied it to the characters on the show using both obvious and subtle ways.

We targeted specific agendas that related to health, education and relationships in order to change attitudes and bring forward a discussion on traditional values versus ones that populate modern 21st century Kenya. The UN were totally delighted by the series and signed on to do another one. There has been a big impact in East Africa. There was a big response when the show aired, because part of it is to make sure the sponsor message is getting across to people and that systems are in place to monitor the response and impact. 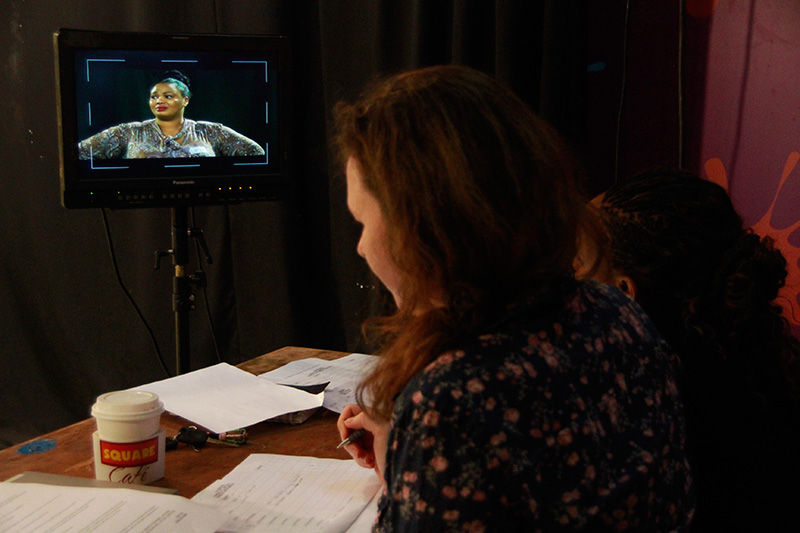 In what way did you focus on gender at work and in Kenyan society? Are those dynamics different from what you’ve come across in the UK?

After reading the statistics about female drama directors in the UK, I’m not sure Kenya is so different! They don’t usually have women in these roles, it’s difficult for them to get a start in it, and there is a tacit understanding that women support men in their roles but not the reverse. The company I worked with had a policy of training and promoting women, actively giving them positions of responsibility. People in Kenya were extremely supportive of it, the men in the crew especially. It was inspiring for me to see all the heads of departments training their crew during the shooting.

How did you come across this work opportunity?

I think they found me on IMDB or Production Base.

What would you say to other directors thinking of joining a similar project?

These are low budget projects, with a relatively small crew and fairly standard equipment and this comes with some compromises and difficulties. Saying that, it’s also a great discipline to work in a fast and methodical manner, it’s all about the preparation, like any shoot, and it was also a lot of fun. The actors were really talented and loved working on the show which made my job so easy.

I think doing these sorts of NGO sponsored shows is meaningful in that you hope attitudes will change as a result of the show and that it genuinely helps, inspires and educates those that watch it.

This is the very worthy cause indeed and certainly one worth contributing to.

In celebration of International Women’s Day 2016 we take a look at some of the best stories from our members promoting women directors working in all genres:

Lisa Sabina Harney has spent 18 years working intensively as a writer, producer and director of high profile documentaries and drama. She has made films for many of the major broadcasters in both the US and the UK: the BBC, PBS, RTE, Discovery Channel, Channel 4 UK, Channel 5 UK, MTV to name a few. She is the recipient of a Golden Eagle and Hugo Award, and has been shortlisted for a BAFTA. She has been interviewed and published by the Guerilla Filmmakers guide as an expert in dramatized documentary.

"TV will never be a director's medium" - directors respond