So our crowd funding campaign for Deep Clean finished on a high – we raised our target, and in fact exceeded our £25k goal, eventually hitting £28,388, something that we could not have expected. 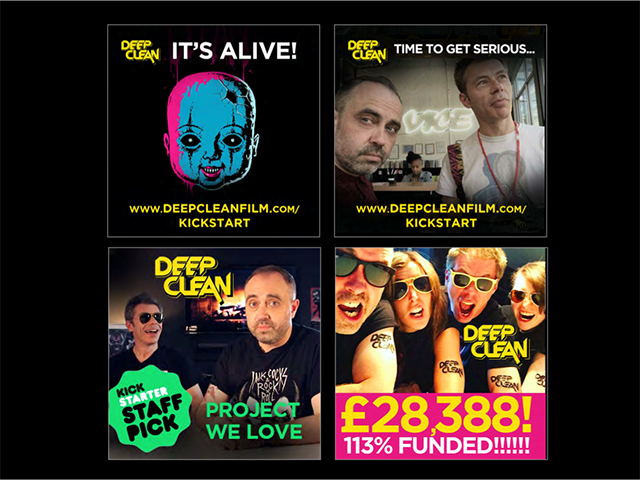 Many people have asked me “How was it?” What I think they wanted to know was, did the campaign do well for you and the project? Did do you think you did better launching the film publicly in this way than attempting to raise the funds privately, quietly, without the glare of public attention?

A difficult question to answer succinctly – it was many things. It was exciting, nerve-shredding, exasperating, and ultimately we achieved what we set out to do – for which we consider ourselves extremely lucky and grateful to all our pledgees and partners.

Now all we have to do is make the film. Easy.

We formed partnerships by trying to create win-win scenarios, offering content, prizes, and in particular offering film making insights into the process through LOCO, Britflicks, Sheffield University, NoDirectionHome, Shooting People and others.

Fun fact: above you can see me lose almost a stone in weight between LOCO (left, 3 weeks before campaign start) and Sheffield (right, a week to campaign end)

This ‘win-win’ idea is important because it means you are not asking for people to help you, or to do you a favour, but to partner with you to offer something of value to their mailing list/readership/audience. They all need content, stories and reasons to communicate with their base, and if you can create that story/content for them, that’s a good deal for both of you.

We had articles or competitions run with VICE.com, Shooting People, Screen Anarchy, Orbital Comics, Directors UK, LOCO, Britflicks, Festival Formula and Filmsshort.com. Some of them gave us amazing quotes that we could use about the campaign. For example: 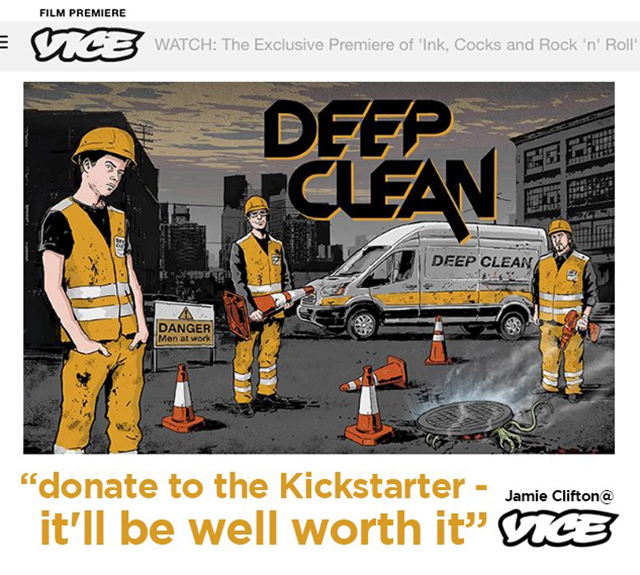 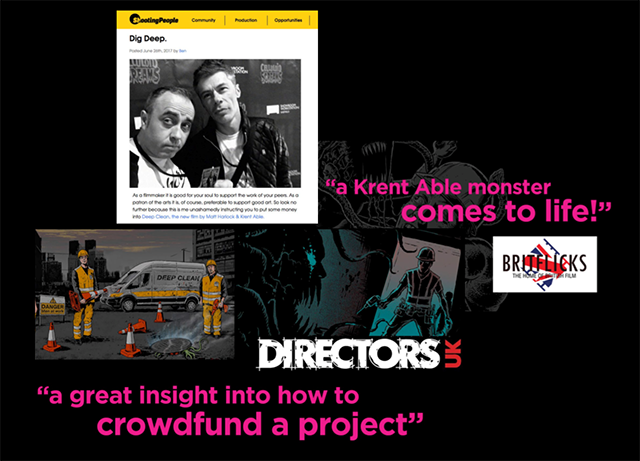 We also accessed the curated pages and had tweets and support from SXSW, Berlin Talents, Shooting People, Sheffield Doc/Fest – which adds validity, but also gets you a slightly reduced percentage from Kickstarter – useful!

We also were awarded a PROJECTS WE LOVE status by Kickstarter before we even launched, thanks to our friends at Shooting People who put us forward for that – all part of the validation that you must achieve. 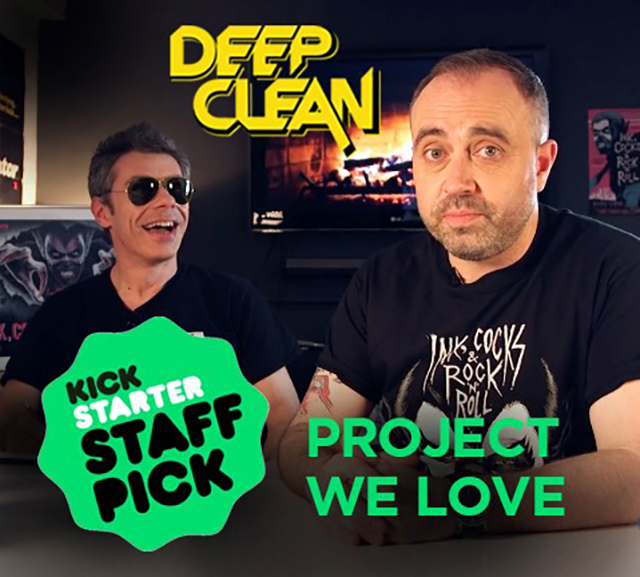 Did all of this lead to direct donations? Did these partnerships yield direct funding spikes, money we could see? No, not measurably, but they created a conversation that was happening around the project, which we believe made people feel like it was valid funding opportunity - to allow people to feel like they are getting behind something that is ‘happening’, that is real, that is not a bunch of con men who will say they will make a film and then not deliver it.

How else can you prove that you are, as Richie from The Manics famously carved on his arm once, “4 Real”

It’s totally not for everyone this one, I admit, but…

I got my doll’s head tattoo, as promised during the campaign, and yes - it hurt.

But importantly, this was also a symbol to me of, not only our commitment to the campaign but the idea of fighting stasis - that there can be merit in going forward with intention and purpose, and trusting that if you take the first big step and say “Yes, we are doing this”, that others will get behind your possibly crazy notion and get onboard anyway…even if it means scarring yourself for life. 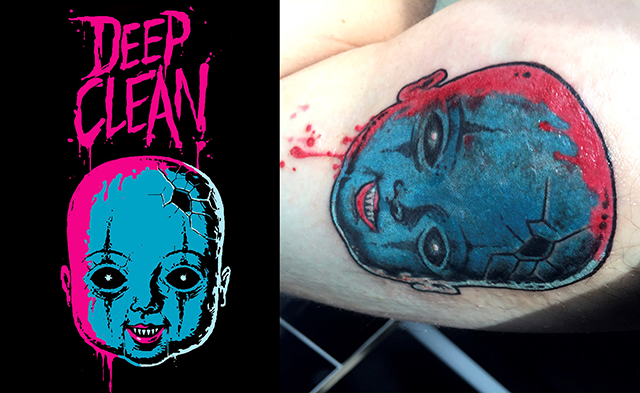 But I guess the main follow up question is…

What were our main takeaways from the campaign that we might perhaps pass on to others considering this rocky, somewhat high-wire and exposed route to funding a project?

There were certain things that happened that only because we were presenting the project publicly in this way.

We were thrilled when amazing storyboard artist James Iles got in touch (through our friend Corin Hardy, director of The Hallow and upcoming The Nun) from the campaign. He has now boarded all the action sequences for the film in such an amazing way, adding ideas, shots and things we would not have thought of had we not worked with him, a genuinely joyous collaboration. 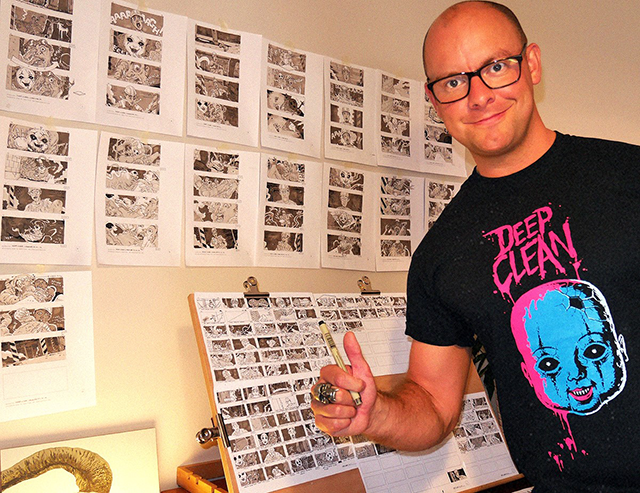 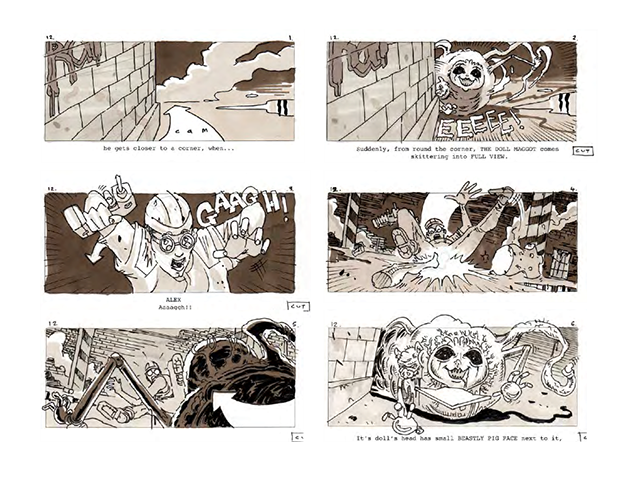 SFX supremo Dan Martin has been working hard on the doll maggot, going from sketch… 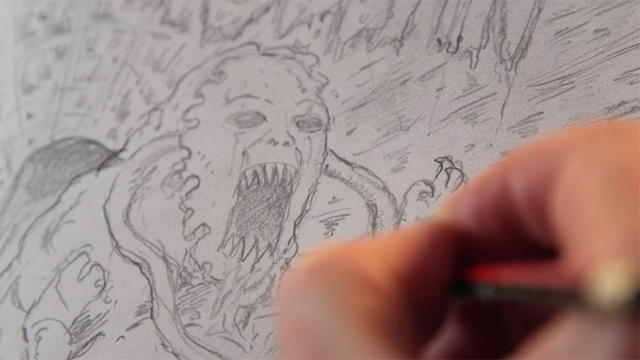 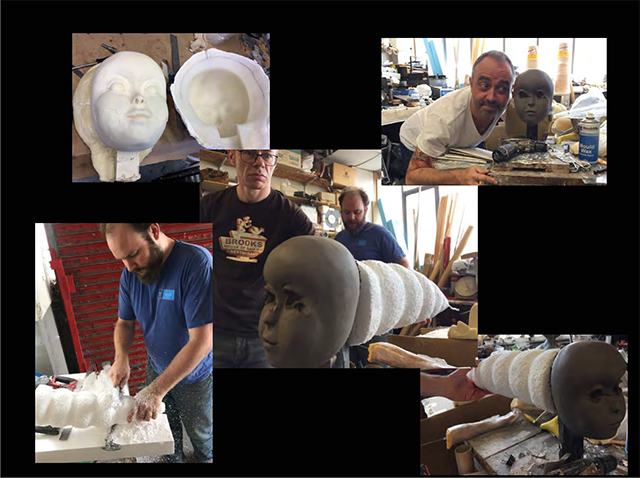 To clay facial original, through to the cast head and sculpting of the body, working on five different versions each based on what the thing is required to do in each shot. 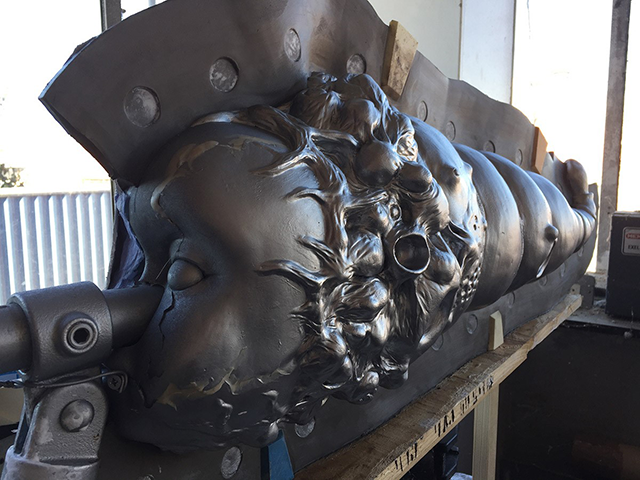 We were praised for the style of our communication through the campaign — how often do you do it? What is the right way to go about this kind of communication? In other words, how do you talk to people? What is the language?

We found that the language of inclusion was most useful – asking people questions, to get involved, and trying to be amusing, rather than just shooting facts or things we had done at them. But we also did this very regularly, and with purpose, posting five times a day on four social networks. Did people get sick of us? Possibly, but we really tried to vary the language, type of communication (funny sketches & content related to the film, backer updates, news stories) to keep people from resenting our constant barrage of information…

See all of the video content we made for the campaign here. 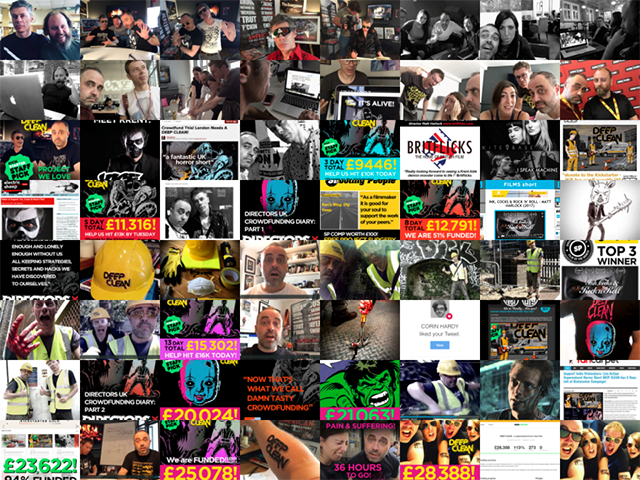 I have met with several film making friends over the last few weeks who are about to jump in to the crowdfunding space, and wanted to know how we did it. What were our most popular Kickstarter rewards? By far the most interest was generated by the Krent Able ‘Make Me a Monster’ original portrait…so I guess that’s unique, bespoke, fun. 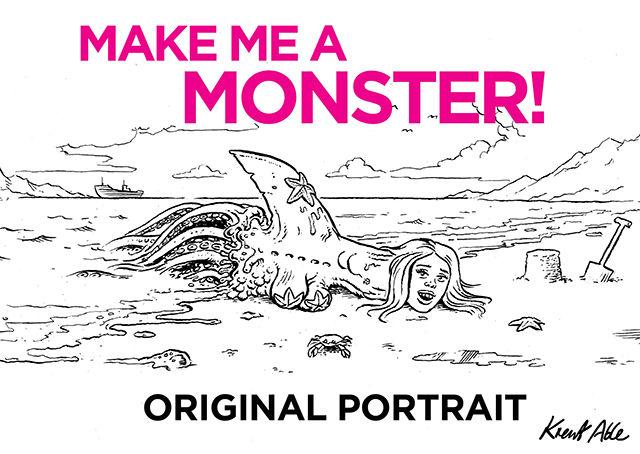 We shifted a bunch of other stuff too, but the main advice we got was have lots of different rewards (we had 23) including bundles. The average campaign has eight, but it is proven statistically to benefit your campaign the more choice you can give.

You can see the original Kickstarter campaign here.

We were also very fortunate to access the Genera Film Fund – a new fund for short films. We made the application but the contact was set up by our exec producer Mike Chapman. We have no way of knowing but I am fairly sure that this fund came our way via the energy created from the buzz around the crowdfunding campaign. Check them out here. 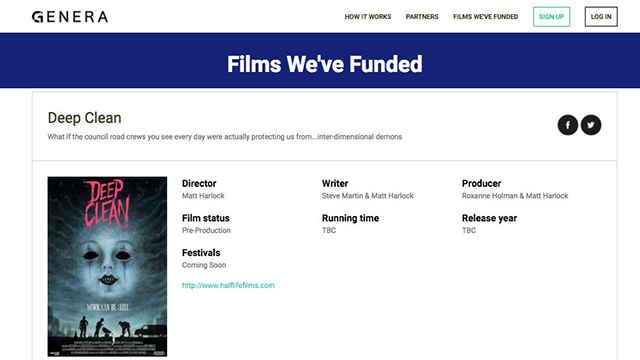 And so to pre-production costs

Well we have been in prep for almost 3 months, getting HOD’s, locations and cast in place for a December shoot. Juggling the people we want to work with’s schedules has been the usual trial, but we are getting there, but we have also had some slight surprises on the cost of locations we wanted, and various other elements on the production design side such as sets, vehicles etc.

And then, interestingly, we had this happen rather a lot...

“Oh no, I missed your campaign!”

A rather large number of people getting in touch and saying “It’s finished? I wanted to donate to you but I was out of the country/waiting to be paid/plain old missed it.” Or the other one, “I don’t do internet banking/give my bank card details to strange websites”. Some of them I think might’ve even been secretly pleased about this clever swerve to give you their money.

And then, this happened - an opportunity appears on the horizon…

Our friends at Territory Studio (who are doing the Deep Clean VFX) ask if I have any ideas for a MCM Comic Con panel (they are doing a Bladerunner 2049 one) – and strangely enough I think we might. “The Horror, The Horror: from comics to live-action monsters”. 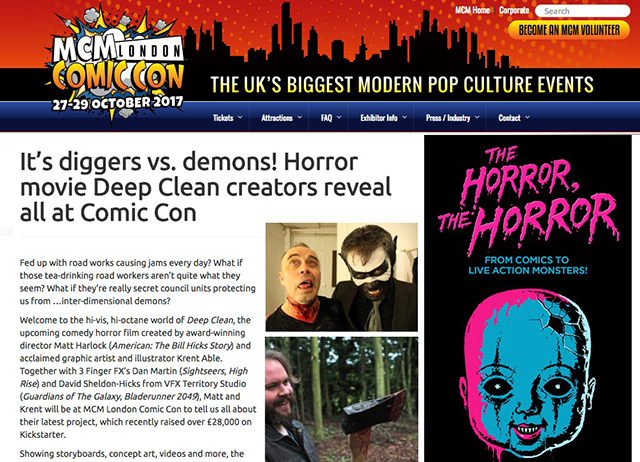 So this panel will be the story of Krent and mine’s journey from Ink, Cocks & Rock’n’Roll to the Deep Clean concept, through the perilous rollercoaster of the Kickstarter and into pre-production with our amazing collaborators Dan Martin (who I love even more for sending a picture of him with an axe for his headshot – see above) & Territory Studio, who will join us on the panel to take us through their process of working with filmmakers.

The venue at Excel is the Gold Stage – we are on at 12pm noon this Saturday 28th October, and the room holds 1700! We have been planning and prepping this now for some time, creating special video clips of the doll maggot evolution, and getting ready to share our knowledge of what we have learned. And this I feel is a big takeaway — if you are prepared to bite the bullet and put yourself out there, these kind of opportunities will hopefully come your way.

Okay then…so here is our equation:

We have decided to launch a new £5k crowdfunding campaign on Indiegogo. This is to accommodate all the numerous people who still wanted to be part of the Deep Clean journey. But it also means we can really elevate our production with improved SFX monster options, more VFX and access better locations, and maybe some sandwiches too. We could really use it.

Please consider donating to the Indiegogo campaign if you might be so inclined – it runs to Dec 14th.

We are totally committed to making the best film possible, and if there are new friends who want to join us on this fun journey, we would love to welcome them onto the Deep Clean crew.

This process has not been without extremely stressful and nerve-wracking moments and heartache, and I am sure there will be more to come with the film itself, but perhaps I might give a man with more wisdom and life experience than me the last word:

“Life should not be a journey to the grave with the intention of arriving safely in a pretty and well-preserved body, but rather to skid in broadside in a cloud of smoke, thoroughly used up, totally worn out, and loudly proclaiming ‘Wow, what a ride!’"

Please do join us at Comic Con this Saturday, thanks for reading! 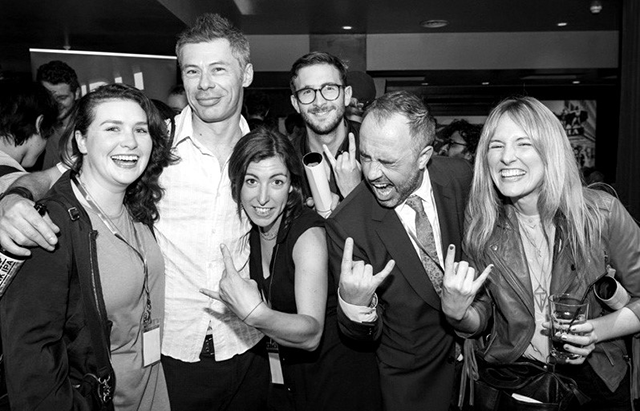 Here is Matt talking about many of the aspects of the Deep Clean crowdfund campaign to the MA students at Sheffield Hallam University during the campaign — how the campaign was put together, what we learned, tips & tricks, which ties into one of the big takeaways…

Sharing our experiences has led us from LOCO, to Sheffield, to Comic Con – hopefully generating audiences and interest in the project as we go, but more importantly, giving something of what we have learned away, not monetizing it but for free, because that’s how we learn from each other and move forward as a film making community.