Ashley Way (Doctor Who, Merlin) shares his experiences of working with CGI, passing on some vital tips for those looking to follow in his footsteps: 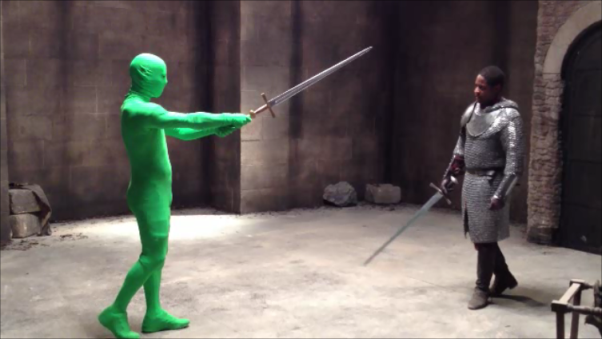 An "invisible" sword fight takes place on the set of Merlin, directed by Ashley Way.

Growing up during the late '70s explosion of the special-effects blockbuster movie, I didn't ever know I could become a director. I loved science-fiction and action-adventure unconditionally, not once questioning the reality of those magical worlds I saw on screen. My great Eureka! moment came, belatedly perhaps, when I was a 19-year-old animation student. One afternoon I watched two films which had, quite by accident, a voyeuristic theme and by watching onscreen characters who were in turn watching or being watched, I suddenly became intimately aware of being manipulated by a director. The films are stylistically very different (Coen Brothers' Barton Fink and Polanski's Repulsion) and this diversity allowed me to appreciate how my gaze was being controlled by each filmmaker. Before then I was hazily aware of the job of a 'director', but now I felt exhilarated knowing that distinctive choices were made by different filmmakers to produce unique results. Imaginary worlds were now accessible, and they didn't have to be in outer space.

I didn't choose to become a director who works a lot with CGI. University had exposed me to the genius of Welles, Wilder, Lynch and Scorsese. When I personally encountered “visual effects” nearly twenty years ago (as an AD on a film about fairies) I viewed this digital necromancy with suspicion. I knew by then that directing is not only about making choices of what to put on screen, but it's equally as important to consider what not to put on screen, a process of constant editing and discarding of anything erroneous or artificial. The big budget special effects of Hollywood had become accessible to low-budget filmmakers and television producers, but lower cost meant lower quality and too much of the early digital effects lacked the sophistication of today's effects. Their technology was conspicuous, exposing themselves as artificial and untruthful. They begged too great a suspension of disbelief, and were often used gratuitously. But very quickly the technology improved, the joins were less evident and the magical worlds returned. 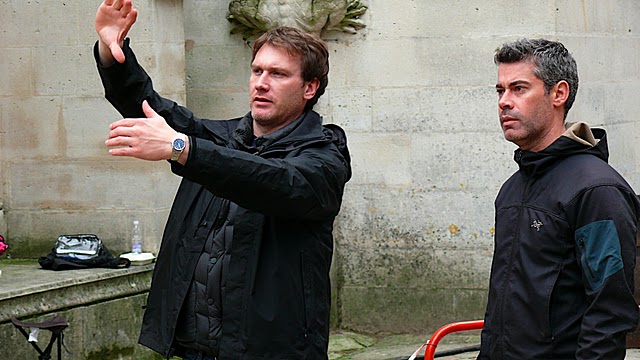 As an AD I'd worked with old-fashioned matte-painting on glass (a painstaking process of multiple exposures to 'paint in' a desired landscape) and although it was rudimentary by today's standards it was a tangible, physical process which had been used for 100 years. With the advent of non-linear technology the old ways were replaced by new. It felt like a revolution. I was fortunate to work on a variety of effects-driven made-for-tv movies and so learnt about digital effects when they were emerging as a force to be reckoned with in popular television. Although my first forays into directing were strictly non-effects affairs, I was able to use this CG experience whilst working at BBC Wales when I was asked to shoot some web-based episodes for Doctor Who. There were some digital effects, but also lots of problem-solving to be done in-camera. It often felt like I was invoking the spirit of George Méliès; my animation training came in very handy when working with CG in the way that it teaches economy of shooting and a visual sleight-of-hand.

At the beginning, working with digital effects, and digital effects people, was very daunting and technically demanding. It was like learning a new language. There were suddenly many more technical restrictions placed on me, and many voices and opinions which challenged my creative vision. The tail can wag the dog if you're not careful. I had to accept compromises, but also be very clear and direct about my vision. There seemed to be so many do's and don't's, such as keeping the camera locked-off or not moving characters in front of the effects unless they're against green, but as soon as I'd grasped a few basic rules it was easier to manage and to stop seeing CGI as a dark art but rather a useful tool. Even with ever-advancing technology the same rules still apply, and although the latest software can cope with most things now, working in television I find that the CG budget is the greatest restriction. You can move the camera or characters, but frame-by-frame rotoscoping is costly so to be avoided if you're to keep on schedule and within budget. To that end, an honest relationship with my special effects supervisor is important, and understanding how the way I shoot something might affect visual effects in post-production is invaluable.

"From shooting a lot of sci-fi and action-adventure I've come to the conclusion that, far from using CG as a narrative crutch, these genres demand a lot more from a director in creating a world".

Storyboards are crucial, although when I first used them I feared that sometimes the process could become too mechanical and predictable, and the finished scene somewhat lifeless. So I like to move the camera if I can, or produce movement in post-production if I can't. I think shots which are created totally within a computer are less successful, so I try to shoot as many 'real' elements as possible to be placed into a composite shot. (For example, we created a matte-painted landscape for Doctor Who made up of several different elements- real mountains, cut-out houses, 2D CG mine shaft and real grass in the foreground, waving in the wind). With action, I like to keep the sequences simple and to shoot as much in-camera as possible, using the CG to fill the gaps in what we're not able to achieve physically. It sounds obvious, but I think it's important to conceive them as scenes which contain some CGI and not CGI scenes.

Ultimately CGI should be invisible, or rather “unseen”. That's not to say, though, that it always needs to be 'realistic'. I've used CGI in historical and contemporary drama, where it needed to fit un-selfconsciously into the story as a digital matte painting or action effect (not to mention 'painting out' anomalous objects!), as well as more 'overt' use of CGI in science-fiction and action-adventure. The task, as with any narrative, is to invest in the human interest, however fantastical the story's realm, so that the viewer can suspend judgement of the storytelling technology. From shooting a lot of sci-fi and action-adventure I've come to the conclusion that, far from using CG as a narrative crutch, these genres demand a lot more from a director in creating a world and facillitating the audiences acceptance of the story's innate rules, however implausible they might seem. 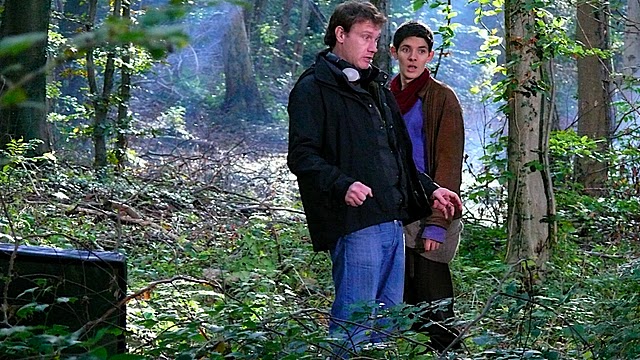 I always try to keep character, emotion and story at the front of my mind and hopefully imbue these in the CGI shots. If a character is looking out over a fantastical landscape, I might concentrate firstly on the character's reaction shot, making the scene more about him than the view. If the visual effect is impressive it's very easy to let this dominate the scene, so I have to keep telling myself it's a tool to tell the story, and the story comes from a character's experience. This can get tricky when shooting longer sequences. On Merlin, for instance, we had a sequence where Sir Elyan tries desperately to free his captive sister, Gwen, in a fight-to-the-death with an invisible swordsman. Filming involved swords shot against greenscreen, 3D digital sword-building, set extension, men in green body suits and actors fighting imaginary foes, all of which was shot over a number of non-consecutive days on two cameras. Utlimately Elyan is killed, so we had to keep in mind his growing fatigue and frustration and the experience of the other characters in the scene whilst shooting all the different elements. It was very time-consuming to shoot the technical requirements, but I also had to make sure enough time was given to the important part of the scene. In story terms it was foremost a scene about a tragic and unexpected death, not a magical “man-fights-sword”.

"When working with actors on CG sequences I try not to be too descriptive, giving them only the clear details they need to know for specific actions and reactions".

When working with actors on CG sequences I try not to be too descriptive, giving them only the clear details they need to know for specific actions and reactions. I like them to inhabit their own imaginations. From experience, descriptions I might give could make their responses less intuitive, too much of a conscious thought. There's already too much going on to dampen their instincts.

My seven year-old son enjoys the popular programmes I make, but he responds most animatedly to the stories and characters. Any effects merely facilitate the drama. As my career has progressed I've found myself trying to balance the more 'commercial' CGI projects with projects which don't contain any CG at all (or at least not in their oiriginal conception!) It's not that I buy into a bias against fx-laden popular drama, I just like to keep exploring different worlds. I love the variety of my work. It's satisfying to do 'serious' drama, but every now and then I like to return to outer space.

Great piece Ashley, I commend your ability to spin plates on set and in pre/post without losing your vision. Not all are aware of the challenges you face working with CGI every step of the way. Reflective props, artificial aesthetics in motion capture plus a myriad of period costumes/sets in the frame represent all of the typical ingredients for a tough key even in the best of conditions. It must be a strenuous task to get into the right mindset of balancing character and emotive direction, all whilst making sure the technicals can be achieved at the same time. A first-class team to fall back on helps massively in this regard. We are in total agreement that younger audiences interact and appreciate character development through storytelling far better than pure all-encompassing effects (television is now fan-driven thus thrives upon its legacy viewership's habits), whereas features cannot reap those same rewards in such a short time frame due to a 'sequel trope trap'. Mad Max: Fury Road had a troublesome time with some critics; trying to find their visual storytelling balance and largely like yourself, also worked with storyboards for the spine of production. In your opinion, what would be the perfect conditions for directing in a smaller studio to tackle these concerns head-on, thus be best placed for larger productions to change from their traditional settings (Pinewood, BBC, Shepperton etc)? Many thanks, Robert

Best Newcomer: what does it actually mean for your career?