The start of the last article was about community. This one starts with confidence – and the question: is there any difference between being confident, and being able to fake being confident? 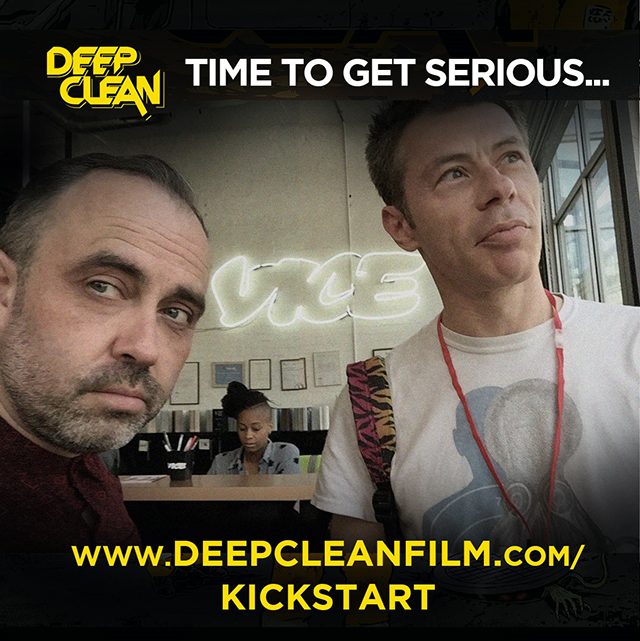 In my opinion, no there is not. So, if you do not naturally throw caution to the wind and jump (most of us), then if you want to move forward quickly, you must create those conditions to avoid the stasis and inertia that can plague us all.

Not dissimilar to giving up smoking by announcing it to everyone as opposed to trying to do it quietly on your own in case you don’t make it, the crowdfund campaign has the same highwire do-or-die aspect to it – an aim publicly stated. I am working until 1.30am and back at it by 7am – fear of public failure is greater than my desire for sleep.

But there are also other reasons aside from money. Community – energising your own existing one and a new one that will (and does) form around the project. The forming of the team – and chance to work with new collaborators.

And also, very importantly - momentum and awareness for the project. I once saw the best answer I ever heard to the ‘how do you get into the industry’ question. Mike Figgis in a Q&A at the British Pavilion in Cannes was asked by a woman how to get an agent, and told that she felt that she was ‘outside the industry’. He replied: “Unless you are Ridley Scott’s sons, no one is born into this industry. What you must do is create energy, and when that happens, people cannot help but look.”

This exercise is putting your money down on an idea – and seeing it through. Once that commitment is made mentally (the trick) and it’s going, there is literally no stopping it. This is how you fake confidence I think – by tricking yourself into having no other option.

NB: (All totals are the end of that day, not the start)

So this is where we left our story…full of excitement and beans. 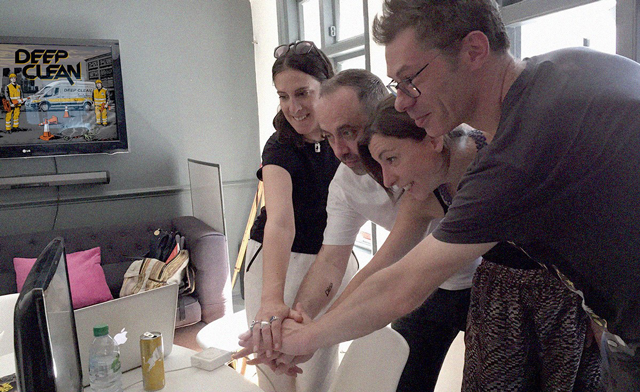 Money comes in…mostly from people we have asked beforehand to be ready to go.

Launched on a Tuesday, some money went in – around £4005, enough to look respectable. Screening that night at Shorts on Tap – literally the hottest day of the year since June 1976. No one is inside they are all in the courtyard drinking beer.

The Quietus launch Ink, Cocks on their site. Krent had previously illustrated editor John Doran’s great book Jolly Lad, and they do a really nice piece on the film and also write some very funny stuff about Steve: “Krent Able is the notorious cartoonist behind the music world’s most transgressive, funny, and downright offensive cartoons — famed for their maximalist approach to sex, violence, gore, and of course, cocks.” 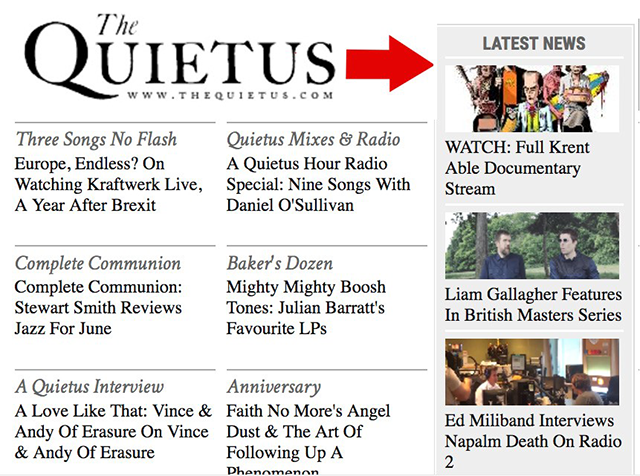 Spend last night and this morning redoing the script for an actor who we would like, a wonderful performer who can do soulful and comedic, a real combination. We have written the part for him, and I am able to get a script to him through a friend.

Record the Britflicks podcast (listen here) with top man Stuart Wright, who does sterling work publicising the British film industry’s efforts. I ramble on about alter egos and how much of a genius I think Steve is (I do). When Steve hears it, he emails simply: ”Eloquent motherfucker.” Hahaha. Probably just light headed after all the flattery. 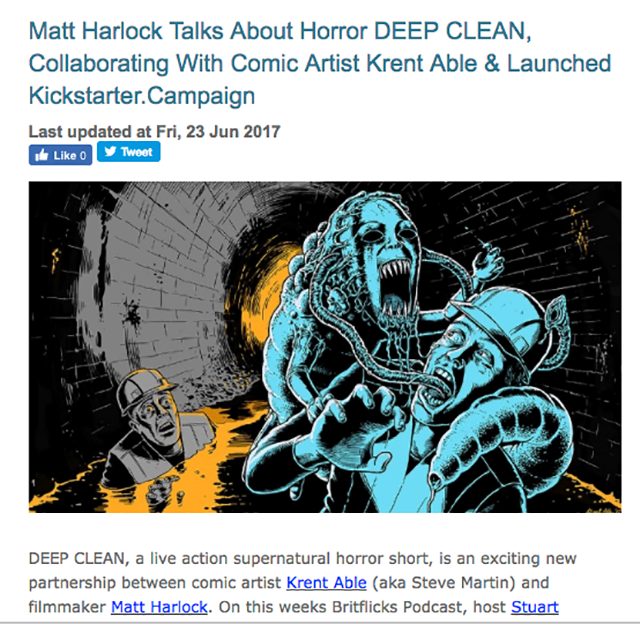 Confidence comes back into it – have heard from a couple of people I know who I had thought would contribute “Oh, I haven’t done it yet, I’m waiting to see how you get on.” This is not the first time we’ve heard this – no one wants to back a dead duck – they will see how we do. As Carlito said: “The street, she’s watching.” Haha – but it kind of feels like that.

To be seen to be doing well – to have 50% by the end of the first week (the standard metric others use for judging if you will make your total) is a real thing. Don’t keep up the pace and people will back away.

Amazing blog piece from Ben Blaine in Shooting People this morning, it’s all about community and supporting fellow filmmakers, which we agree with: “This is me unashamedly instructing you to put some money into Deep Clean.  Matt works tirelessly to support other filmmakers, not least through the increasingly essential No Direction Home. On every level he deserves the support of his fellow filmmakers.” 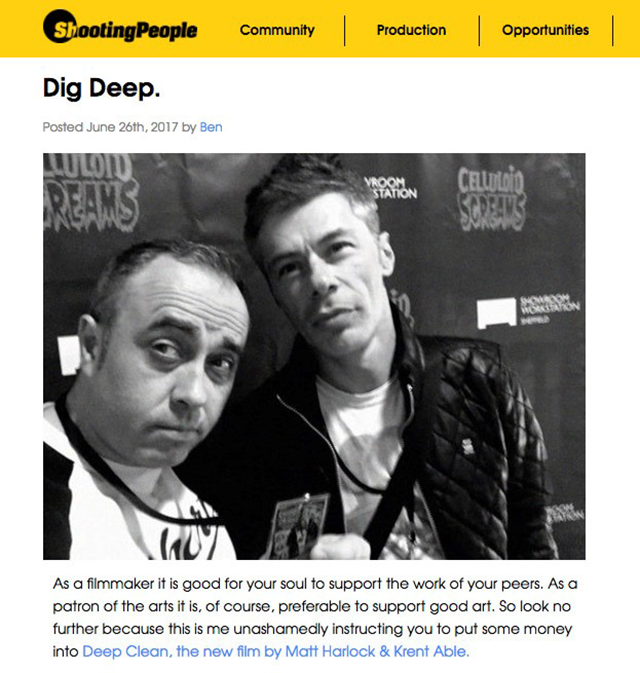 We hit the 50% mark, just half a day behind schedule.

Just as Steve arrives in the office, our potential lead actor emails back. He loves the script! This is wonderful news – no one outside our circle has really read the thing. He’s read lots of scripts. Some of them were probably good, so he would know. Great news.

The campaign starts picking up, we do £1000 over this evening and the next day – something has happened/is happening. We are getting some good traction and retweets from people with 15-20K followers with this text and the doll face image:

Laura, our social media superhero, came up with this — funny and weird in all the best ways. She also came up with “I like your face – can I have it?” 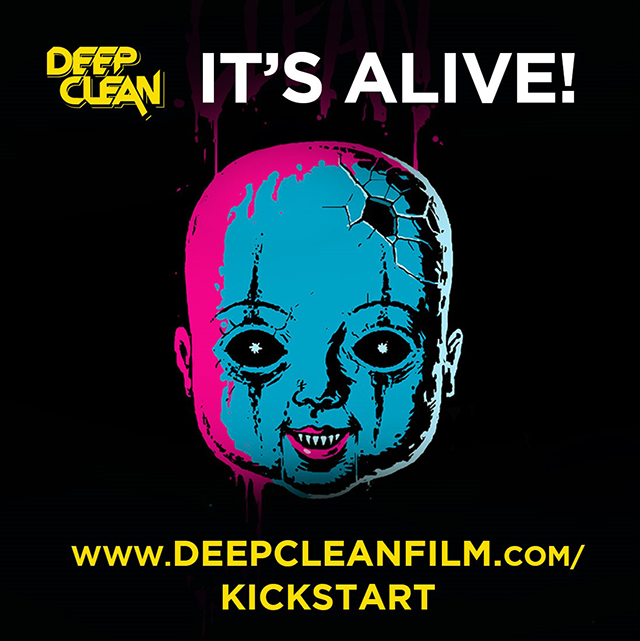 PS. Retweeting. A quick mention again for Crowdfire – if you are crowdfunding, you will need this or a similar app to schedule and cross-platform your posts (this spot is not paid for, honest).

Very interesting chat with a friend of Steve’s, Chris Baker of Dead Canary Comics, who has crowdfunded in the comics world several times. He tells me that our campaign is great but he wants to see more of us – the filmmaker and the crazy artist “That’s internet gold!” We have been emailing backers with thank you’s – but he says to make a video, low-fi, on the phone, let people get to know us.

I record a backer video, talking to iPhone in the office. Not enjoyable exactly, but it’s fine, and honest and sincere. Later Steve and I go to the office to record some more skits in our museum – me and him twitting about. We are now going to release a new video every day, and I start prepping a Deep Clean shoot for the next day. I order hard hats and traffic cones on Amazon and B&Q – fun!

On the way home on the tube, whilst planning the shoot out in my notebook, I say the word ‘Blood’ to myself, quite loudly. The woman next to me edges away slightly. I don’t blame her.

Me and Steve head to Finsbury Park and shoot the skits. The amazing thing about wearing a hi-vis top is that people really do let you walk in anywhere, including through security at the music festival site there. Fun day, (boiling hot!) can’t wait to get them out…

After our article went out on Thursday through the kind patronage of Marc Abbs and Chris Young, I arrive in the late afternoon, hang out with Harley Cokeliss and listen to Simon West tell hilarious stories about directing Cusack, Cage and Malkovich in the same scene in Con Air, all with completely different acting styles. 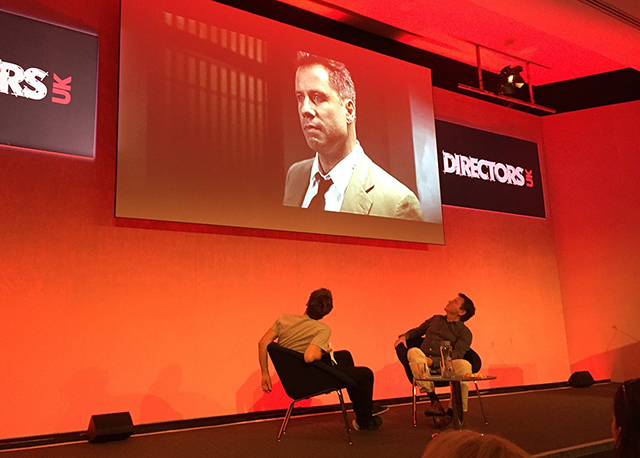 My friend Mark J. Blackman (director of the excellent festival hit short Neon) was shooting the event and we chat afterwards about all this. He is encouraging and has faith, nice to hear. We steal a “Blue Steel” in front of the logo wall. 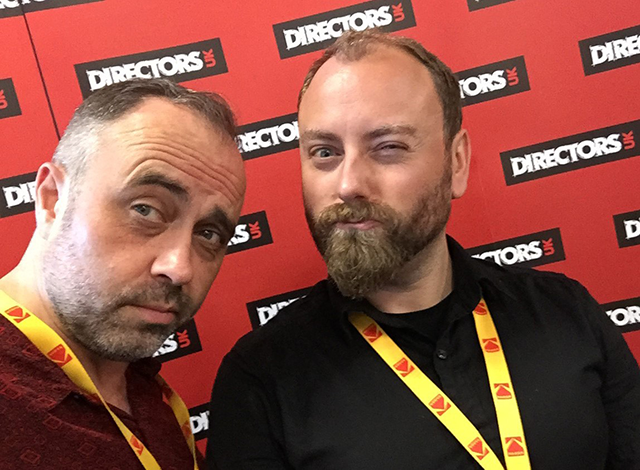 Me and Steve head to Finsbury Park and shoot the skits. The amazing thing about wearing a hi-vis top is that people really do let you walk in anywhere, including through security at the music festival site there. Fun day, (boiling hot!) can’t wait to get them out… 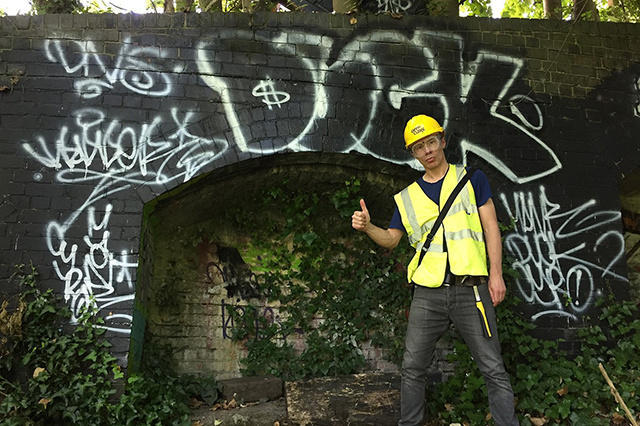 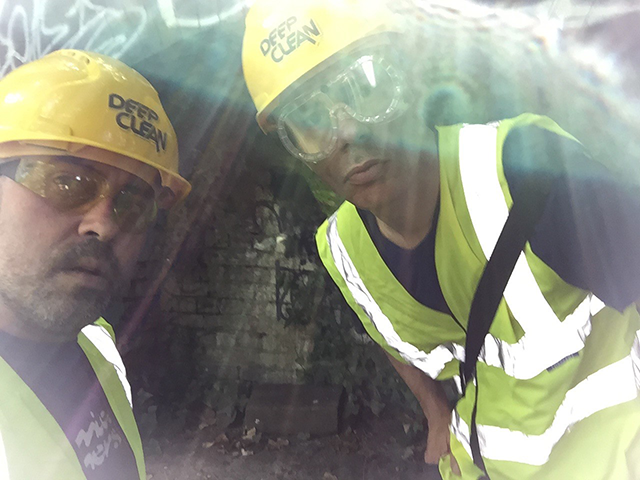 So little time – we go to note form…

Doing The Spread article for Cinema Jam (via Roxy)

Then the Bill Hicks lists & finally…

Backer video 2: The look I was going for was “shocked yet pleasantly surprised”. Nailed that then… 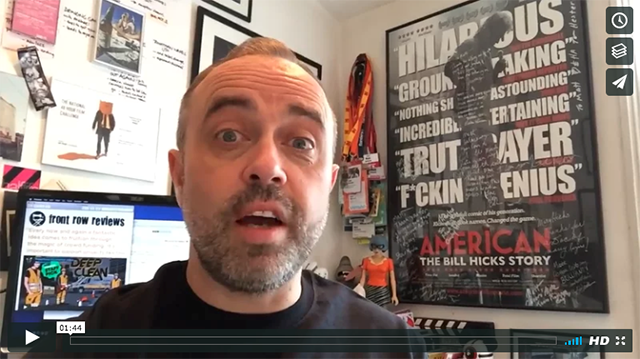 Concept shoot at Orbital Comics – me, Steve & Jason Atomic in Deep Clean suits, and my amazing photographer friend John Sanders manning the lights and the frame, we do the full ‘Aliens down the stairs’ thing, looks great, fake blood and mucking about with your mates — fun! 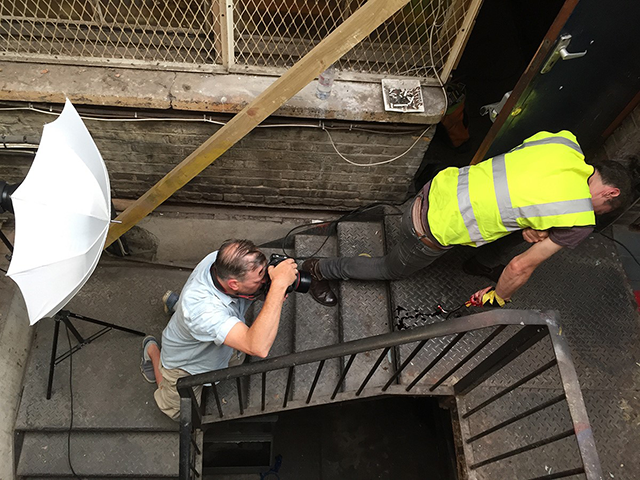 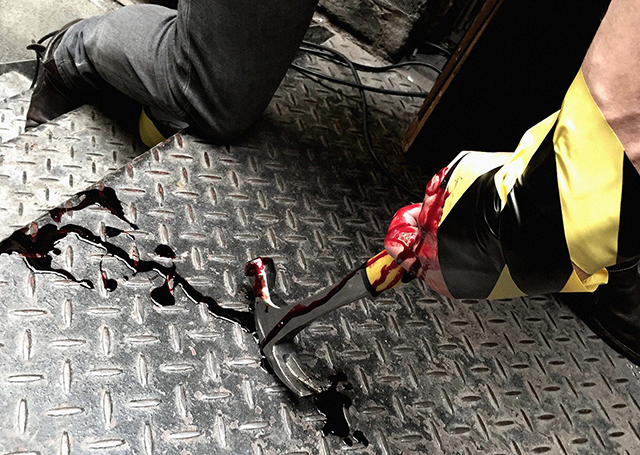 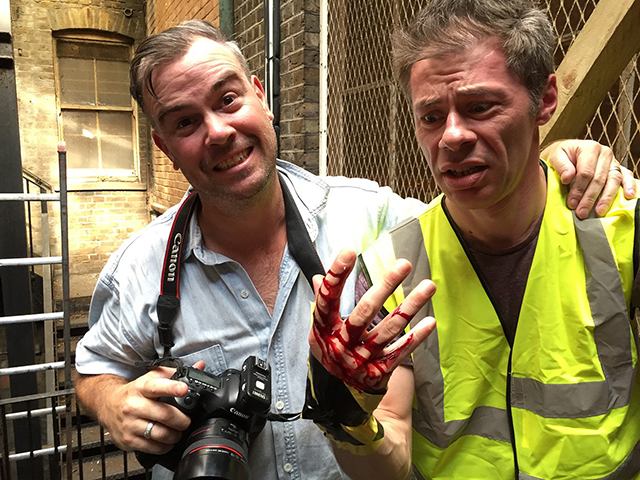 We are officially in ‘the lull’…barely £1000 since Friday. We knew this would happen but it is still very disconcerting…time to get the funny videos out, hopefully this will do something.

Steve has been working on a new poster – it is AMAZING, a real 80s throwback to Frightnight and Elm Street…we launch it as a backer gift if they upgrade or intro a friend… 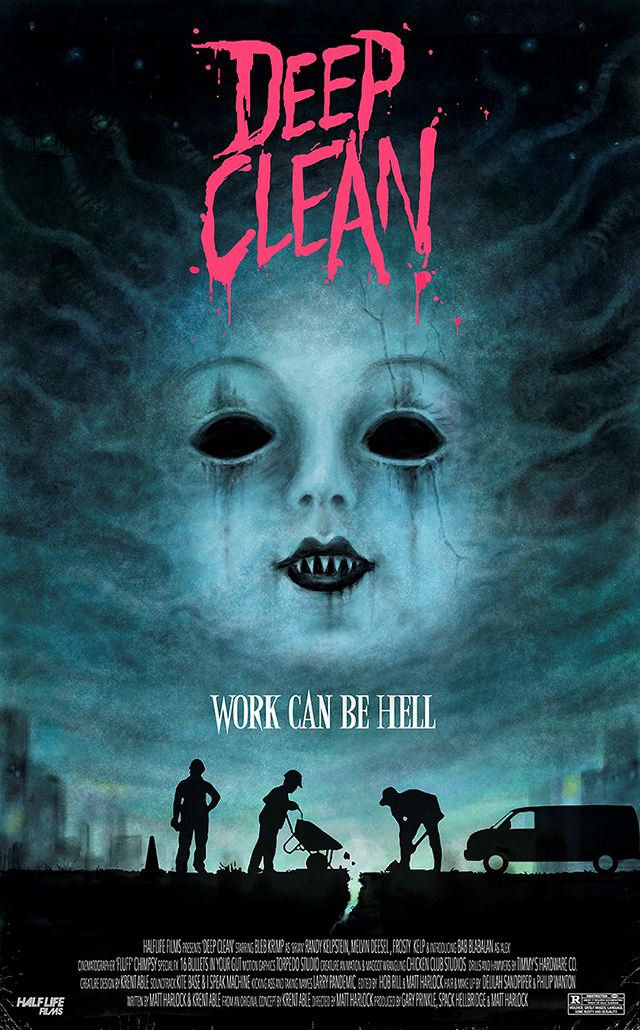 So we have edited these things together, we hope they are funny, it’s me and Krent basically mucking about in Deep Clean uniforms and investigating demon portals. I think they are funny, but don’t know if anyone else will. We also put a disclaimer on in case anyone thinks its actual film footage. These masterpieces were iPhone created (good enough for Tangerine). 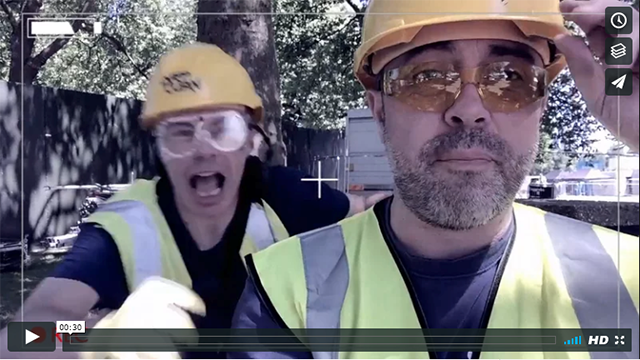 And a lovely note to end Part 2 on: Whilst doing this crowdfund, I decided to make things easier for myself by trying to organize a screening of The Conversation with one of my film heroes, Walter Murch, since we met at Sheffield a few weeks back. I have been privileged to work with the excellent team at Curzon Soho working out the details of the event — and we finally go on sale this evening…a proud moment for me and No Direction Home.

Thanks for reading Part 2 – we have 7 days to go! We would love your help if you fancied it giving the project a helping hand.

If he’s still alive Matt will be back with a ‘Did we or Didn’t We – What Happened?’ wrap-up article after July 13th. You can follow him at on Twitter at @mattharlock, on Instagram at @halflifefilms and on Facebook.