I read a book a long time ago by the masterly Kurt Vonnegut called The Sirens of Titan. In this future world on some far flung planet (Titan), they have of course moved past the need for fossil fuel and spaceships are powered by a force called The Universal Will to Become. 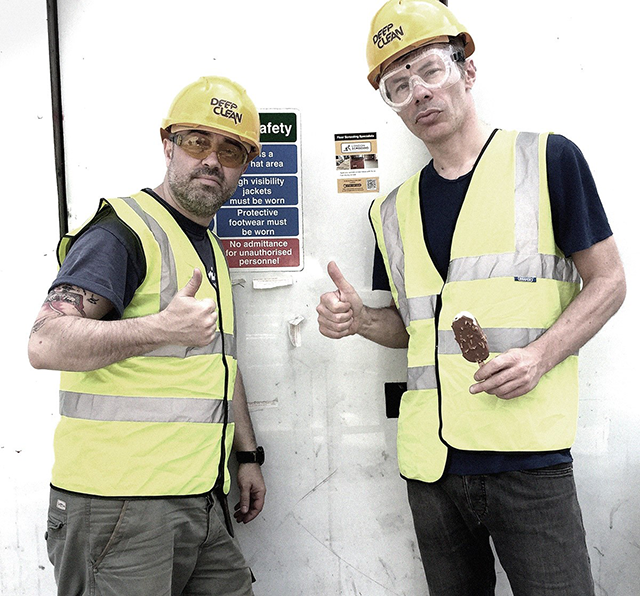 This essentially means that if everyone wants the spaceship to go ‘over there’, then it will, and this idea has always stuck with me. I suppose it’s because I like the idea that a group endeavour can effect meaningful change simply by the focusing of its collective spirit towards a commonly desired goal. And so that is the exercise that we currently find ourselves in.

When we left our littletale with around a week to go, we were closing in on £18k of a £25K goal…signs were looking good but there was still a ways to go. 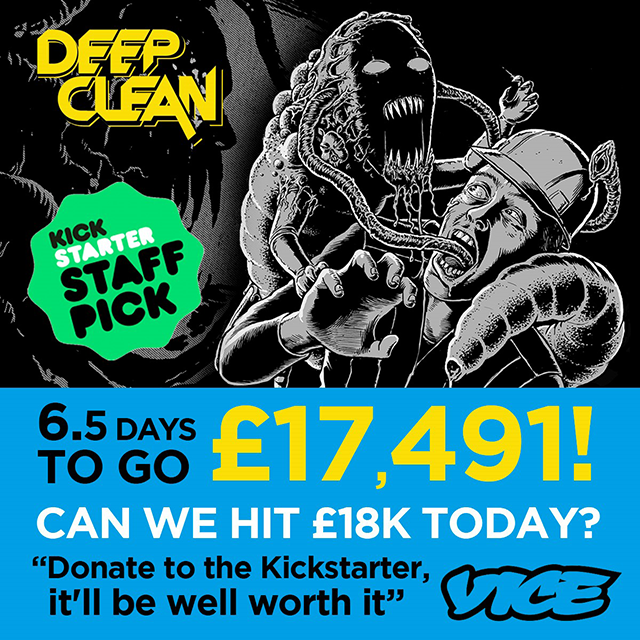 NB: (All totals are the end of that day, not the start)

After a bad night’s sleep, I head up on the early train to Sheffield on a sweltering day to go and speak to the MA students about presenting projects, in a talk that has rather flatteringly been billed as The Perfect Package, hosted by man-about-town Colin Pons at Sheffield Hallam University. We go through pitching, materials, sizzle reels and concept trailers, festival strategy, look books, and end up with crowdfunding of course – an hour and a half straight. Lunch after with the other tutors and couple of guests visiting, where we all talk about crowd funding horror stories, there are looks of knowing pain. 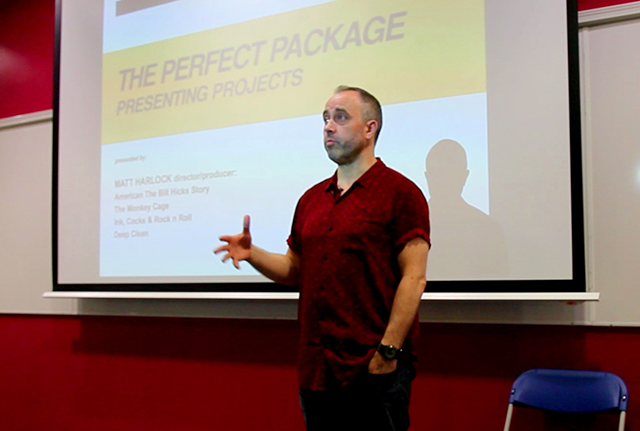 On the way back, it is baking hot. Late, I run for the train, just miss it, and end up sweating and having mild heart palpitations on the platform. If I die mid-campaign, do we still get the money?

We run a competition with Festival Formula, in which they say lots of nice things about the campaign and hit their mailing list with the premiere tickets package. I think that finding ways to successfully partner with organisations that you can offer genuine win-win interactions for them and their audience is a very important part of this process - can you offer their audience something that they actually want, and do it in a fun way? If so, then you have nothing to fear by ‘making the ask’, because it’s not really an ask, it’s an offer that they will want to pass on to people. See the Festival Formula offer here. 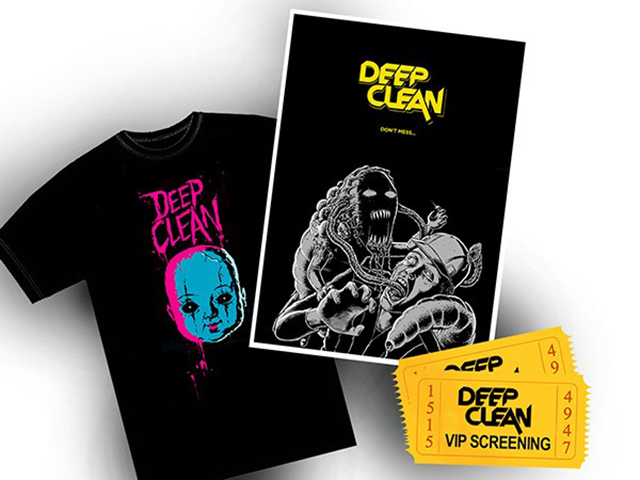 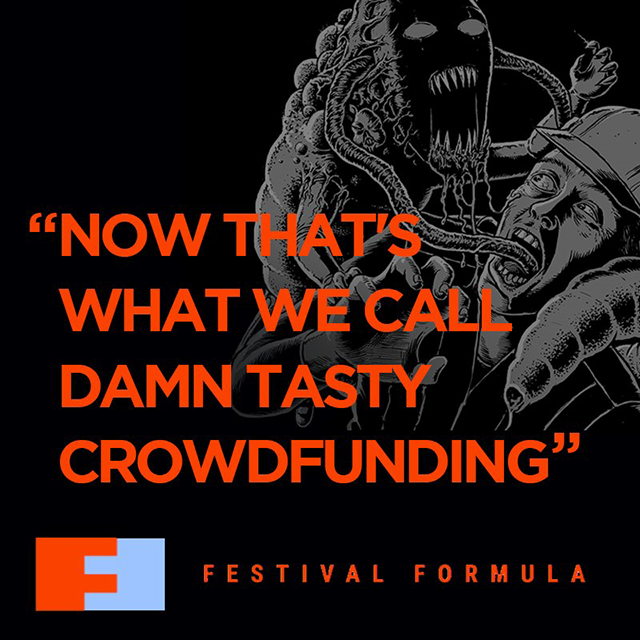 We are releasing a video a day now – either the DC crew silliness or the new ‘Museum’ videos – where, for example, we outline the 6 stages of contact you will receive from us during the campaign…going from group emails, to texts, to calling to…well, here’s the video so you can see for yourself. The video is meant as a joke but on reflection, is actually a fairly accurate representation of how this goes with people you know. Jesus, has it come to this?

I decide to make the third backer update video with a stupid promise in it – that if we hit the target, I will get the dolls head tattooed on my arm. I think that it is a great gimmick for the last day’s ‘news cycle’. Everyone else thinks this is a terrible idea, but for some reason it really amuses me – but I think there is also an important point about commitment to the cause, having ‘some skin in the game’ as it were. We shall see… 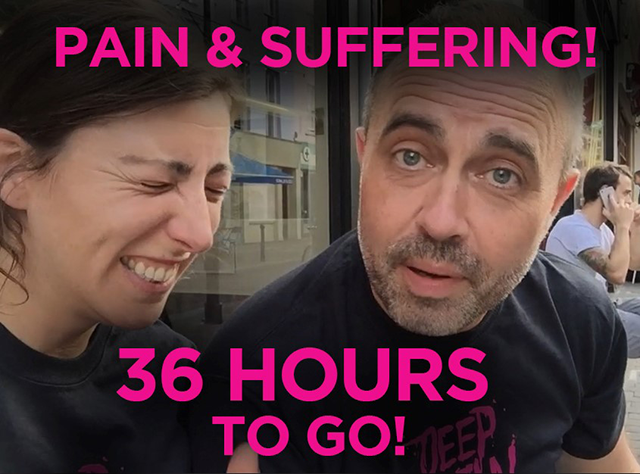 So…we start the day on just over £22k, and then…something happens. It might’ve been to do with us getting moved on to the Kickstarter homepage in the ‘Nearly Funded’ section – I think it’s when you go over 80% funded, we are not sure exactly when it went up – but then money just starts coming in. 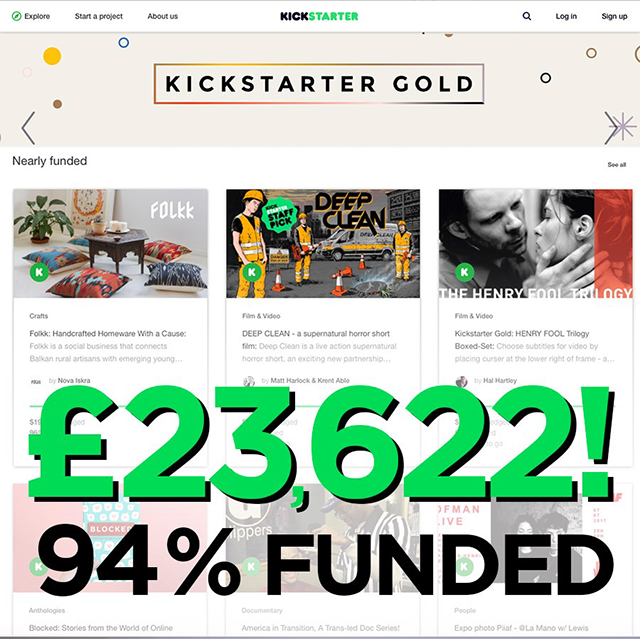 Suddenly we jump to almost 95%, but it doesn’t stop. The thing has caught on, gone wider, and suddenly it’s away, a very strange sensation as each refresh of the screen yields a new total – I had to redo the total graphic 10 times today.

The team start calling each other, it looks like we are going to hit the target tonight, a day ahead of the deadline. How amazing would that be – that we can stop all the worrying - a day early…!

It doesn’t stop over night – I think the Americans have finally found it, and when I log in again at 7am, we have taken another £2K.

We smash out our stretch goal video, hoping to get to £30K so we can make ‘The Crawler’ – a scene we had visualised and budgeted but cut due to cost. 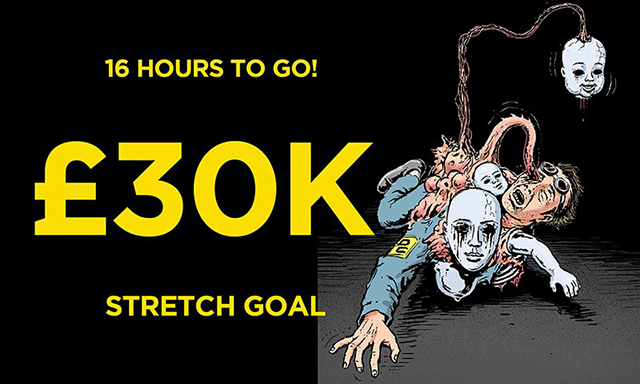 Was the HUGE excitement of the last 24 hours worth the preceding 22 days of ulcer-inducing panic? I don’t know, but we now have a fully funded short with some amazing collaborators in place and some great feature/long form interest. We are going to make the film – this is what it’s all about isn’t it? 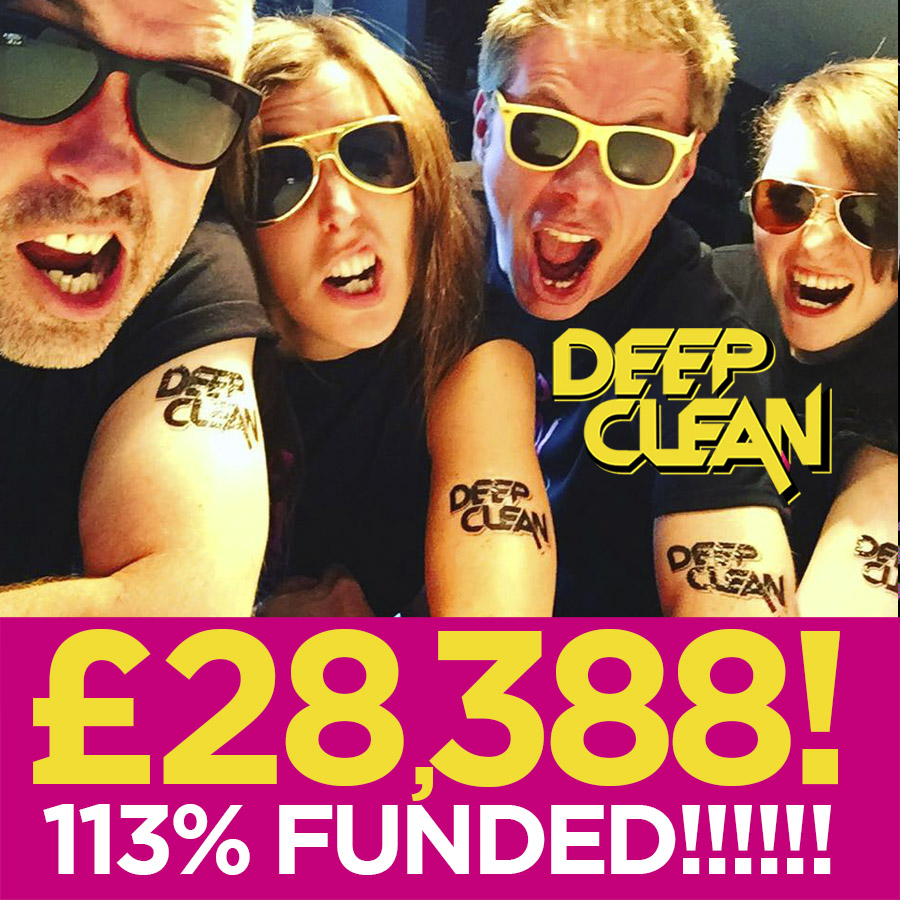 The Family Business Tattoo Parlour in Exmouth Market, where I make good on my campaign promise to get the doll’s head logo inked. My advice on this issue is, don’t get it done under your arm, it is very painful, but as it is being done, I can’t help reflecting on the similarities to the campaign – choosing voluntarily to go through short term pain and suffering in pursuit of a longer term goal. Maybe one must sacrifice, even suffer, to attain something meaningful and worthwhile, or else what is the point of…

I am making too much of this, I’m sure, but it feels like a fitting end to the experience we have just been through.

Then we take the team out for well-earned celebration drinks. The scariest moment of the night – when my friend Mark suggests that this is just a dream, and that we are actually still on day three of the campaign. I don’t find it funny. At all. 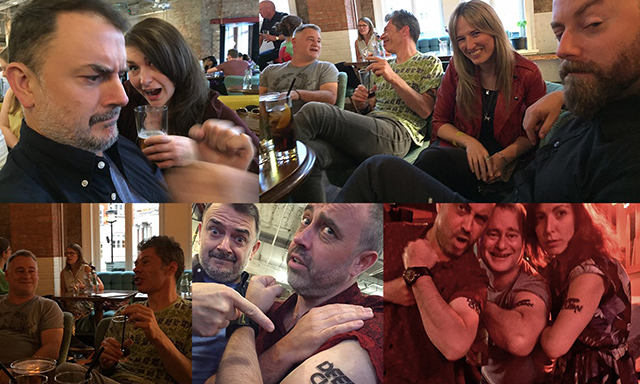 The campaign is still here: www.deepcleanfilm.com/kickstart

And here’s our final stats and the daily graph totalizer. 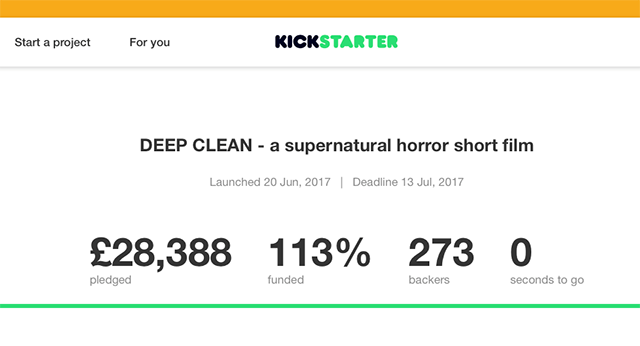 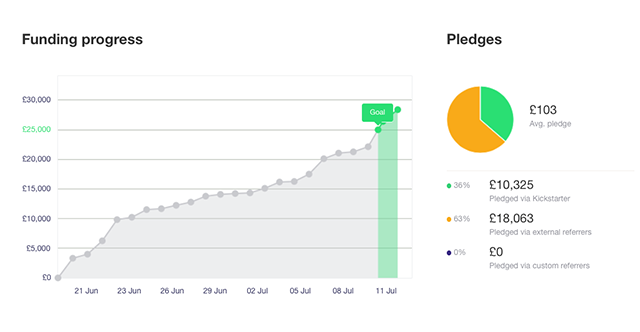 Thanks for reading Part 3 of this diary – and if you helped fund the project, may all your dreams come true and we look forward to sharing the rest of our exciting journey to make our funny, scary, weird supernatural horror film Deep Clean with you – watch this space… 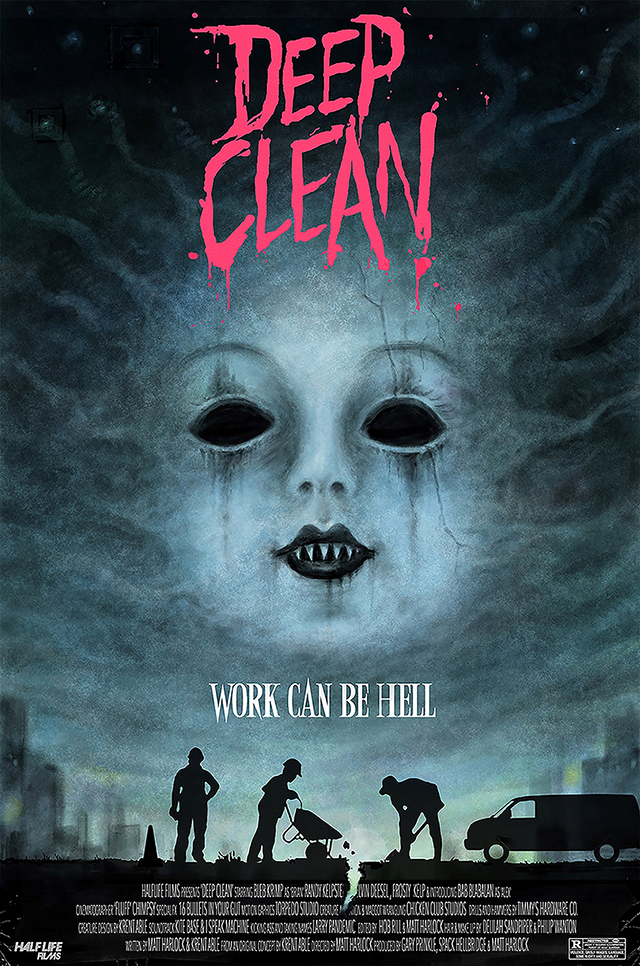 The Arri ALEXA - first time out of the box