In the fifth, and final, instalment in his review of books on practical directing, Suri Krishnamma reports on Directing: Film Techniques and Aesthetics by Michael Rabiger & Mick Hurbris-Cherrier.

This is the last of an ongoing series — click on the links to catch up with the first, second, third and fourth instalments. 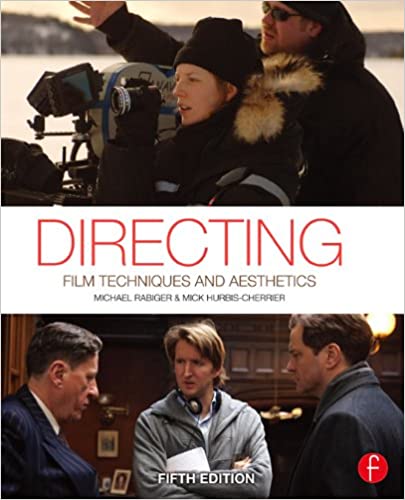 “No limit exists to the number of films the world can consume, so if you can direct outstanding screen work, you can make a job for yourself.”

Michael Rabiger is Professor Emeritus at Columbia College, USA, where he was also founder of the Michael Rabiger Centre for Documentary Film. He has directed or edited a number of films. His other work as a writer includes Directing the Documentary. Mick Hurbris-Cherrier is an independent filmmaker and screenwriter. His work has been exhibited at the American Film Institute’s National Video Showcase and at the Museum of Modern Art in New York City. His narrative film production textbook Voice & Vision: A Creative Approach to Narrative Film and DV Production, is among the core film production textbooks at films schools worldwide.

Supported by an online resource, this is a comprehensive text detailing all aspects of the filmmaking process from the director’s point of view and at the same time provides an insight into the mind of the director.  The text is divided into 8 sections:

Chapter one covers the world of the film director, discussing themes and ideas and how a director develops their own path, recognising that with digital technology, anyone can make a film relatively inexpensively.

In Chapter two the authors discuss the essential elements of drama: conflict, character, objectives and through-lines and obstacles. They give informed advice on how to shape the story into a dramatic narrative, including an explanation of story beats and dramatic units. The well-established three-act structure for most narrative storytelling is used as a template for plots that may either be character driven or plot driven. They take time to explain how the same principles apply to both short films and full-length films.

In Chapter three, The Director and the Script, some technical aspects of the process are presented, such as how to correctly format the screenplay, as well as a discussion about what makes good dialogue, suggesting that, where possible, dialogue should be replaced by action. In Authorship and Aesthetics, the writers offer their thoughts on character and points of view, covering single, dual and multiple protagonist stories.

In the remaining chapters, including A Director’s Screen Grammar, the authors cover camera movement, editing and montage. They describe principles of composition, and examine common shot sizes and shot selections, as well as the rhythm of the edit. Preproduction covers dialogue-driven and visually-driven scripts, writing breakdowns, casting and the auditioning process.

In their section on directing actors, the writers present some basic techniques, such as those that have their roots in the work of Stanislavski, and explore issues such as trust, authority, positivity, focus and relaxation. Consistent with Mackendrick’s views on acting, Rabiger and Hurbis-Cherrier advise that the director could benefit from first-hand experience of acting, also suggesting that anyone can act. It urges that a director needs to stay close to their cast, and allow them time to overcome their anxieties, but also to make sure they give appropriate feedback and notes. These may include changing their goals to avoid asking the same thing from an actor more than once, and to be careful about agreeing to give the actor another take after the director is happy; maybe once – but a pattern can emerge that undermines the authority of the director. An important tip to help maintain a connection with the actor, particularly in the modern, digital world, is to avoid sitting by the monitor during shooting.

In the chapter covering Production, the text explores how to develop the right crew for your film, giving comprehensive detail in all departments, including assistant directors, production teams, the camera department, sound department and art department.

“A director must have strong ideas about the human condition, a passion to express these ideas and a mountaineering capacity for filmmaking’s gruelling process.”

The authors advise the director to be aware that the first few days of a shoot can be filled with tension until all participants find their rhythm. Set etiquette should also include respect for everyone involved, including members of the public, and emphasises punctuality, positivity, and keeping personal animosity away from the set. In comparing the director’s role to that of an orchestra conductor, it emphasises the need to be aware of many people’s work simultaneously. The text reminds the director to keep detailed notes when shooting, particularly when preferring takes.

This weighty text is detailed across all aspects of a director’s work. The steps a director needs to take to make a successful film are well explained and accurate. While Mamet’s On Directing Film might be too prescriptive for some, this text recognises that ‘there are no rules, only what feels right’. However, the detail in this text, and its overemphasis on some of the more technical aspects of a director’s job, tilts the content more towards ‘craft’ than ‘art’; the intuition a director needs isn’t as well explored as the more mechanical steps of the process.

This complete ‘film-school in one book’ correctly emphasises that a successful film project originates in preproduction. In that respect, it details little of the on-set requirements of a director, whereas all other steps are described in detail. Refreshingly, it balances theoretical advice with a common-sense approach. This text will be of most use to young, aspiring filmmakers, the ‘text-book style’ being more suited to a university library. That is not to say it has no value for professional practitioners who are hungry for a more methodical approach to their work, who perhaps didn’t have the benefit of formal training.

Liz Mermin on directing at CERN