This week, Suri Krishnamma’s multi-part review of books on practical directing continues with a report on Alexander Mackendrick’s On Film-Making: An introduction to the craft of the director.

Last week, Suri kicked off the series by reporting on David Mamet’s On Directing Film. Read the report and an introduction to the series here. 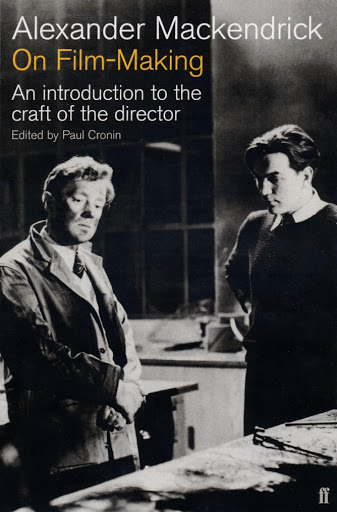 ON FILM-MAKING by Alexander Mackendrick

“Film writing and directing cannot be taught, only learned, and each man or woman has to learn it through his or her own system of self-education”

Alexander Mackendrick began his career at Ealing Studios where he directed The Man in the White Suit (1951) and The Ladykillers (1955). Moving to the US, he made The Sweet Smell of Success (1957) before joining the California Institute of the Arts (Cal Arts) where he gained a reputation as one of the leading educators in narrative film worldwide.

Mackendrick’s much-admired work uses exercises and lectures from his time at Cal Arts and is divided into two parts: Dramatic Construction and Film Grammar.

In Dramatic Construction, Mackendrick considers elements of a screenplay, the technicalities of directing, and the process of working with actors. He explores where ideas come from and how to nurture them into stories, moving on to how to build plot and sub-plot structures. He discusses the pre-verbal language of cinema, and our innate impulse to tell stories, reminding the reader that storytelling is an ancient art. Practical advice is offered in the section ‘The Director and the Actor’, covering the distinct requirements of the screen actor and the importance of the actor/director relationship.

He describes the characteristics of a director as someone who is absent in manner, detached, in their own world – someone who is playing the movie out while putting together the pieces. He suggests the director is the audience, watching the film, the invisible ‘Imaginary Ubiquitous Winged Witness’ - making leaps in time and space to ‘see’ the film from the right place – knowing where to put the audience and therefore the camera.

Mackendrick confronts one misconception about directing – that a key role of a director is to direct actors. Instead he asserts that what the director does is direct the eye of the audience, rather than directing actors. He adds that often the director can emphasise what is significant by underemphasising what is not  - so, for example, the absence of sound does not create silence, but a clock ticking does as we would not normally expect to hear it.

In Film Grammar Mackendrick acknowledges Eisenstein’s influence, his views consistent with Mamet’s argument about shot construction. He describes how the juxtaposition of shots is the essence of cinema - each shot is without meaning until it is juxtaposed with another and another in an edited sequence. He argues that the geography of a scene must be immediately apparent to an audience, a sense of place in the scene’s single space - something Aristotle explored in one of his three unities, ‘unity of place’. Further in Film Grammar Mackendrick takes the reader through the development of editing, the importance of point of view, axes, eyelines and camera set-ups.

Mackendrick’s influential text is written in a conversational style and is therefore accessible for all readers. He offers practical advice, including exercises, without getting bogged down in minutiae. Using his many successful years as a director as his main resource, he gives good tips on how to build a successful actor/director relationship, and his use of exercises and lectures from his years at Cal Arts give this work an authentic pedagogical as well as experiential feel.

As with Mamet’s book, Mackendrick spends much of his time exploring the screenwriters craft, rather than giving practical guidance to the director. That said, the writing element includes excellent, easy to follow advice, particularly on how to write exposition without it becoming expositional. While on-set directing content is limited, the advice there is concise and easy to follow.

Of all the books considered for this review, Mackendrick’s contains some of the most useful tips for the director, particularly when considering the perplexing process of working with actors. He argues that if the director casts properly, they have achieved most of what they need to when it comes to achieving great performances. He argues that the actor is the director’s most valuable collaborator, and that the director should protect their relationship with actors by giving them their undivided attention.

A director should never act for actors, but they should try to get the actor to want what you need, ie if you have an idea for how the actor should be in the scene, try to get them to want this without explicitly saying so. He supports the view that the blocking of the scene with actors should preferably come before deciding on camera placement, but in this regard isn’t as dogmatic as Mamet, saying that in reality the process is more complex. However, he does suggest that a director would be well-advised not to take suggestions from crew while blocking, however well-meaning they may seem!

But, he argues, the relationship between the actor and director also needs to be managed. Actors should be aware of what a director is doing and their challenges on a ‘need to know’ basis. For some actors, too much information can get in the way, for others information might be useful, the judgement call being the directors. He emphasises the maxim that ‘acting is about reacting’.

On scene building generally, Mackendrick says the director should be aware that every scene is an exit from one and an entrance to another, each one joining the next to build to the plot’s climax. On writing, directing and acting he suggests you will not be good at any one of these unless you have a good understanding of the other two.

Some readers may feel alienated from parts of the text due to Mackendrick’s reliance on a knowledge of particular named films as he cites examples and builds his arguments, but that is the lightest criticism of an otherwise inspiring book.

This reliable text will sit well in the collection of any director wanting an overview of all aspects of a director’s practical activities. It supports much of Mamet’s assertions, while also serving as a good companion to Stephen Katz’s ‘Cinematic Motion’. Although its ‘on-set’ directing content is limited, the advice, when given, is concise and easy to follow, and will be a refreshing read for the less technically minded director. Its arguments are delivered with confidence, given the experiential background of the author, but also allows plenty of space for individual creativity, saying ultimately, that anything that brings the story and characters to life is legitimate.

Mackendrick, A. (2005) On Film-Making: An introduction to the craft of the director.

In addition to his directing work, Suri is Professor of Film at Norwich University of the Arts, Honorary Fellow of the Arts University Bournemouth and is a past President of the Jury for the Munich International Festival of Film Schools. He is also developing a number of new projects for film and television.