This is the first instalment of Suri Krishnamma’s review of books on practical directing. Click on the following links to read part two, part three, part four and part five.

‘For the things we have to learn before we can do them, we learn by doing them’ - Aristotle, 350 BC

In these bewildering times where freedom of movement beyond our homes is restricted, we might find ourselves gazing for longer than we would normally do at our bookshelves. Among these might be works on filmmaking - texts that we turn to in order to gain knowledge, or for cognitive stimulation, or to relieve stress at particularly challenging times - books that inspire with anecdotal entertainment or help to strengthen self-confidence.

It seems that books on filmmaking are not hard to come by, but how many actually offer practical guidance for the director? And can a text-based resource be of any real use when dealing with this intensely practical activity? How many of these books can help the director build better scenes, or give insight into how to talk to actors about performance? Which are likely to help steer them towards the most appropriate place to put the camera, to frame the shot and thereafter construct the scene?

To try to find an answer to these questions, it was necessary to assemble a list of about a hundred titles that had at least some filmmaking content, then reduce that number to just over fifty for greater scrutiny. Unsurprisingly, many of the books were poorly written, unreliable and often incomplete. Those that survived beyond a cursory glance, although entertaining and occasionally inspiring, often offered few practical insights or tips.

Texts that concentrated mainly on writing, producing, cinematography, sound or editing were eliminated. So, there would be no room for Walter Murch’s inspiring In the Blink of an Eye, or Andrey Tarkovsky’s study of rhythm in film, Sculpting in Time. Nor would there be room for such essential reads such as William Goldman’s Adventures in the Screen Trade, Sally Potter’s Naked Cinema or Peter Biskind’s Easy Riders, Raging Bulls. And while Judith Weston’s Directing Actors contains many useful tips on how to achieve great performances, it’s narrow focus meant that it, too, had to be left out. Other works, such as Steven Ascher’s The Filmmaker’s Handbook or Sidney Lumet’s Making Movies could easily have been included in a longer list.

Before making the final selection, consideration was given to the reliability of the source, in particular the experience of the authors, as well as wanting to make sure there were a range of texts, writing styles and approaches. This selection ranges from the more technical work, to the experiential, and the pedagogical.

Over the next few weeks, I’ll report on five of my chosen texts, which I hope will be of use to both the experienced and novice director, and perhaps remind us that whatever challenges we face in our profession, we are not alone. 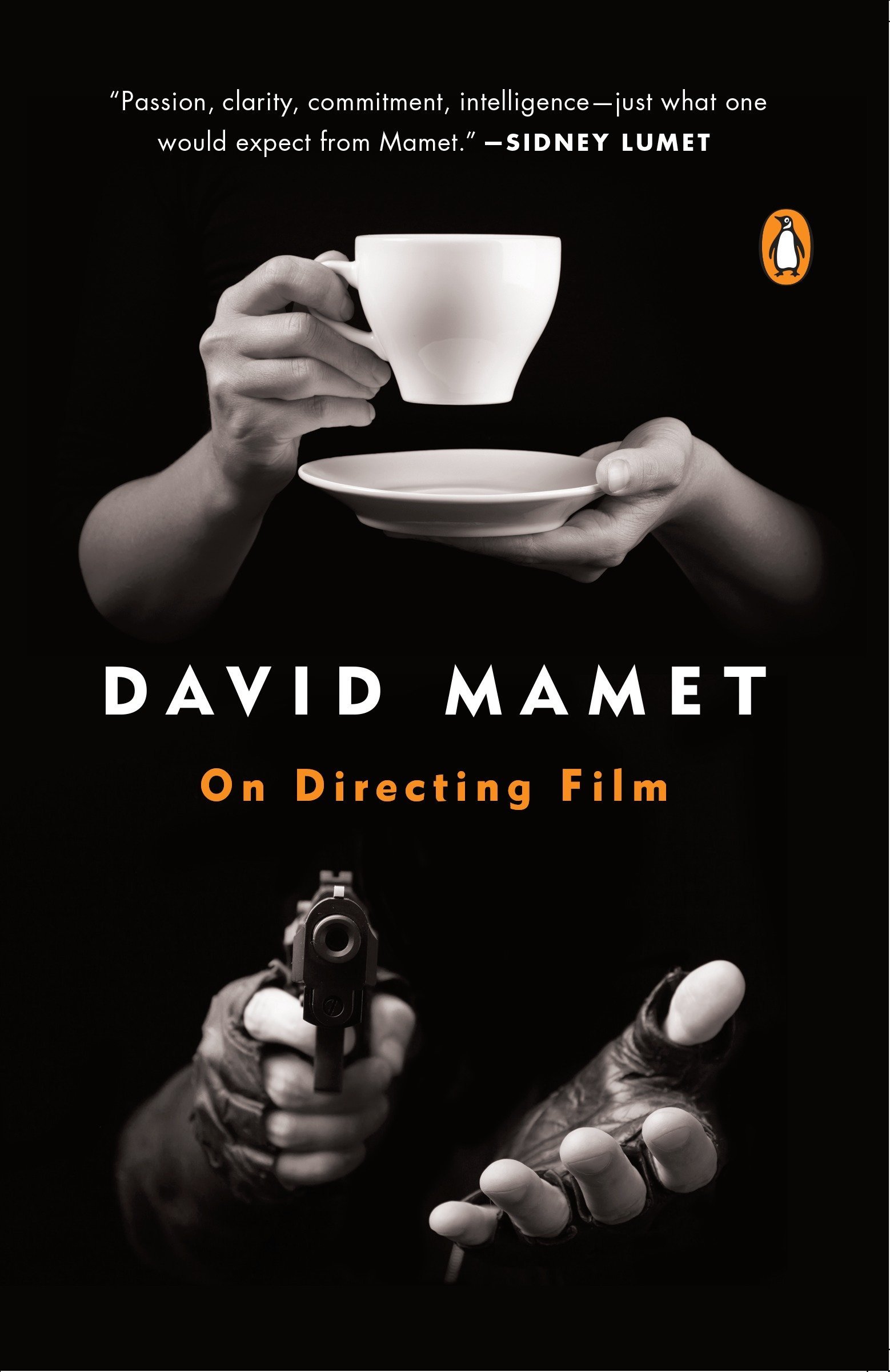 ON DIRECTING FILM by David Mamet

As a playwright, Mamet’s credits include Glengarry Glen Ross (1984) and Oleanna (1992), as a writer-director House of Games (1987), and Homicide (1991) and as a writer, The Postman Always Rings Twice (1981) and The Verdict (1982). He has written essays and books, including on film and acting, most notably True and False: Heresy and Common Sense for the Actor, as well as a trio of novellas about the psychological effects of war, Three War Stories (2013).

Using essays and transcripts from directing classes at Columbia University Film School, Mamet’s concise text deals almost exclusively with what a director does on set.

Chapter one – Storytelling - takes the reader through the nuts and bolts of how to build a scene, advising the director to take the following steps and in this order:

This methodical approach is necessary, argues Mamet, because a successful scene needs to have a logical and organised pathway, or it will lack dramatic purpose. Referencing the pioneer of montage theory, Sergei Eisenstein, Mamet asserts that good directing comes from the purposeful juxtaposition of uninflected shots to elicit emotion, the choice of shots arrived at by first discovering the meaning as well as the hidden meaning of the scene.

In Chapter two, Mamet continues to build his argument that you can’t decide where to put the camera until you have both discovered the true meaning of the scene, and then figured out how to stage that meaning. And in that discovery also lies the objective of the protagonist - because the scene ends when the protagonist gets what he wants. He argues that there is no such thing as character per se, just habitual action; character is what the person does in pursuit of their ‘super-objective’, and that the director’s job is to make the audience wonder what’s going on by putting them in the same position as the protagonist; as long as the protagonist wants something the audience will want something.

In Chapter 3, Counter cultural architecture and dramatic structure, Mamet uses the example of poor functional design in architecture during the counter cultural wave, to show how you can’t shore up your movie if it isn’t correctly designed. Audiences need easy to follow, unambiguous story beats without the need for signs or other clumsy exposition.

Among the ‘tasks of the director’ listed in Chapter four, Mamet takes aim at the Achilles heel of many directors by accusing them of too often shooting multiple takes because they don’t know what they want, a consequence of a lack of method in their approach to scene building.

“The performance will be created by the juxtaposition of simple, for the most part uninflected shots, and simple, uninflected physical actions”

On the, sometimes, mystifying process of working with actors, Mamet offers clear and actionable advice. He suggests that acting doesn’t need to be inflected, that what all actors have to do is perform the physical actions that are required by the scene, and to do so as simply as possible. He urges the director to refer actors to the objectives of the scene, arguing that the actor should do those things - and only those things - that they need to do to perform the required ‘beat’ at any given moment.

“The task of any artist is not to learn many, many techniques but to learn the most simple techniques perfectly. In doing so, Stanislavski told us, the difficult will become easy and the easy habitual, so that the habitual may become beautiful”

Mamet’s key tips for the director include:

Although written in 1987, and by his own admission based on limited directing experience, Mamet’s text is highly relevant to on-set directing with useful tips on almost every page. His is a reassuringly direct approach, the compelling text promising to deliver concise and honest advice and does exactly that. Through transcripts of exchanges with students, Mamet demonstrates that storytelling is not only intuitive, but that when we tell stories to each other we do so in shots – that we, in effect, create shot-lists to communicate visually.

When considering the shooting of a scene, Mamet is particularly critical of the overuse of Steadicam, arguing that it tends to generate the habit of ‘following the actor around’ rather than give the scene any real visual direction. That said, Mamet’s ‘my way or the highway” approach may be off-putting for some, and although he puts forward a powerful argument for his theory of how best to build a scene in practice, caution should always be taken when presented with this exclusive approach to the craft. By Mamet’s own admission, he is not the strongest, visually.

Perhaps understandably for someone who began as an actor, and from an acting family, before becoming a writer then a director, Mamet’s text puts more emphasis on writing than directing, sometimes conflating the two processes. That said, his approach is entirely consistent with his assertion that the primary role of the director is to ‘complete the work of the screenwriter’.

This is an exciting, ‘pamphlet’ sized read for both the aspiring and more experienced filmmaker. It is packed with useful tips and advice for working on-set, aimed at encouraging the director to get the best out of the script, actors and camera. Mamet’s advice is clear, logical and easily remembered. He de-clutters and de-mystifies the process and as such this text could not be more strongly recommended.

In addition to his directing work, Suri is Professor of Film at Norwich University of the Arts, Honorary Fellow of the Arts University Bournemouth and is a past President of the Jury for the Munich International Festival of Film Schools. He is also developing a number of new projects for film and television.