In the fourth instalment of his review of books on practical directing, Suri Krishnamma takes an in-depth look at Steven D. Katz’s Cinematic Motion: A Workshop for Staging Scenes.

This is part of an ongoing series — click on the links to catch up with the first, second and third instalments. 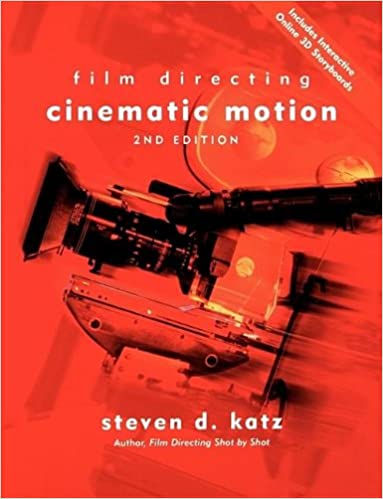 “Every day on the set a director asks himself, “How can I best stage this scene?” And every day the production manager asks the director, “Can you get all this shot by the end of the day?”

Steven Katz is a filmmaker and writer, well-respected in the field of cinematic style and technique. His main title ‘Film Directing Shot by Shot’ (Katz, 1991) is a standard work at student level. This heavily illustrated book explores how to stage scenes, then discusses where to put the camera for dramatic emphasis. It is divided into 3 parts:

In the first part, Staging: the process, Katz identifies that staging (or blocking) is at the centre of the director’s craft. In building a coherent scene, attention must be given to points of view, where to place dramatic emphasis, what setups and coverage will be needed and what is the dramatic circle of action.

In Staging: the workshop, Katz looks at basic choreography of actor and camera, including the relative benefits of location and studio staging.

And in Staging: before you shoot, Katz describes the process of breaking down a script, visually, including doing a ‘free association’ pass. He encourages the use of digital storyboards, animatics and photo-boards as part of the preparation process. He breaks down on-set directing into narrative considerations (script), dramatic considerations (actors) and pictorial considerations (camera). His main emphasis is on choreography, but also explores aspects of production managing (the director’s ‘conscience’) and time considerations.

Katz judiciously avoids dogmatic instruction, giving, for example, tips for both realists (those who put actors first, then camera) and ‘expressionists’ (those who put the camera first and then actors), suggesting, accurately, that a combination of the two approaches is most common.

Katz intersperses his text with valuable first-hand experiential commentaries from practicing professionals, including John Sayles, who previsualises everything except emotional scenes. In his interview with cinematographer Allen Daviau (The Colour Purple, E.T.) he describes how Spielberg likes to open a location with ‘masters’ – to take the audience on a geographical tour – then allows the photography to become more elliptical at a later stage. Other interviewees include Dustin (‘Dusty’) Smith, about working in confined spaces, Harold Michelson (Art Director and Illustrator) and Van Ling (Vis FX coordinator).

More emphasis could be given to how you build a choreographed scene on-set with actors and camera without detailed preparation, given that many directors prefer to leave these choices to the floor. Katz asserts that nobody on a set can make a decision as to what to do until the director has decided where the camera will be placed and how actors will move in front of the camera. He argues that there are two approaches to space: to put the camera ‘inside the space or outside the space’.

A director should begin by considering the action described in the script – this determines the basic actor positions. On acting, he notes Sayles advice on master shot v close up, ‘you don’t want an actor to spend himself emotionally in coverage that does not emphasise him’. He describes both the technical and creative processes, and advises how to structure conversations throughout the day, for example when talking to the cinematographer in the morning about the first shots, then the actors in make-up – so giving the reader a clear pathway through the day’s work.

This is an extremely thorough and comprehensive exploration of staging and where to put the camera, covering a broad range of directing methodologies. Although identifying the importance of preparation, it deals with the director’s choices on the floor and is a highly relevant text for those seeking more detailed guidance on practical directing.