Published on: 17 May 2017 in Career Development

Last year we partnered with Film London for Stage and Screen, a new talent initiative for film and television directors and producers with a genuine interest in adapting stage projects for the screen. The chosen directors were sent to see a selection of new plays at the Park Theatre in North London, followed by a networking session with the play’s talent and their executive staff. We interviewed them about the experience here.

Tell us about yourself and what you’re working on.

Fi Kelly: I’m an experienced television director and a trained script developer with a background in music, arts and comedy filmmaking. I work across theatre and film and I am currently developing several short films and am in production with a one-act play.

Damien Goodwin: I am a film, TV and video game director presently directing a number of undisclosed video game projects. As a writer I also have a number of drama series at different stages of development with various production companies. Amongst other things I am also adapting my own play into a screenplay.

Richard Elson: I’ve always directed short films but through editing I moved into broadcast drama and features. Over the last few years I branched out into documentary and theatre, so have always been interested in combining disciplines. I’m currently working on a play that’s on in June and a feature film that’s in development.

Joshua Neale: I am a director with a background in documentaries and currently direct commercials and branded film. I’m represented globally by Smuggler. Currently developing a short and my first feature drama. 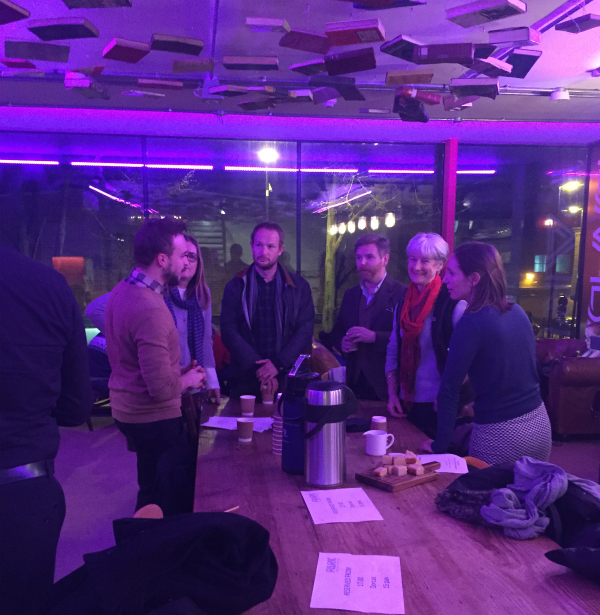 What attracted you to the Directors UK Stage and Screen talent initiative?

FK: It’s a really exciting initiative that I’d love to see continue and develop. Until now I have been very focused on directing fiction for film partly as this is my strongest skillset, but also because the two worlds seldom cross over. I realised that a lot of my experience has also been filming in and around theatre work and that staged productions are far more immediate, less expensive and can be far a more satisfactory and appropriate way to get a story made and out there.

“I feel very strongly that there should be more crossover between film and theatre directors — at the end of the day they are both about storytelling and enabling actors to create great characters, whatever the medium” — Fi Kelly

I feel very strongly that there should be more crossover between film and theatre directors — at the end of the day they are both about storytelling and enabling actors to create great characters, whatever the medium.

JN: I was looking to meet writers and producers as potential collaborators.

DG: I come from a theatre background. I initially worked as an actor and then as a writer/director and have always felt there could be greater symbiosis and connectivity between theatre and film. It’s great to see Directors UK supporting these type of projects and helping to initiate relationships between theatre and film creatives.

RE: Several years ago I directed a play that won the Windsor Fringe Kenneth Branagh drama award and I have worked with the play’s writer ever since. We have often talked about transposing some of her work to the screen and are currently working on one of her play scripts to turn it into a feature.

Which production did you see, and what did you think of it?

DG: Raising Martha by David Spicer. I thought the play was very good and entertaining. The characters, relationships and themes were compelling and I especially enjoyed some of the surreal elements of the production.

RE: Killing Time. It was interesting and inspiring, in terms of the characters and production. The characters were empathetically drawn and performed and the imagination of the direction brought more emotion and excitement to the story.

FK: I saw Chinglish at The Park Theatre, which was brilliant — fresh idea, innovative, slick staging and excellent, comic performances.

JN: Raising Martha, which was well staged and fun.

How do you think being on the Stage and Screen initiative affected the way you watched the play?

JN: I think I was thinking about the material more so in terms of potential adaptation.

DG: I think it helped me scrutinise the material differently. I was paying particular attention to the elements in the play that might help as well as hinder it becoming a film.

RE: I don’t think it changed how I watched the play.

FK: I looked at how the play might be translated into film medium. I am certain it would make a great feature, or possible TV series and certainly a very rich and funny short drama. Lots of strong and surprising characters, an unusual yet familiar setting and huge comic potential for the screen. I also took note of the cast for my own future work. 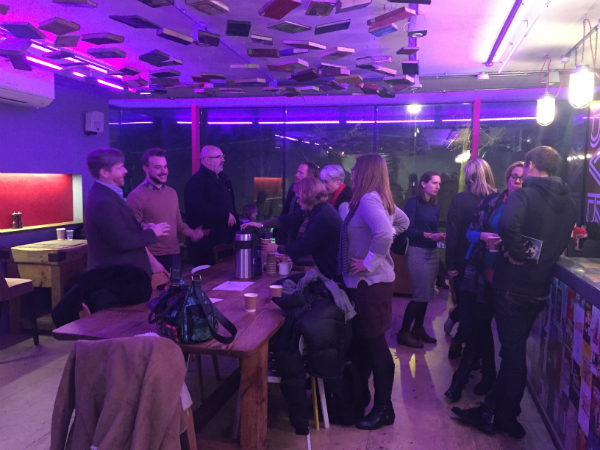 How did you find the networking process? Who did you meet, and what did you talk about?

FK: I perhaps didn’t make the most of the networking process, I would like to have chatted to the cast more. I did however have a very inspiring conversation with Film London and with Dorcas Morgan the development director for the Park Theatre.

“We discussed the challenges of mounting the production, the genesis of the play and our mutual interest in new writing” — Damien Goodwin

DG: Good. I met all the creative team responsible for the production as well as a number of directors and producers who shared my interest in the initiative. We discussed the challenges of mounting the production, the genesis of the play and our mutual interest in new writing.

JN: I met most of the other directors and producers and the writer and director of the play. It worked well to meet after the play over tea.

RE: The networking was great and I particularly appreciated the smaller number. At larger events it’s harder to make meaningful connections and there can be a competitive element of speaking to the best people for you. That can be distracting from developing successful relationships. Since Stage and Screen I have met twice with the writer of the play and we are talking about possible work together in the future. I have also met with one of the producers there and we are developing a project together now.

What do you think are the opportunities, and challenges, of adapting work from stage to screen?

RE: The greatest opportunity it provides you with is a story and characters you are sure you believe in, judged by the emotional response you have to the play. The challenges seem to be the same as bringing anything to the screen, the process of transposing the play to screen feels similar to that of developing anything for film and it certainly doesn’t feel limited having come from the theatre. If the original piece was staged imaginatively there is even more inspiration that can bring out more creativity in how you respond to the work on screen.

FK: The cost from stage to screen of course is usually the largest barrier but other than this, essentially if the characters and story are really good then most stage pieces can in some way be adapted. I saw Fleabag at the Soho Theatre several years ago and knew the central story was incredibly strong, funny and poignant but wasn’t quite sure that it would translate so brilliantly to the screen. The use of Shakespearean-style asides to the camera worked even better on camera in my opinion than it did on stage. More intimate.

I am constantly looking at theatre for new writing and talent to translate into film production, this scheme has prompted me to think the other way as well — what stories already developed for film might work on stage?

“The theatre seems to be doing more to develop new writing than film...it’s certainly a great source of potential material for adaptation” — Joshua Neale

JN: The theatre seems to be doing more to develop new writing than film. The good writers in film and TV drama tend to be very busy so for a new drama director like me the theatre is a great place to look for both material and talent in terms of writing. They are of course different media and don’t always translate, but it’s certainly a great source of potential material for adaptation.

DG:  A well-made play doesn’t necessarily make a good film, but a well-crafted play does remind one of the power of great dialogue, effective structure, complex characters and compelling relationships. In my opinion, a film adaptation would have to add something to a play. Simply pointing a camera at a play does not make it cinematic. If turning a play into a film doesn’t add something to the material there is no point in doing it. The challenge is in finding material that translates and can be imaginatively unlocked to make it a cinematic experience rather than a theatrical one.

I am particularly interested in finding stories that put performance right at the centre of a cinematic experience and this is perhaps what I find most exciting about the possibilities of a theatre-film cross over.

There’s still time to sign up for the final Stage and Screen initiative, Twitstorm, on Thursday 8 June. Visit our initiative page for more information.

When in Rome: we interview Katherine Churcher about directing second unit on Killing Eve