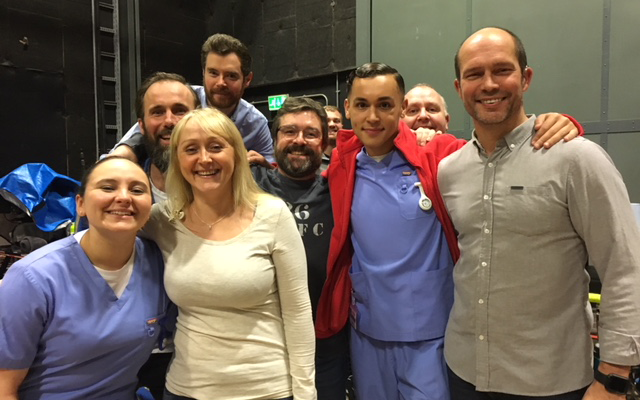 Cast and crew on the set of Casualty.

“We were guiding viewers through a fiendishly complex world of deafness, in which not all deaf people are the same.”

In July, Casualty aired a historic episode exploring deafness and its impact on one of the show’s central characters, nurse Jade Lovall. Tasked with providing an authentic portrayal of deafness that still fit the Casualty brand, the episode was the work of a deaf creative team, including actors Gaby Leon and Sophie Stone, writers Charlie Swinbourne and Sophie Woolley, and director John Maidens.

Below, we spoke to John about the creative process behind the episode, and get the technical lowdown on how he created the immersive auditory experience of ‘Jade’s world’.

So, tell us a bit about the background to this historic episode.

This Casualty episode was a ‘special’. The principal story was about nurse Jade Lovall meeting her birth mother for the first time with things going horribly wrong, but also an exploration of Jade’s deafness and how it impacts her. The regular character Jade is played by actress Gaby Leon who is deaf herself and has played the role for two years.Sophie Stone, who plays Jade’s birth mother, is also profoundly deaf. The writers, Charlie Swinbourne and Sophie Woolley are both deaf. And, as the director, I too am profoundly deaf.

How did you get involved with the production?

The Series Producer, Loretta Preece and producer, Dafydd Llewelyn, who is disabled, asked me to not only deliver a solid drama but crucially to also provide the viewers with both an authentic portrayal of deafness and an auditory experience of Jade’s everyday life.

I remember thinking, ‘wow!’ This is significant for two reasons. Firstly, it is highly unusual to have key creative talent with disabilities working on a popular mainstream UK drama. Secondly, we were exactly the right people to creatively steer this programme and see it through.

Going into production, what were your hopes for the episode?

We all wanted the drama to come off the page and Jade’s story to pack a truly emotional punch, but it was important that the audience fully understood why.

This is because, we weren’t just crafting a story about a young deaf woman who was given up as a child who eventually discovers and meets their birth parent. We were guiding viewers through a fiendishly complex world of deafness in which not all deaf people are the same, involving issues such as: social isolation, communication, lack of identity, low expectations, deaf or Deaf, language or no language, sign language or speech, hearing aids, Cochlear Implants or nothing at all, sound or silence, lip-reading, tinnitus, hyperacusis, culture clash, societal barriers, social or medical models, unconscious bias and ignorance.

Undoubtedly there was a strong story here, but it needed to be told in the right way. Collectively we wanted to accurately reflect the reality as experienced by different D/deaf people. It was also important to ensure the episode didn’t detract or deviate from the Casualty brand. 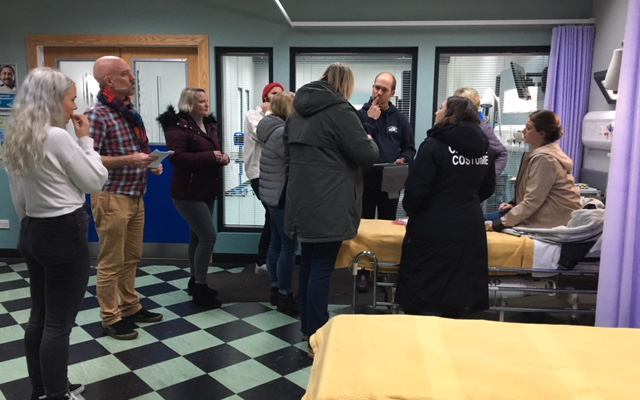 A rehearsal for Casualty underway.

Tell us about the practical side of directing this episode. How did you approach it?

Firstly, the aim was to create an authentic auditory portrayal of what Jade experiences: her deafness, tinnitus and hyperacusis. (The latter is where certain everyday sounds are uncomfortable, distorting and even painful). In addition, I also wanted to create a clear visual reference to her auditory soundscape and decided early on to use wide angle, shallow close-up shots on Jade’s face and around her head.

These two immersive approaches together became affectionately known in production as ‘Jade’s world’!

Visually, we opted to use a set of Cooke primes, to provide that gorgeous distinctive ‘look’ and super sharp, blended focus. We successfully tested and used the S5/i primes.

What challenges came up, and how did you tackle them?

One of the challenges was to get Gaby close enough to the camera lens so her face filled much of the frame while retaining sight of her surrounding environment that is narratively impacting her. Using the 18mm and 25mm lenses and losing the Matte box, we found the ideal distance was for her to be positioned 5-6 inches from the lens. This intimate shot had to be achieved and maintained while Gaby was stationary and also on the move. With the focus being so shallow, to ensure she remained exactly 5-6 inches from the lens as she walked, we fashioned a little arm from a broomstick for her to discretely hold on to below the shot! This helped Gaby keep her balance as her lateral vision was restricted by being so close to the lens. Shooting on the Alexa, I was fortunate to have an outstanding camera operator, grip and focus puller who could deliver these shots on the dolly and Steadicam both in the studio and on location. 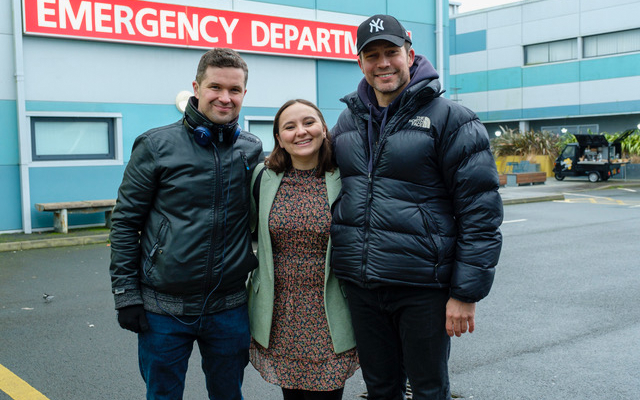 On the set of Casualty.

Creating Jade’s immersive audio world was also a challenge. To create and mimic the world as heard by Jade, we worked closely with audio specialist Dr Lauren Ward at BBC Research & Development. On set, we used their binaural head, a specialist dummy head fitted with highly sensitive omnidirectional microphones in each of its ears. The crew christened it, ‘Brian’ and he was positioned atop the camera on the dolly to record 360 degrees of sound in many of the scenes (see picture below). Alongside this, we recorded dialogue and actuality in the standard way with directional boom microphones. 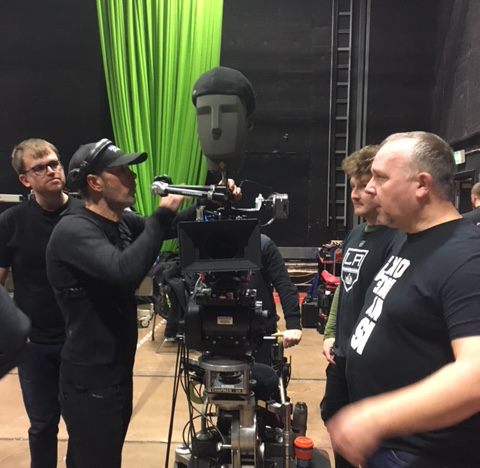 In post, the main work was to ‘clean up’ the binaural sound to remove things like the camera operator’s breathing and the entire production team behind the camera. This was edited into the Jade’s world sequences. Later, these sections of the playout were re-recorded by ‘Brian’ in a silent studio environment – which due to the COVID lock-down was the cushioned hallway of Dr Ward’s flat! This time, ‘Brian’s’ ears were fitted with digital hearing aids to produce sound as heard by Jade. Maintaining the immersive authenticity of Jade’s world in the mix, we used recognised acoustic references for tinnitus, hyperacusis and when she isn’t wearing her hearing aids alongside the binaural 3D sound as Jade moves around.

How did audiences respond?

Making this programme has been an absolute joy from start to finish. It was an exceptional team effort to harness the different technologies, approaches and technical skills to craft an authentic, immersive and emotional story. And it worked! The response and feedback we’ve had from thousands of viewers has been overwhelmingly positive and appreciative. We’ve had no end of tweets and comments from people from all over and abroad sharing just how accurately we portrayed Jade’s deafness. Including many who now understood for the first time what deafness was like for their loved ones. We’ve also received huge support from major UK deaf charities commending the episode.

It would appear that despite there being nearly 12 million deaf people in the UK — which is 1 in 6 of the population — who experience deafness, it continues to remain a little-understood and poorly-represented disability in the media.

This episode has succeeded in what it set out to achieve yet has also revealed a collective and sophisticated appetite for more technically complex, varied storytelling and told from different perspectives.

Growing up as a deaf child, I loved movies. Particularly the wonderfully visual silent films and foreign language films which always included those precious English subtitles that none of the English-speaking films ever did.

So, fast-forward to today’s competitive TV and film, where scripted and unscripted content is so vast and reactive. I believe there is an extraordinarily strong business case for the development and delivery of genuinely original storytelling of a much broader range, depth and scope of the human experience of disability to be made and created by those who know it best.

John’s episode of Casualty is currently available to view on iPlayer. Watch it here.

For more technical information on the making of the episode, you can visit the BBC website.