So back in July of 2017, I posted four diary articles (start with part one here) about our crowdfunding efforts, successfully raising £28,388 to make our comedy horror short film Deep Clean, which would also function as a series/feature proof of concept.

Co-created with comic book artist Krent Able from his original idea, then scripted, we went through casting, the shoot in December 2017 with our amazing crew, post production for six months creating portals and monsters with Territory Studio (Prometheus, Bladerunner 2049) and then a brilliant festival run starting in Oct 2018 with Screamfest LA, Frightfest Halloween, two (!) Comic Con panels, and even bagging a few awards along the way, and then launching the film with online portal DUST in June, where it now has 615k views and counting.

Since the film has just gone live on Vimeo for Halloween last week, we thought it might be an appropriate time to update everyone on what happened with all that production, post, festivals and online distribution business — completing the story of how we got from idea to funding to release, and what’s next for our team moving forward. Here we go…

Once myself and Krent had developed the script, there was only one performer that we wanted for the role of the estranged Uncle and leader of the Deep Clean crew. The problem was that he was having an extremely busy and successful year. Paul Kaye had just come off Game of Thrones playing Thoros of Myr, so we were very fortunate that he had just been eaten by a zombie polar bear, and was therefore potentially available, and luckily he liked the script enough to get on board. Tony Way we were also incredibly lucky to get as his sarcastic foil Malky, and then we worked with the excellent team at ET Casting to find our suitably put upon, rebellious teenager in Joshua Glenister, who brought just the right mixture of vulnerability and toughness to the role of Alex, the kid thrown into the maddest work experience day ever. 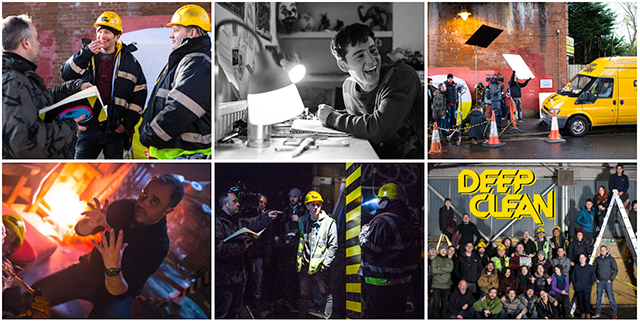 So the film is about a troubled kid called Alex who is forced into doing work experience on his estranged Uncle’s road crew, and finds out they are hiding an amazing secret -what they really do is block up inter-dimensional portals. For this we would need a road crew, in appropriate uniform, shooting on a street, in winter. Actors, costumes, vehicles, exterior locations, in December…oh yeah, and that pesky monster.

After meeting with several DOPs, we were thrilled to bag Greg Duffield (Raised By Wolves, Man Down, The Windsors) and went with an ALEXA Mini with a set of beautiful Kowa anamorphic lenses for that slightly softer look that gave everything that dirty, gritty lived in feel we were after. 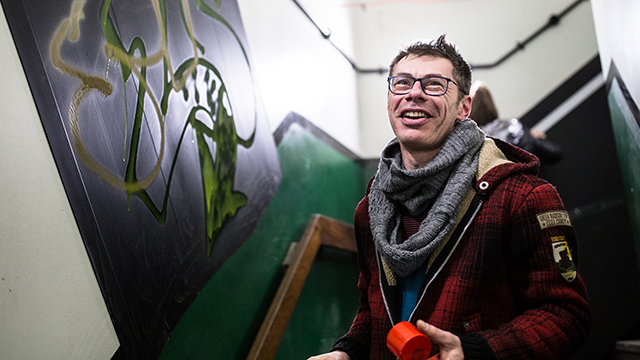 Then we struck gold again with production designer Natalie O’Connor, who had created worlds for The Fitzroy, Neon (and since us, Vita and Virginia and Dead in a Week or You’re Money Back) and was tireless in designing, sourcing, building and installing the elements of the spooky doll factory basement where our heroes meet their squirming inter-dimensional match. And then for our costumes, we were fortunate to find Adam Dee (EastEnders), who sourced and created our logo’d jackets, helmets and hi-viz vests, all bearing our Evil Dead text-inspired Deep Clean logo. 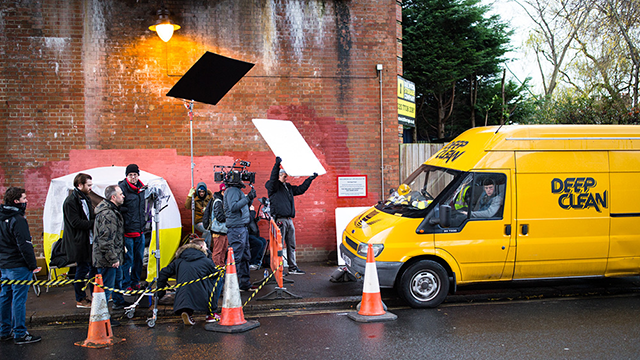 Our six-day shoot in December 2017 was divided into ‘upstairs’ and ‘downstairs’ — the exterior set in Southwark for the above ground crew scenes, followed by the interiors. We were helped immensely in finding our subterranean basement location by the ever excellent Tower Hamlets Film Office, who connected us with the CT Silver Building in Canning Town, a large complex where The Informer was currently shooting, and that we could just afford for three days (plus get in day). Mercifully rain free but bitterly cold (I only found out afterwards that the crew’s nickname for the film was Deep Freeze!), the shoot was a great team effort - there were of course issues to be navigated with driving and smoke machines, but the abiding memory is of everyone really being into it and working like hell to get it all done...props to top 1st AD Rawdon deFresnes, and co-producer Rebekah Renford and production manager Laura Kirby for pulling it all together and keeping us all jolly. 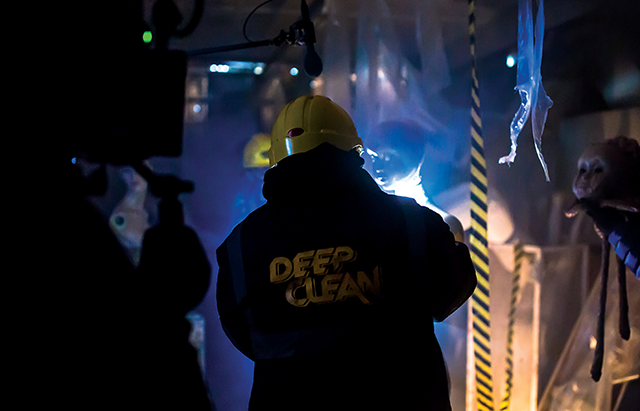 After going through an extensive design process with co-creator Krent Able (detailed in our previous diaries), we began consulting weekly and then almost daily with Dan Martin of 13 Finger FX, who has worked on Prometheus, Free Fire, High Rise, Sightseers and many more. From the drawings, the ‘doll maggot’ was first sculpted in clay, then silicon rubber, then painted, with additional moving parts (arms, mouth) to be controlled by Dan’s team on set. 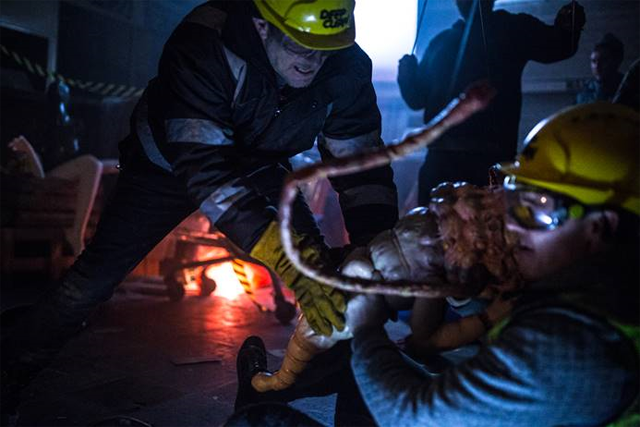 The largest task we faced on set was the creation of an inter-dimensional doorway, the portal through which our fearsome maggot beasts enter this world. Overseen by Natalie O’Connor, the portal was built into a doorway so that we could light behind it, and add rod-controlled movement to the edges. This beautiful creation took 3 days on location to make and was the toast of the set. 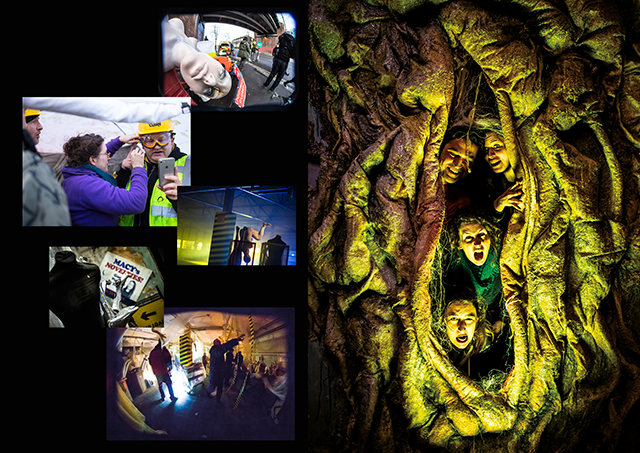 So we wrestled with the doll maggot, we wrangled smoke machines, fought the cold, and with thanks once again to our amazing cast and crew, and to our exec producers Mike Chapman, Aaron Marshall and Christian Parton of Genera Films, we got through the ‘Deep Freeze’ shoot. 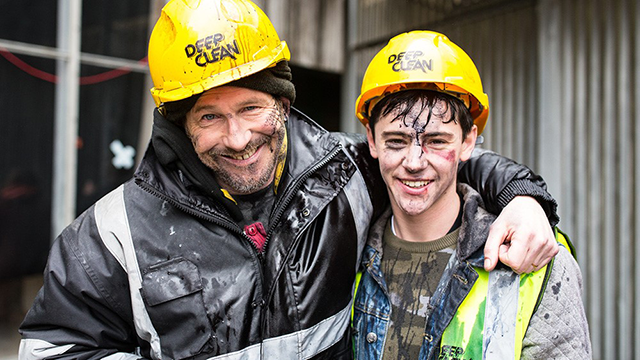 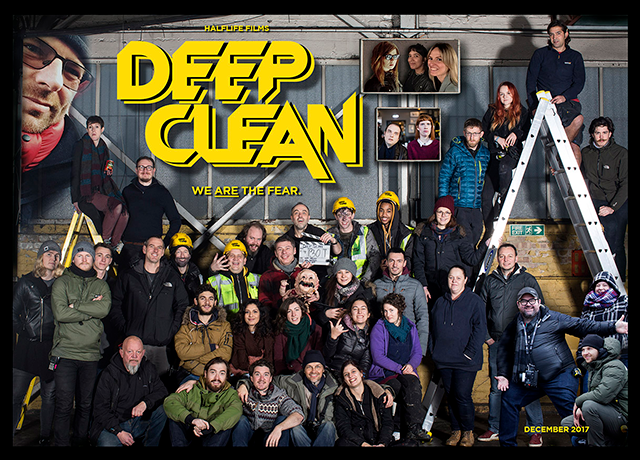 Territory Studio, it is safe to say, are used to working on larger films — like Bladerunner 2049, Ghost in the Shell and Ready Player One. So it was more than thrilling when founder David Sheldon-Hicks agreed to bring their skill and expertise to bear on our malfunctioning data goggles, possessed demon eyes and inter-dimensional portal. 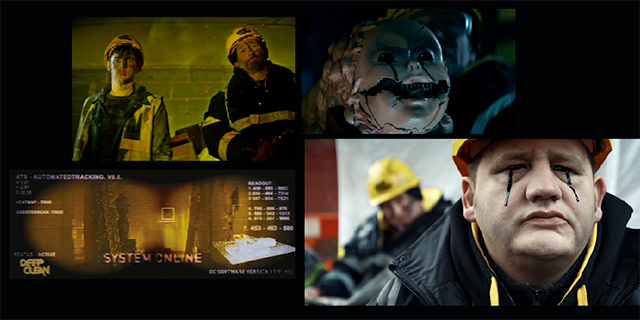 We were also lucky to work with growing effects outfit Ripple & Roll who brought the doll maggot’s mouth, tongue and tentacles to biting, screaming life.

Territory’s team augmented the internal light source and energy beams, and added the flying dust motes to the reverse shots of our characters gazing into it to mesh the shots together.

With support from many excellent editing advisors, we took the cut from over 20 minutes down to 14.07, whilst at the same time farming out shots to the visual effects teams. This was an exercise in making the visual effects ‘bed in’ to the world rather than stand out, the idea being to keep selling the amazing nature of the secret world Alex discovers being absolutely normal and everyday to the rest of the characters. We were aided immensely in this by the excellent Nuala Sheridan at Farm Group who supplied our lovely yellow and blue grade, and by Chad Raymond at Molinare, who created our sound mix. 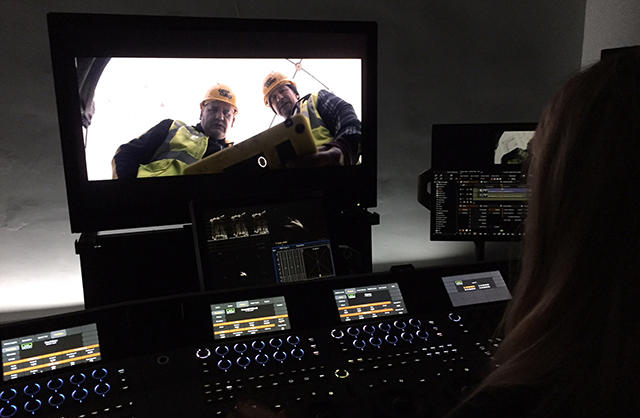 Yes, the beer is free: cast and crew

And so in July of 2018, 7 months after the shoot, we were able to buy all the wonderful people who had helped us out a beer at the Dolby Theatre on Soho Square. If you’d like to see a quick taster of the audience reactions, well, hey! We made a video. 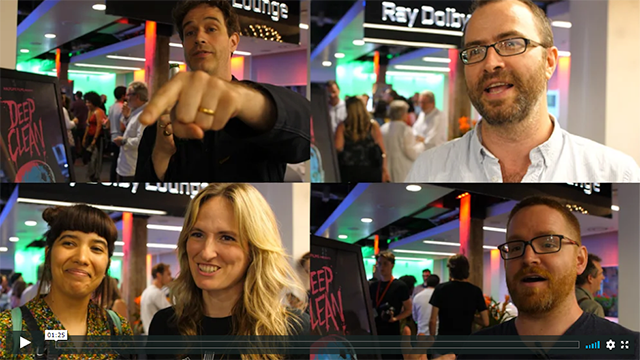 The film was lucky enough to connect with programmers at London Short Film Festival, Britshorts Berlin, Leeds, Aesthetica and Fastnet, and there were some fantastic festival highlight moments: playing Frightfest Halloween on the immense Superscreen at Empire Leicester Square, (and picking up 2nd place in the Audience vote) hosting a panel for the film at ComicCon London panel, the amazing feedback and industry reachouts we got after the US premiere at Screamfest LA and collecting Best Sci-Fi at SF Indiefest’s Another Hole in the Head, Best Short and Best Director at Knoxville, and most recently, Best Sci-fi at the Discover Film Awards. 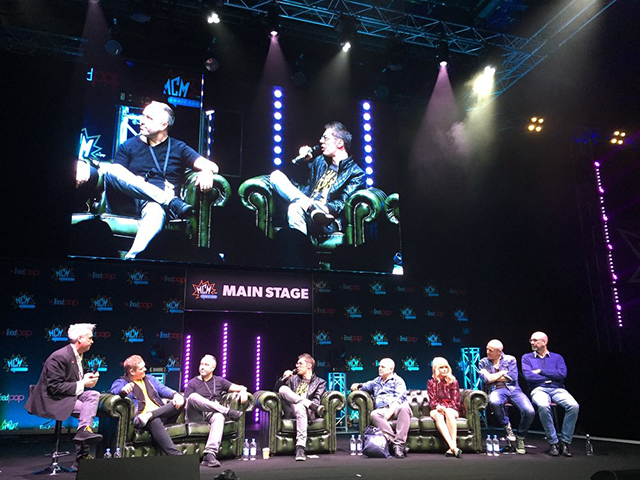 In search of eyeballs: online release with DUST

It was at our UK Premiere in Sheffield at Celluloid Screams (run by the fantastic Robert Nevitt and his team) that we met a representative from DUST, the LA-based online platform, who have 4.5million subscribers across YouTube and Facebook on their two strands, Altar for horror, and Dust for sci-fi. They have taken online rights to over 400 short films and are now producing their own content, (Prospect, online web series) and so we felt that they were a great way of getting the film to a large dedicated audience, and potentially being the right way to draw attention to our plans for Deep Clean moving into the longform. 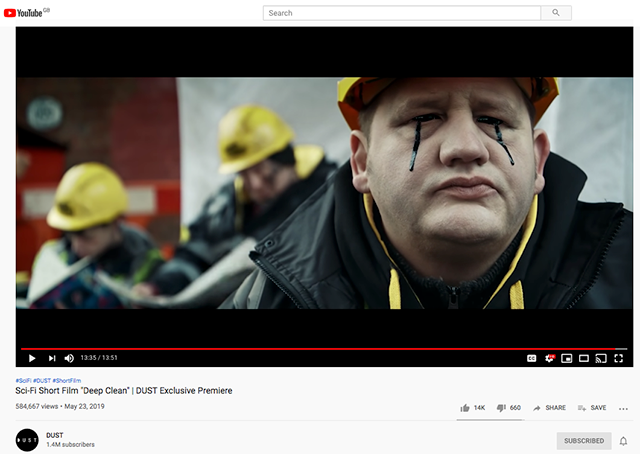 We managed to get some coverage to coincide with DUST’s online release, and felt that this effort on our part hopefully helps to reassure DUST that they were working with an industrious and responsible team who want to help support and push the release of their film. We reached out via festival connections and journalists we’d dealt with in the past to see if we could get a few nice words about the film to pass on, and convince people it might be worth 14 minutes of their time.

“One of the best mergers of horror and science fiction we’ve seen for quite some time.” Dread Central

“The best kind of sci-fi…forcing us to see our boring reality with new, enlightened eyes.” Britflicks.com

“Brings the sensibilities of British Realism to the horror realm.” Directors Notes

“I’m still in awe of Deep Clean which undoubtedly stole the show and my heart, I can’t wait to see more of this.” Horrornews.net

“One of the best comedy horror shorts out there - as terrific as it is terrifying.”  Cambridge Film Festival 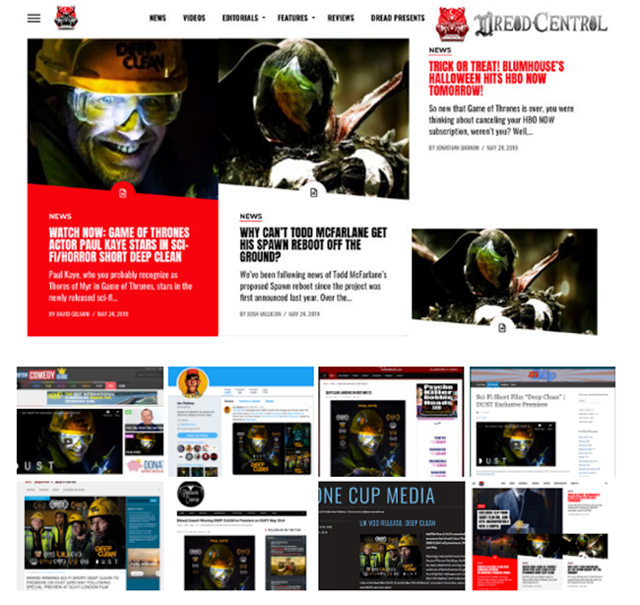 The team is working with our exec producer on 3 genre feature projects at various budget levels, including expanding the Deep Clean world into a feature/TV series, a psychological tech thriller and a folk horror set in the Orkneys.

Deep Clean has been an really important step in our team’s journey by hopefully showcasing to partners and funders our ability to work with a certain level of onscreen talent, crew, visual and special effects collaborators, and that we can take a genre story from idea through packaging, finance, production and then release – in other words, deliver the film.

It feels like a positive time for genre film in the UK, with a lot of very interesting filmmakers currently at large, and our team is really excited about bringing the projects we are now working on to the screen.

Thanks for reading these diaries, I hope they were useful, if it was, do please give me a shout on social, and if you like, you can check out the film below.

Until next time, cheers everyone! 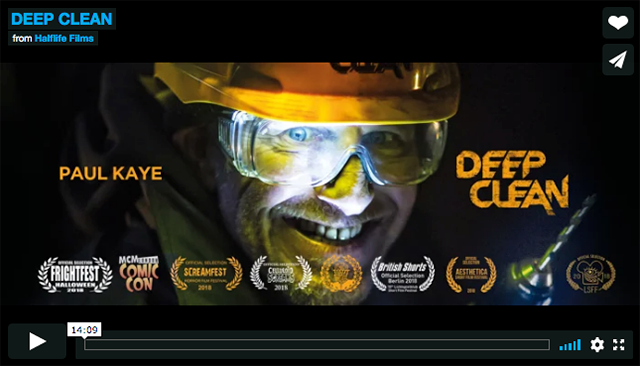 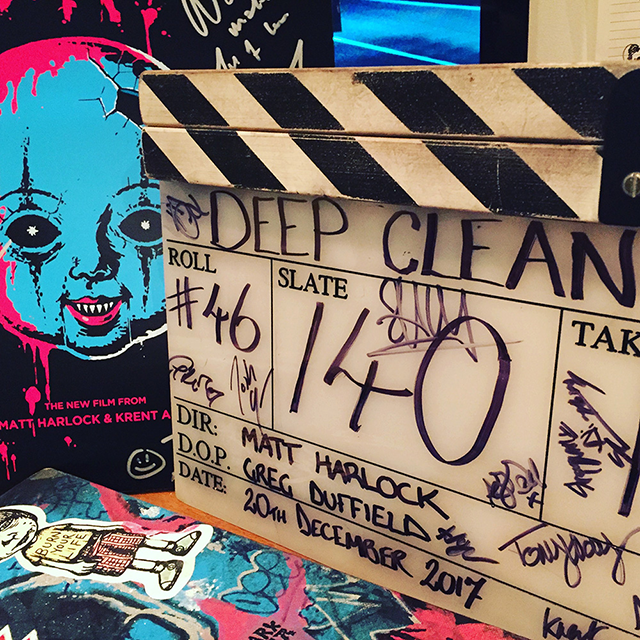