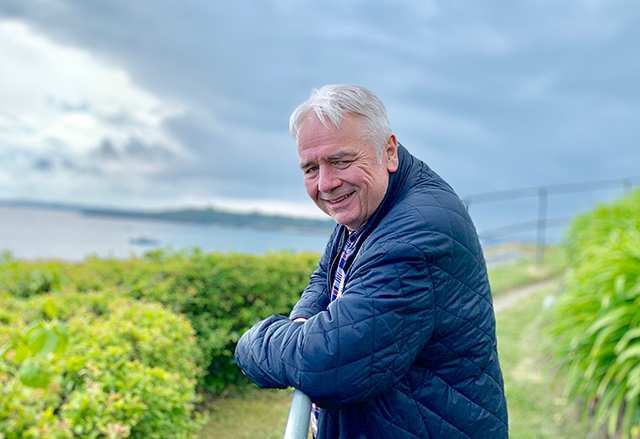 We were deeply saddened to hear of the recent passing of Stuart McDonald, a Directors UK member and esteemed entertainment director, who meant so much to many in the industry.

Below, Tony Grech-Smith reflects on a remarkable career that took Stuart from Blue Peter to the Pyramids of Giza, and pays tribute to a much-missed friend and colleague.

In the past week there have been a number of articles about the very sad and sudden passing of Stuart McDonald, one of the great multi-camera directors of our time.

Perhaps best known for directing Parkinson for a decade in a career spanning over forty years, he was a true entertainment director with credits including That’s Life, Children In Need and Top of the Pops. He was even the voice of Robot Wars. But it’s not Stuart’s impressive list of credits that I want to talk about. Instead, I want to share some of my memories of working with my good friend and mentor.

We met 24 years ago. He was directing The Weekend Show for London Weekend Television, and I had just started out as a junior PA. I remember being nervous to be working with Stuart before I met him. But instead of being intimidating, he was calm, polite, and funny. He never once raised his voice. He never once pointed the finger to blame anyone. It was so refreshing to see, and he inspired me to consider directing myself. As my own career progressed, I was lucky enough to be invited back to work with Stuart on many large-scale entertainment shows over the years and he became a great friend and mentor to me, always on hand to offer advice. I learned a great deal from him.

Stuart absolutely loved making television. He joined the BBC as a trainee around 1978, the golden age of Television Centre and whenever he spoke about his career and those early days, he always spoke about them with such pride and genuine fondness.

He used to regale me with stories about his early days at the BBC. He started out as a junior camera operator and kept his first ever camera card for Are You Being Served. He always laughed that one of his first ever shot descriptions was, “Close Up Mrs. Slocombe, include hat!”

Through the late 70s and early 80s Stuart worked his way up the ranks, becoming a vision mixer before eventually becoming a staff director with the BBC. One of my favourite stories of his was from back when he vision-mixed Blue Peter. They were rehearsing ‘the make’ and the presenter kept dropping the prop and having to duck under the desk to retrieve it. Each time the presenter ducked down, Stuart naturally cut wide, and each time Biddy Baxter would tell him off, saying “No Stuey, we never cut wide on the make”. And so, for the live show when they got to ‘the make’, Stuart cut to the mid-shot and then pushed his chair back and sat on his hands. The presenter predictably dropped the prop and ducked down. Biddy shouted, “We can’t see, we can’t see”, to which Stuart replied, “But Biddy, we never cut wide on the make”. He never vision-mixed Blue Peter again after that.

We worked on a whole range of shows together, from Tomorrow’s World to The Chelsea Flower Show, as well as more exotic shows like the Bollywood Oscars (the IIFAs). They were always enormous spectacles with a cast of hundreds. Through no fault of our own, we often lost days of rehearsal time because the talent frequently failed to turn up. As a result, the shows were largely unrehearsed. One year, there was a section of a performance which always looked a little odd – dancers would suddenly do a strange mime and whenever Stuart asked what was happening, he’d be told it was being ‘worked out’. It wasn’t until we were live and reached this part of the show that we finally found out what they were ‘working out’. An enormous ship suddenly appeared from the wings and made its way across the stage. We’d never seen it and it hadn’t ever been mentioned. Stuart’s shoulders start shaking with laughter as he took his glasses off, and said, “cut wide and let’s enjoy the spectacle!”

That was one of the great things about Stuart – he never panicked and was never fazed. He took everything in his stride with a calm, considered approach which made him a joy to work with.

One year, we flew to Egypt to broadcast a live two-hour special for National Geographic where we filmed the unlocking of a secret chamber in the Great Pyramid in Giza. It was a once in a lifetime opportunity. To be live for prime time in LA, we went on air at 3am local time. Stuart, Ian Trill (who was vision mixing at the time) and I were crammed together in a tiny truck held together with bits of tape in the sweltering heat, with the truck door open for ventilation. It was uncomfortable and a complicated show, but it was one of those career-defining moments when you know you are sharing something truly special with the world.

One of Stuart’s favourite gigs was Children In Need, which he loved. He was always excited to have a live orchestra on any show and one of his favourite directions to give every year as the fundraising total was announced was without doubt, “cue timps!”  He also loved a “rumbustious round of applause!”

As I think back over our friendship and our career together, a resounding memory for me is that of laughter. Stuart loved to laugh. He would often say something just to get a rise from me, and when I did eventually take the bait, he’d just cry “cheeky!” and burst out laughing.

On a personal note, I also became great friends with Stuart’s partner Paul and in 2011, I had the honour of being their best man at their wedding in Boston, Massachusetts. They’d chosen Massachusetts because at the time it was the only place a wedding between two men could take place before God, which was important to them both. Stuart and Paul celebrated their ten-year wedding anniversary just days before Stuart died.

In recent years Stuart had suffered some health problems and he’d been taking time out from directing. But his love for the job meant that he wasn’t ready to retire, and I know he was ever hopeful that his health would improve and he would sit in the director’s chair once more.

Stuart was without doubt one of the kindest, most generous, well mannered, funny, gentlemen I’ve ever had the pleasure and privilege to know and to call my friend. I learned so much from him over the years. His encouragement and mentoring steered me to becoming the director I am today.

Stuart McDonald passed away at the age of 64, and is survived by his partner Paul. Our thoughts go out to his friends and family at this time.

Directors UK Disability Working Group: Ask Us Anything – what we learned

Industry unites to put sustainability firmly on the agenda