Last month, Directors UK and representatives from authors’ organisations from across Europe converged on Strasbourg to take part in a day of lobbying activity on copyright reforms at the European Parliament.

Director and Board Vice-Chair Tom Roberts, who was part of the Directors UK delegation, tells us more:

Late last month I accompanied Directors UK CEO Andrew Chowns and Head of Communications and Public Affairs, Victoria Morris on an intense but very productive trip to lobby British MEPs at the European Parliament. We were there to urge them to adopt important amendments to the EU draft directive on the Digital Single Market. 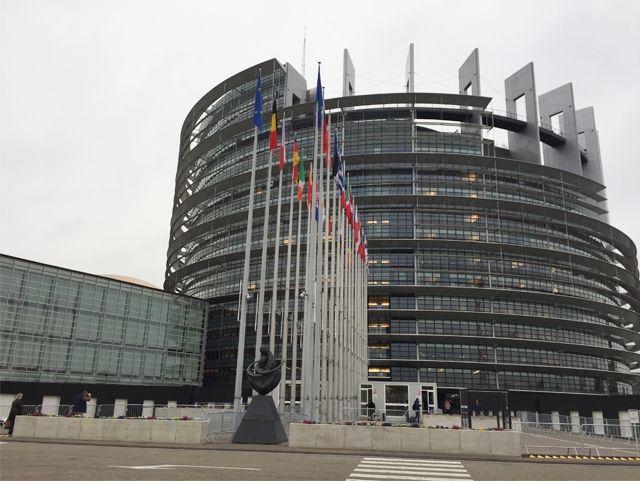 Lobbying Strasbourg may seem an antiquated notion in the these Brexit days but the reality is otherwise. With over two years to go before we exit and a promise by the UK Government to absorb (temporarily at least) all European law into the UK statute book, it makes sense to do all we can to insure the new directive will truly serve directors’ interests. We are seeking a provision in the directive that establishes an absolute and inalienable right to remuneration for the use of our copyright. We also want them to toughen up provisions on producers reporting sales and revenues, and make the end-user fully responsible for compliance.

Pretty arcane stuff, I imagined when I accepted the assignment. That idea evaporated the moment we arrived. The British MEPs we met were entirely engaged in the process, and keen to hear directly from working directors. They had already been lobbied by producers and had heard from the music industry, so meeting directors with knowledge of the coalface was a new departure. They seemed genuinely sympathetic and recognised how much more of an economic contribution creative workers can make if they are finally given a reasonable share in the exploitation of our work.

It is hard to judge, at this point at least, whether the amendments will ultimately be adopted, but as our partners in Europe, FERA and SAA, along with our UK colleagues at ALCS, are gearing up for the fight we can reasonably expect some success.

Now if we can just get the Directive on the statute book before we leave...

As part of an initiative organised by our European association SAA (Society of Audiovisual Authors), representatives from each EU member state met with their MEPs on Tuesday 22 November to highlight the issues affecting authors within the proposed changes to the European Copyright Act. Representatives and MEPs also attended a dinner to celebrate the nominees for the 2016 LUX Prize which was taking place that week.

You may be wondering why this trip was important given the UK’s decision to leave the European Union and the forthcoming ‘Brexit’. There are significant changes being proposed to European copyright legislation in order to make it fit for the digital age. Much of what is being proposed is a step in the right direction following years of lobbying for fair remuneration for authors – and copyright is the key here. The new copyright directive acknowledges the importance of this and has included provisions within the draft which should, in theory, enable authors to receive fair remuneration, including: transparency obligations for reporting; a contract adjustment mechanism if your agreed remuneration is disproportionately low compared to the revenues gained from your work; a dispute resolution mechanism should you feel your have not been fairly remunerated. However, in practice we believe that the drafting of the directive needs to be strengthened in order for these provisions to be effective and remove any loopholes. We are also calling for the inclusion of an unwaivable right to remuneration.

Lobbying in Europe to get this right is still important because if the directive is passed in Europe before we leave the EU then it is likely to become law in the UK too, and we think that this is good news for you as authors. That is why we’re pushing hard for them to get it right at this stage.

Directors UK was represented in Strasbourg by myself, Andrew Chowns, and Tom Roberts, an award-winning documentary director and Vice-Chair of the Board. We were joined by Barbara Hayes (Deputy CEO) and children’s author Diane Redmond from ALCS, representing writers. Together, on behalf of directors and writers, we had meetings with seven UK MEPs who are actively working on debating copyright in Europe, setting out our concerns and suggesting amendments. We found most to be supportive of authors and receptive to what we were saying, some clearly sympathetic and willing to support our changes, others asking questions which will help to shape our on-going activity. Having authors in the room with us to give first hand examples of what you do and the difficulties of achieving fair remuneration was powerful. Case studies, case studies, case studies and well-thought-through arguments are what will help MEPs to argue our case effectively.