Published on: 28 March 2019 in Career Development

As part of the programme, Laura was selected as a placement director on Sky One’s brand-new dystopian street racing series, Curfew — starring Sean Bean and Miranda Richardson. Working alongside director Colm McCarthy, Laura directed second unit and had access to all levels of production as part of the scheme.

We talked to Laura about capturing car-chases, depicting dystopia, and drowning a street in blood. Read our interview below. 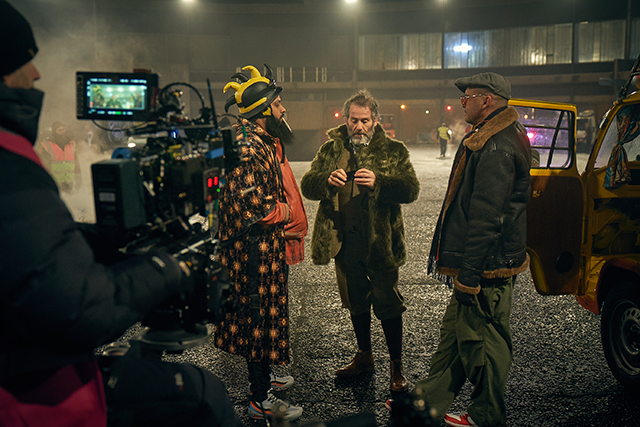 Curfew is a brand-new series and I was placement director on the opening block alongside lead director Colm McCarthy. Colm was creating every aspect of the series from scratch: casting, choosing HODs, developing the visual style (including designing the world), choosing the cameras and lenses, planning the stunts, CGI and creating the movement and look of the Creatures. I learned new techniques — like pre-vis — that are available to plan at this budget level and that sometimes the old ones, such as a bunch of toy cars and a paper road, work just as well!

How was your first day on set?

I directed second unit and the first day was the post-titles montage in Episode 1, in which we show London waking up after the night’s curfew. I had the unit for a half day prior to the night’s action unit shoot (with action unit director Mark Mottram) and we had several locations, so finding places close to each other and the action unit was essential to minimise time lost to unit moves. We were also shooting Liverpool for London so finding the right looking locations reduced what was available. We didn’t close streets so we tried to shoot outside of rush hour, in controllable areas where we would be relatively inconspicuous — although once we’d drowned a street in fake blood (which made the local paper) all hopes of being inconspicuous went out the window.

Curfew takes its name from the fictional curfew imposed by the government in the show. What steps did you take to represent this world on screen?

The montage sequences were about showing recognisable London images: businesses opening/ closing, morning/evening commuters etc., set against the shuttered world of London under curfew.  The shuttering became one of our biggest considerations and, like the main unit, we used a mix of real shutters with the addition of chalk graffiti, dressed-in shutters (ours were additionally adapted to be fitted and removed in a much shorter space of time than on main unit, and attached in ways that didn’t involve drilling into any of the buildings), and CGI. We also had the curfew boxes with VFX graphics added in post and Tannoys, both designed to emulate pre-existing street furniture. Camera movement, extras, costume and make-up also had to be considered to ensure everything fitted with the ambitious style of the series. 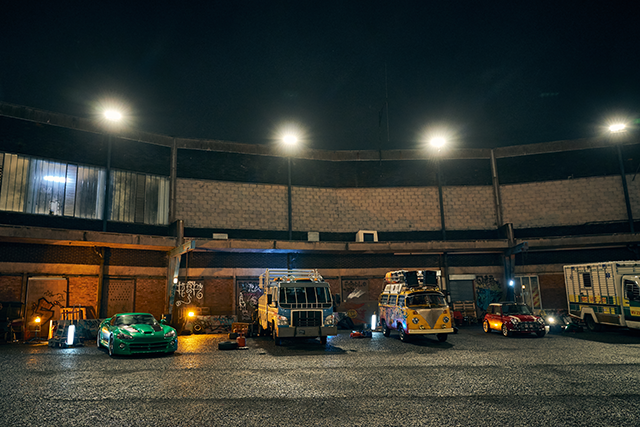 Curfew has a great ensemble cast. What was it like seeing that come together?

Being placement director meant I was in some of the auditions, and also in the casting meetings where ideas were brainstormed and strategies discussed for bringing new audiences via casting and approaching high-profile cast. There were some great surprises — in one case several lower profile cast turned down a role which was then taken, at the last minute, by someone with a much higher profile.

I also loved watching the cast work on set: Billy Zane, Guz Khan and Jason Thorpe developing Team Awesome’s friendship through an improvised game of cricket whilst technical preparations went on around them; Andi Osho, Ike Bennett and Jessye Romeo discussing their wants and stakes in between takes; Sean Bean hovering quietly behind a hedge before delivering an incredible reaction to a loved one’s death for his very first take, on his first day on set.

Car chases and Creatures are a huge part of Curfew. Did you learn anything new regarding the implementation of stunts and SFX?

Sky were marketing Curfew as a road-race drama so the pressure to deliver on the stunts was huge. The planning meetings involved all HODs to make sure the human story was told, the genre beats (including action and comedy) were hit and everything was done safely, within budget and considering the input and needs of all departments. Finding controllable locations with amenable local councils (turns out some are more up for car chases than others!) brought additional pressures, as did shooting at night and the arrival of the infamous “Beast from the East”. Thankfully the team were brilliant — action unit director Mark Mottram had worked on everything from James Bond to Harry Potter, and the stunt drivers included Ben “The Stig” Collins and thanks to location manager Miglet Crichton we became the first unit in history to close the Mancunian Way. 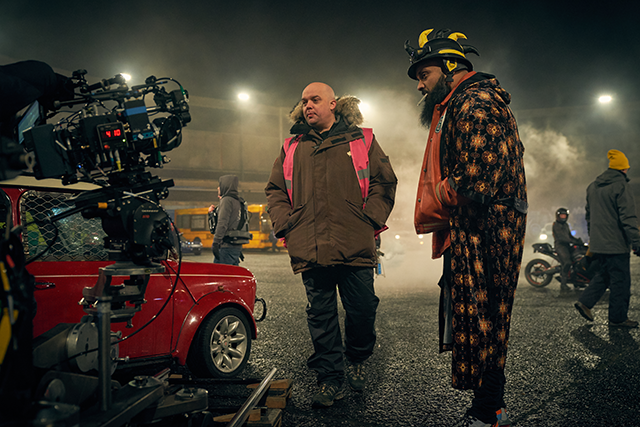 Watching the CGI stunts develop was hugely informative, as was the creation of the driving scenes. In the world of Curfew there are no streetlights, buildings are shuttered and there are curfew boxes on every corner, so the streets the characters drive through had to have streetlights painted out, CGI shuttering and curfew boxes added, then combined with the footage of the car interiors using green screen, back projection and Poor Man’s Process.

The Creatures were dancers, chosen for their ability to move in unusual ways, and I got to direct one eating a teenager in a dingy alleyway, made dingier by our set dressing. The Creature suits are time consuming to apply and very fragile, especially around the mouth. This, along with the onset of rain and being next door to a lively pub, brought its own set of considerations.

Realising I thought we’d got the shot, then wondering if Colm would agree. Directing second unit is about fitting in with the main unit director’s vision. 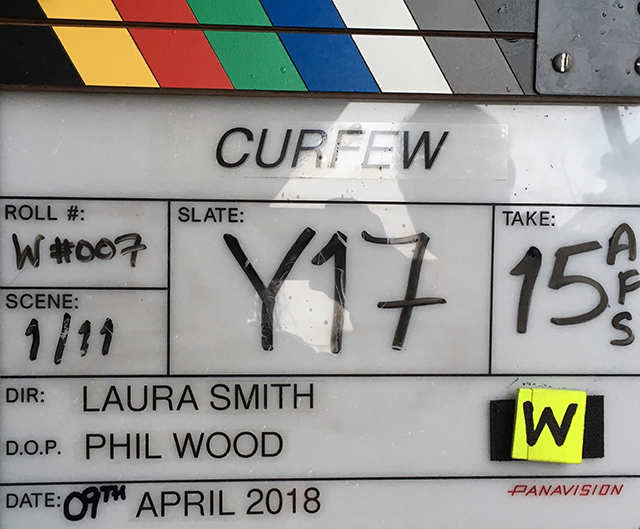 I had access to every aspect of the process and the variety was fantastic. Meetings with commissioners, casting a range of actors from Hollywood names to newcomers, car stunts, developing the movement and costumes for the creatures, back projection and green screen, SFX, 3D and 2D VFX and post-production. The relationship between director Colm McCarthy and producer Simon Maloney was inspirational, as were the other HODs including DoP Suzie Lavelle, production designer Tom Sayer, VFX supervisor Steve Street and 1st AD Steve Robinson.

Directing the second unit montage sequences and pick-ups including blue-screen, animals and prosthetics was brilliant creatively and technically and it was hugely satisfying to be part of the team bringing this fantastic series to life.

I’m directing Casualty on the BBC Continuing Drama Director’s scheme, also supported by Directors UK — I’ll shadow one episode and direct the next. We’ve just got development finance from the BFI for a feature that I’m directing, and I’m writing and directing another feature which was 1 of 12 international projects selected by the Cannes Film Festival/ Frontières Co-Production Market — which previously developed the multi award-winning horror, Raw.

Curfew is showing on Sky One, Fridays at 9pm. The perfect way to keep off the streets after dark.

Hi there, I’m an animation Director with skills in story animation and boarding for both Live action movies as well as animated films. I would love the idea of working along side or under a Senior seasoned live action director in order to get a chance of having a chance of working more on live action behind the scenes. I feel my overall experience in handling pre-production and story development could be an asset. If there’s a possible fit on a production particularly one that may have VFX and creatures would be of a great interest.

Directors UK Inspire: shadowing on the set of Outlander