F-Rated: an interview with Holly Tarquini

Earlier this month F-Rated, who supported our own campaigning for gender equality, listed Directors UK as an ‘F-Rated ally.’ But how does the F-Rating work, and what can directors do to help? We asked its creator, Holly Tarquini.

What is the rating and how does it work?

The F-Rating is a rating for films which are: Directed by women and/or written by women and/or starring significant women on screen in their own right. I developed the rating in 2014 at Bath Film Festival to shine a light on the great work women are doing on screen and behind the camera.

The rating is applied to films by cinemas and film festivals, giving movie-goers an easily identifiable label so they can choose films that fairly represent women on screen and behind the camera. Highlighting these films sends a clear message to distributors, producers and funders that women can and should have more than just a supporting role within the industry.

How did this project come about?

“I wanted to do something positive to amplify the work which is being done by women, to change the narrative that a ‘director’ is a middle-aged, middle-class white man in a baseball cap”

The rating was inspired by the dire statistics about who is telling the stories we see on our screens. I wanted to do something positive to amplify the work which is being done by women, to change the narrative that a “director” is a middle-aged, middle-class white man in a baseball cap.

What have been the main challenges in getting this project off the ground?

The rating has had an enormous amount of support from the press, the industry and audiences – truth be told, it’s been pretty overwhelming. Having said that, the F-Rating has never had any funding and wasn’t conceived as a money-making venture which is morally great but difficult in practice. We are currently looking for funding to employ an F-Rating Assistant part time through the year. 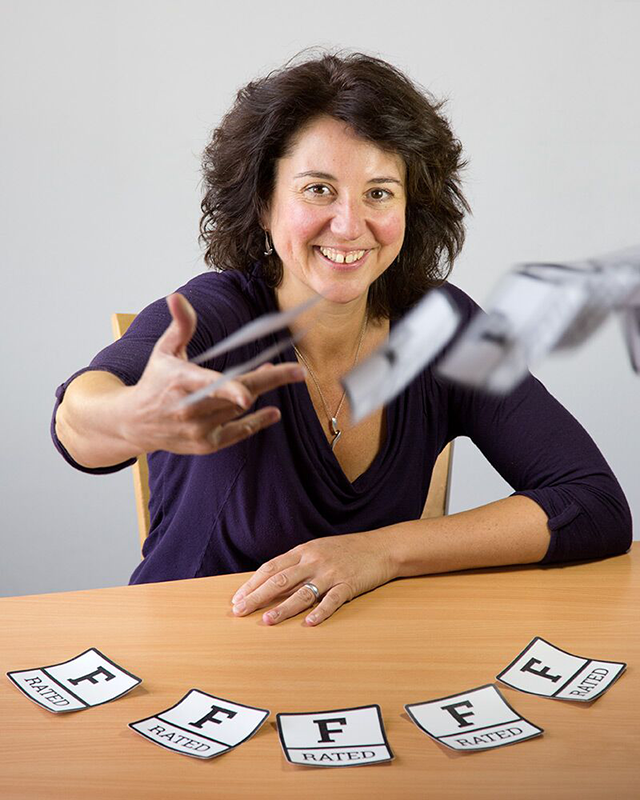 IMDb recently announced that they are using the F-rating – where are you hoping it goes next?

I am looking forward to distributors and cinema chains adopting the rating. It’s such a simple, positive way of highlighting films by and about women and like the Fair Trade stamp gives audiences the option of proactively supporting these films.

What can Directors UK members do to get involved with the campaign, and what more would you like to see from directors within the industry in general?

There are lots of ways people can support the F-rating.

You can add the F-Rated keyword on IMDb to films which are directed by women and have screenplays written by women (here’s how.) If you’re on social media, follow and share F-Rated on Facebook and Twitter. Or you can send cash to [email protected]!

As regards the industry, we all need to proactively support those whose voices are not heard as much in TV and film: women, people of colour, the LGBT community, working class and disabled people. I used to be a TV director/producer and it shames me looking back that I simply recruited in my own image: privileged, tertiary educated white women. Now that I have explored and examined my own unconscious bias I understand that this is how we all behave naturally, but I wish I had known more and reached out further.

“Directors in the industry can help change who tells the stories we see on screen...by selecting diverse crews and proactively mentoring those with least privilege”

Directors in the industry can help change who tells the stories we see on screen (and therefore who those stories are about) by selecting diverse crews and proactively mentoring those with least privilege, and (when they are able to) by choosing scripts written by people who are badly represented on screen.

Everyone can support the F-Rating and become advocates of an inclusive industry. All evidence shows that on screen stories have a huge influence on audiences, that effectively “if she can see it she can be it.” In short, it may be possible to change our culture by changing the stories we see in TV and film. There is also mounting evidence that the greater the equality in society, the happier the people — incentive for everyone.

Visit F-Rated to find out more about the rating, and follow F-Rated on Twitter. For information about our work on gender equality in UK TV and Film production, visit our campaigns page.

F-Rated: an interview with Holly Tarquini

A step towards fairness: negotiators reach an agreement on the new EU Copyright Directive