Directors UK Member Paul Andrew Williams has had a bountiful, award-winning career across both film and television — but through it all, he has contended with mental health issues that have turned shoots into a struggle with his own emotions and thoughts.

Below, Paul opens up about how his experiences with mental health manifested themselves on set, how he learned to recognise how widespread these issues are in the industry, and — most importantly — how he learned to stop hiding it and become an open book. 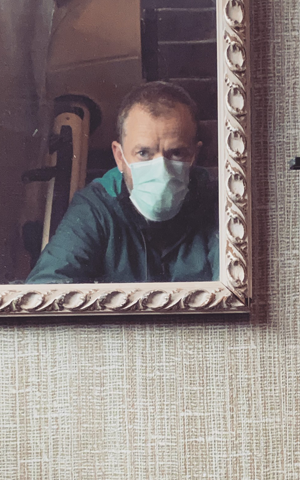 The Aldwych Theatre, where my mate had let us have a production office for free. Upstairs, every member of the crew was waiting to start the production meeting. Downstairs, I was a blubbering wreck being told by the producer that I wasn’t mad, that I wasn’t going to be taken from the production meeting in a white van, that the people up there giving their time and equipment for free were there because of me, and they wanted to help make my first film: London To Brighton.

It took some convincing, some time to let my face return to it’s ‘I haven’t been crying’ state. But I went upstairs, had the meeting and prepared for the first day of shooting London To Brighton.

I would realise — and this has been the case for my entire career — that no one ever really noticed just how often I was angst-ridden. Everyone thought me confident, funny (and extremely good looking of course!) on the set…which baffled me. But I understand it now, because a lot of people dealing with insecurity and anxiety in the work place hide it extremely well.

Obviously that film did extremely well and opened many doors for me. But rather than reduce the stress and fear I had, it just gave me a massive dose of imposter syndrome. I couldn’t understand why people thought I had any ability, despite being lauded around town by agents, critics, and movie peeps. I started working on my next feature film and was actually getting paid, but I still had the same anxieties, nervousness and fear that the film would be stopped because I would be sectioned. I remember specifically after the first night of shooting on The Cottage, walking around a small village in the Isle of Man on the phone to my agent begging him to get me off the film because I couldn’t sleep. I felt like I would never sleep, and it’s impossible to direct something after being awake for 48 hours….. He calmed me down, and I slept. I had other issues during the shoot, but I found out afterwards that so did many of the people involved. You start to realise that not everybody else on the shoot is the pillar of wellness and confidence either. Other people don’t sleep, other people have mini-meltdowns. Mine were all in private, but that’s not the case for everyone.

But hang on a minute herr director, you can’t relax! You’re the leader, you’re the one with all the answers to everyone’s questions, you have to know everything. So more pressure and more pressure piles on, and suddenly you don’t know everything, and that turns into knowing nothing and thinking you’re wrong and appearing stupid to all the clever crew members. When this happened to me I again began to think I’d be sectioned — but focus, focus Paul, tell them where to point the camera tell the actors where to run to, make people laugh, expel energy relentlessly and then no one will know that you have no idea what you’re doing. Wow. One’s brain can really go into overdrive with this pressure thingy. That’s mental health for you.

Throughout all this, no one really thought I was anything other than a nice, funny, competent director. Only my agent, my girlfriend and one of the producers knew I was suffering. Finally, in the edit, I could no longer hide my struggle with my brain and emotions. I became a tearful mess, with no idea how to get better. I finally succumbed to the fact that I actually and genuinely had a problem with my mental health. I had already been in therapy, but a great GP persuaded me to start taking medication. Persuaded me because — and I hear this from a lot of “creative” people — I thought my fabulous and unique creative spark would be dulled to grey shit. I thought I would never have an idea again. Obviously I couldn’t continue the way I was going, because I would cry for hours without knowing why. So I did take medication, and I still take it, and I will probably continue to do so. I still have the odd great idea, I still have meltdowns, and my life is certainly not grey dull shit.

Over the many jobs I’ve had, and the life I’ve lived since becoming aware of my mental health, the most important change for me was to stop hiding it. I am a very open book. I will happily not know something now, and freely discuss my fears and anxiety with whoever asks me. I will happily acknowledge that I am equal parts strong and weak. I have achieved a bit of success in my career (I judge success on the fact that I have had jobs, and not red carpets), and I have spoken to many a person in this industry, and pretty much everyone has a little bit of mental health stuff going on. The minute one feels like they aren’t the only wreck on the seabed, it becomes freeing. You can accept the things you cannot change, and work on the things you can. The moment we can all feel more comfortable with our own fragility, the better we will all be, working with the super, eclectic, clever, slow, fast, multi-aged, multiracial and gender-inclusive cast and crew that we should all be lucky enough to be working with.

Paul Andrew Williams is taking part in Movember to raise awareness for mental health issues. You can donate to Paul here.

If you’ve been affected by any of the above, here are resources to help you:

Legal help with your contract and employment conditions

Six tips to stay sane in an insane business