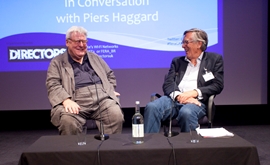 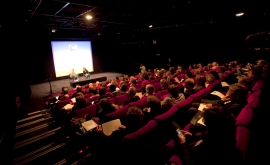 Delegates from all across Europe flocked to London for the FERA conference last weekend, an event hosted by Directors UK and featuring numerous expert speakers from all over the globe.

The Assembly, which occurs annually, traverses the continent each year so as to allow member organisations the opportunity to play host to this prestigious event; this year, for the first time, it was the turn of Great Britain.

With the weekend reserved for internal discussions between the various European unions and guilds, Friday was free for more wide-ranging debate about the craft of directing and the state of our audiovisual industries. Taking place at the BFI Southbank, invited delegates and Directors UK members were greeted to the conference by our CEO Andrew Chowns, before a quick introduction from recently-appointed FERA Honorary President Sir Alan Parker (of whom more later) for the first speaker of the day: Ted Hope.

Ted’s credentials in the industry are well-documented. The producer of numerous Academy-nominated pictures including 21 Grams, The Savages and In the Bedroom, Ted is also one of the most respected and opinionated voices working in independent Hollywood. Ted’s keynote speech, entitled Say Goodbye to Bizarro World: Time to Make Business of Art, which criticised the brand-obsessed studio system and impored filmmakers to start to take ownership of their content, can be read in full here. After delivering his address, and taking questions from moderator Cath le Couteur and the audience (many of which are 'Storified' here), the session came to a close.

Proceeding it was a lively and spirited panel session exploring film distribution in the digital age, chaired by Danish director Annetee K Olesen (Borgen) and featuring Michel Ferry (ARP Board member, director/producer), Lizzie Gillett (producer, Age of Stupid), Andy Green (COO/Co-founder, Distrify) and Philip Knatchbull (CEO, Curzon / Artificial Eye). Annette began proceedings by lamenting the abolition of certain levies in her native Denmark, which she believes has created a more risk-averse industry, and with a tendency to produce only those scripts that look commercially successful. The discussion then turned to the power and influence of Netflix, and the inspiring influence of the internet on directors. There is great potential for the empowerment of filmmakers through using the resources available through the web, but how much responsibility should creatives be assuming? And does it really make a difference?

This was the crux of much of the debate that occurred in the session, with Philip Knatchbull vehemently opposed to the idea of directors as distributors: their focus should be on making films, he argued, and they should leave the promotion side of things to the experts. He was however quick to concede that the current model for independent cinema was “broken”, and that his own efforts and that of Curzon cinemas to improve things have been met with hostility and bureaucracy. Despite that, Philip described himself as “optimistic” for the future of distribution and exhibition thanks to the continued advances made in technology.

Lizzie Gillett proffered an opposing view to Philip’s, pointing to her own experiences of marketing The Age of Stupid as proof that filmmakers can be successful at finding their own audiences. Thanks to the innovative approach adopted by Lizzie and director Franny Armstrong – including the world’s “greenest” world premiere and the development of software that allowed individuals and organisations to host and profit from their own screenings of the film – The Age of Stupid became a global success, making half a million dollars and garnering column inches in publications everywhere.

Andy Green’s own software creation has arguably proven even more groundbreaking. Operating as an online platform through which filmmakers can embed and monetise their own content, Distrify has quickly established itself as one of the pioneers in the digital distribution revolution. Aside from providing the means to earn revenue for directors, the software also assists in finding an audience for a film through its use of user-tracking and community features. Andy shared a story of how Distrify had helped an Indian filmmaker secure an audience through a teaser trailer, then sold distribution rights to around 100 of those fans, generating enough income that he could then go ahead and make the full feature. It has gone on to become the most successful independently-produced movie in Indian cinema, Andy told the audience.

Michel Ferry also took umbrage with the current distribution model, focusing on the situation in his native France and the failings of its cinemas. Describing the French system as “outdated” and its proponents as "lazy", Michel was pessimistic about the future for distribution in its current guise. Innovations such as day-and-date releases are illegal in France, and multiplexes are far more interested in popcorn sales than they are in the movies they screen, he said.

Though there was disagreement over some issues, when asked by an audience member whether there was scope for a European version of Netflix, the panel seemed unanimous in their ambivalence to such a concept, with Philip Knatchbull in particular promoting the importance and value of maintaining “regionality” here before the session's end.

After a brief refreshment break, delegates and guest reconvened for the final session of the day: FERA Chair Piers Haggard in dialogue with its President Sir Alan Parker. Beginning with a ten-minute trail that featured some of the highlights from Alan’s long and triumphant career, Piers’ questioning generated numerous candid, insightful and often hilarious anecdotes from Alan on his experiences as a filmmaker. From the “dyslexic” death threats in Argentina to a dancefloor altercation with a certain Hollywood director, an hour in Alan’s company ensured a most enjoyable ending to a stimulating and thought-provoking day.

The conference also provided a memorable end to Piers Haggard’s tenure, who, having served as Chair for 3 years, stepped down this month. Having stood on the Executive Committee since 2008 and been involved with FERA since 1982, his contribution to the European directing community has been immeasurable. Dan Clifton, a fellow Directors UK Board member, was elected to the new Executive Committee at the Assembly; our congratulations to him. 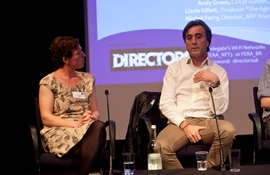 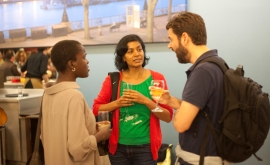 My Margate Workshop: Deborah Paige on the DCF ‘Directors in Schools’ scheme