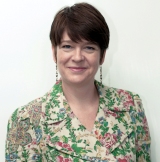 Alison Small has been announced as the new Chief Executive of The Production Guild, starting from mid-September 2012.

Alison, pictured right, is currently the Director of the Creative Skillset Craft and Technical Skills Academy. She is also serving as the Chair of Women in Film and Television.

Commenting on her appointment, Alison said,

“I’m delighted to be taking up this opportunity of becoming the CEO of The Production Guild. I look forward to developing the work with the board and the membership and plan to ensure that the members remain internationally recognised as world class, and that PG continues to be recognised as a highly effective organisation that represents the senior production and accounts personnel in the UK film and TV industry, and an authoritative voice on film production in the UK.”

For more on this story, please visit http://www.productionguild.com/news/current-news