Our report reveals the shocking statistic that only 1.5% of UK television is made by a BAME director.

We found that BAME directors are not only critically under-represented and under-employed in UK television as a whole, but that they are being given a far smaller proportion of directing opportunities in many key programming genres. Some of the most popular drama, comedy and entertainment shows had never been directed by a director who is of black, Asian or minority ethnic background - including all programmes within our sample from the following genres: period drama, chat show, game show, performance, reality, panel show, sketch comedy, and children’s comedy and entertainment.

Why is this important? Because it’s a director’s job to reflect our society back to us, and if the people making television don’t accurately resemble the audience watching at home, then that reflection will be skewed. Viewers are being offered cultural and social influences that come from an increasingly narrow pool, affecting our understanding of those around us and leaving out other important voices and perspectives. There are few roles within television production where it could be more important to ensure that the diversity of the audience is truly reflected and fairly represented.

Without urgent, targeted action our research indicates there is a real danger that UK television production could effectively shut out the voice of BAME directors altogether.

Our research is based on a large sample of the most popular and significant programmes made in-house at the BBC and ITV, and by the top nine consolidated independent production companies: All3Media, Endemol, Shine, Fremantle, Zodiak, NBCU, Shed, Tinopolis and Boom.

We analysed over 55,000 individual episodes across 546 programme titles, looking at programmes broadcast up to the end of 2013 (details of our methodology and the programmes included in the sample are available in the full report). 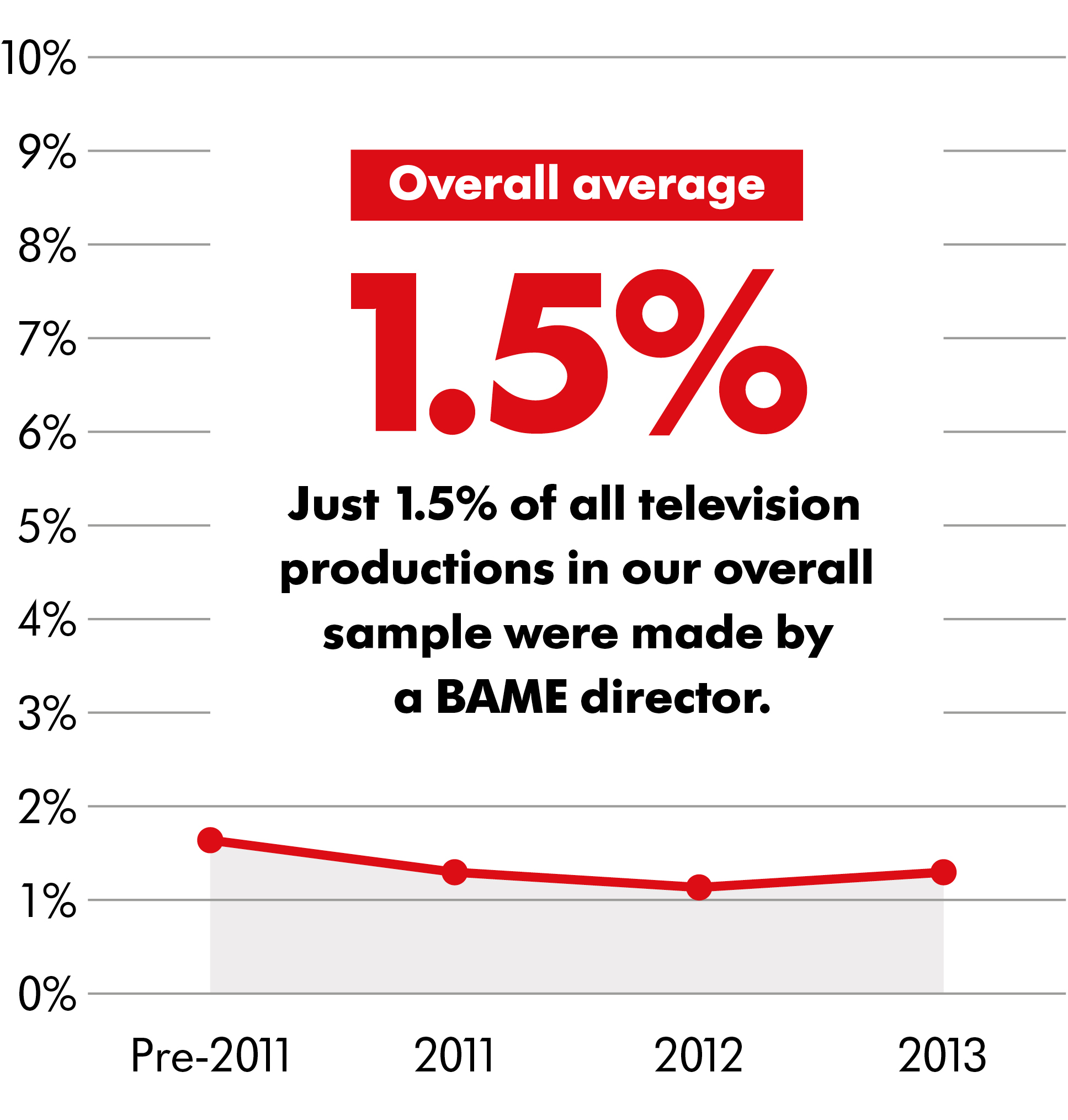 Even without looking at employment figures, BAME directors are already critically under-represented in UK television: making up just 3.5% of the directing workforce (based on Directors UK membership). This compares to the 11% of BAME workers within the wider creative industries, and the fact that individuals from BAME backgrounds make up 14% of the general population. 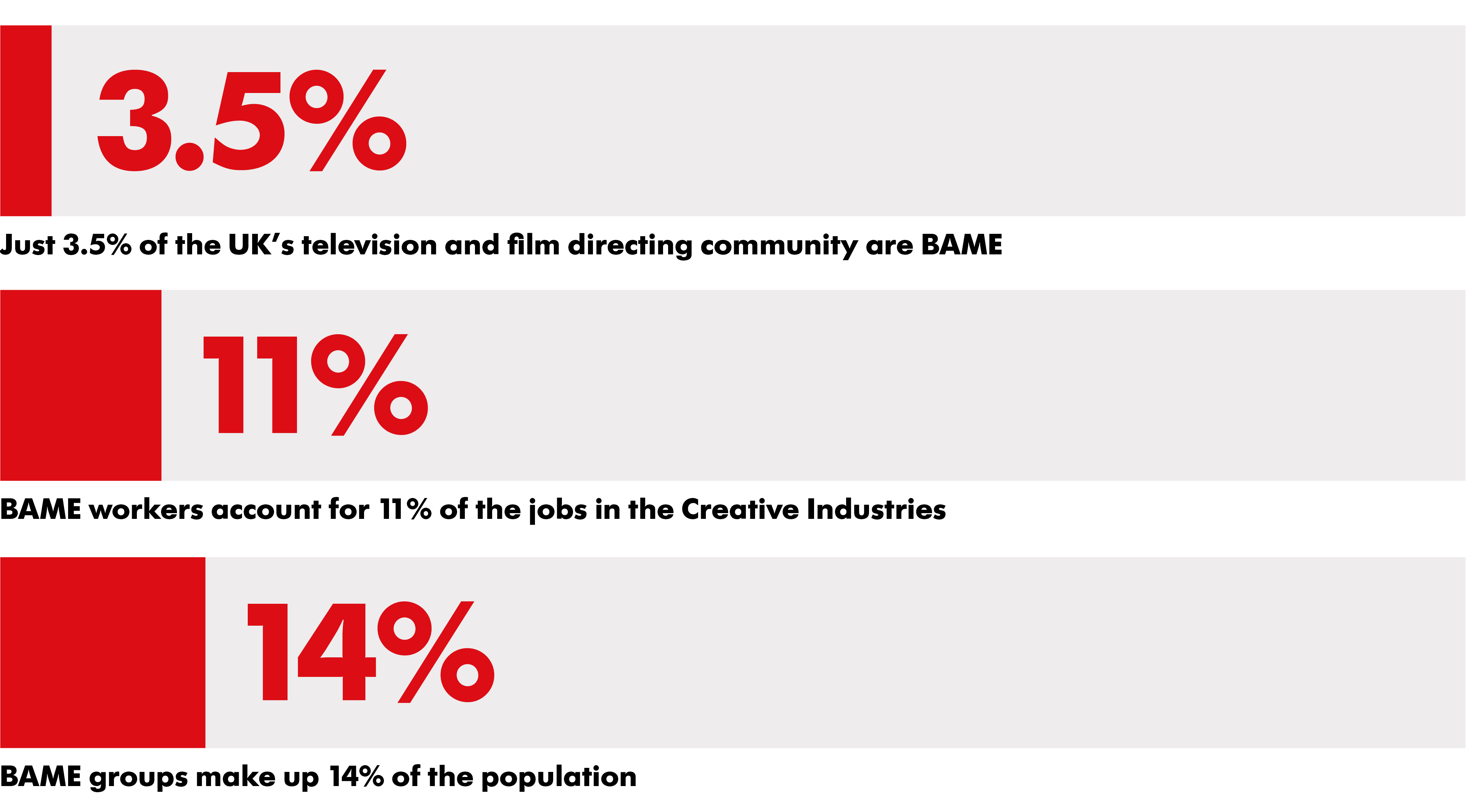 The proportion of programmes made by BAME directors is alarmingly low across all genres in our sample, with no pockets of strength we can highlight. 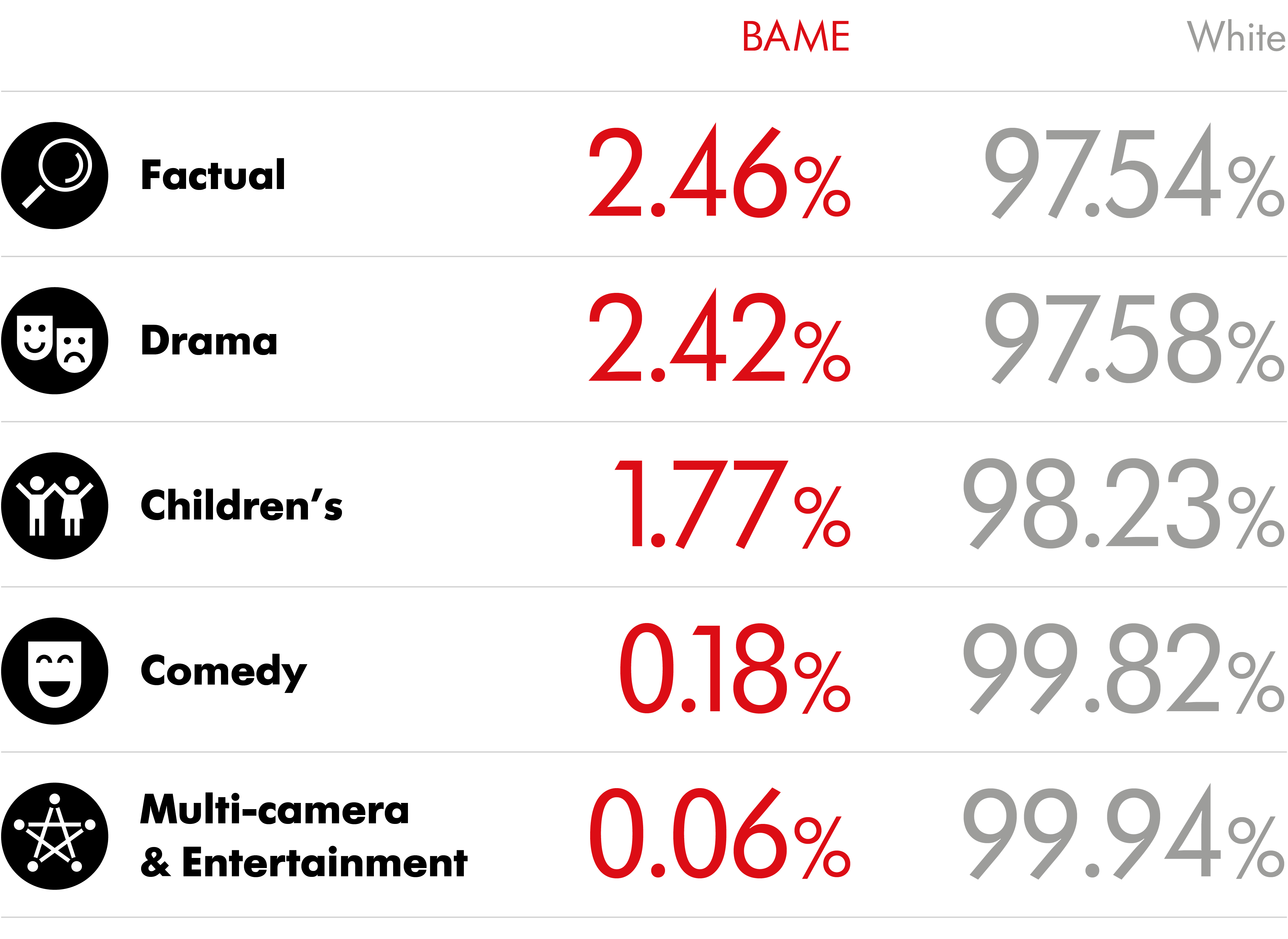 Further analysis at sub-genre level revealed there are a number of areas where no episodes at all had been made by BAME directors. 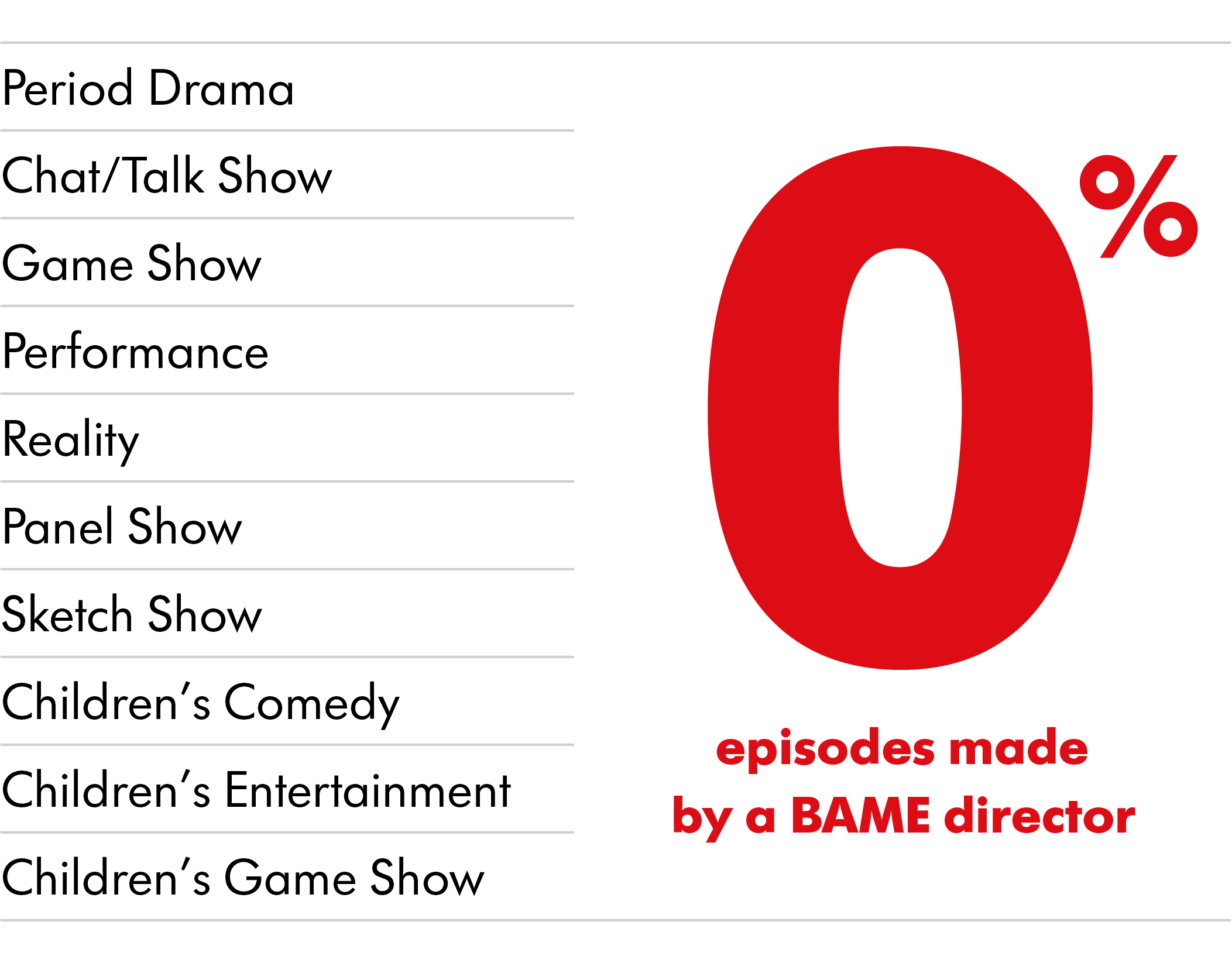 Menhaj Huda, Diversity Chair at Directors UK, said: “Our report findings are both shocking and concerning. It reveals what many of us in the industry have been aware of for some time, but now we have hard evidence to show just how serious the lack of diversity in television really is for directors. Sustaining a career for any director is difficult enough as it is, but when the perception of BAME directors is that they are less able, less experienced and less competent, then it becomes virtually impossible, regardless of talent. Our report shows that getting work in television is inaccessible for far too many and there is a failure to provide any kind of support for BAME talent”.

Huda, who has directed a feature film (KiDULTHOOD) as well as a range of popular British television programmes, such as Queer As Folk, By Any Means, EastEnders, The Bill, Emmerdale and Coronation Street, continued, “We are talking about British directors from BAME backgrounds whose experiences growing up in this country offer a different take on story-telling, a different perspective, but a voice that is valid which is effectively being shut out. It’s great that the industry is talking about the issue of diversity but discussion does not equal action. Until the process of selecting and hiring directors becomes more transparent and accountable, we will not achieve the improvements we all want to see”.

Andrew Chowns, CEO of Directors UK, said: “Our report provides a real insight into the situation facing BAME directors with recommendations of what needs to be done to address the lack of diversity. Everyone, at every level across all genres, has a significant role to play to ensure that all directors have equal opportunities. We have set out a number of practical steps that can be taken to make a real difference, from improving recruitment practices to providing on-the-job training and mentoring opportunities. We see this as something that Directors UK needs to take a lead on, which is why we are already involved in training projects and other initiatives with industry partners. Our report reaffirms the need for broadcasters, as industry leaders, to work together with us and the wider industry to create new opportunities for progression and change”.

We spoke to several directors from BAME backgrounds about their experiences in the industry, their response to our findings, and about what needs to be done to improve opportunities for directors like them. Read what they had to say in this separate article.

Directors UK has set out a number of recommendations to help increase the employment opportunities for BAME directors in UK television production including:

Read the full report to see details of all our recommendations.

With many industry organisations taking action to address the under-representation of BAME talent both on and off-screen, Directors UK will work with broadcasters, production companies, agents and training providers to bring about a significant increase in the number of television programmes being made by BAME directors across all genres.

`It's hard to argue with these figures....it is not our imagination! Under-representation in all areas of programme-making and in all genres is severe!