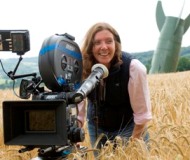 Susanna White, acclaimed director of Generation Kill, Bleak House and Boardwalk Empire, recently met with EC Vice President Nellie Kroes to put forward the case for creatives in the debate over fair rights and reward in the audiovisual sector. She wrote her account of the meeting for us here.

"I just travelled to Brussels, on behalf of DUK, to put the case of UK Directors creative and financial rights in the digital environment to the Vice President of the European Commission. This meeting was the result of a long term lobbying campaign by the Society of Audiovisual Authors and it was a substantial achievement to get a meeting with someone so high up in the Commission.

The creative community was also represented by the French director and writer Bertrand Tavernier, Robert Alberdingk Thijm, an impressive Dutch screenwriter, and the German screenwriter and director Fred Breinersdorfer, whose initial training as a lawyer was a useful tool in martialling our arguments. There were also representatives from SAA and its member organisations, led by the lobbyist Cecile Despringre.

Nellie Kroes was well versed in the arguments of the creative community in theory but seemed genuinely interested in the individual experiences of the film makers and writers in the room. Bertrand Tavernier argued with passion and humour for the economic and cultural advantages that reinvestment in the industry from enshrining a guaranteed share of copyright in European law would bring. Robert and Fred put a strong case for the collecting societies and I put the case for British directors, arguing that if we wanted a vibrant European film and television industry directors needed fair rewards for their work, detailing what the daily life of a director was like and why a share of copyright was crucial.

I also argued the case for opportunities for women, pointing out that in a freelance industry there was no maternity or childcare provision and pointing out that residuals helped to support directors in lieu of these, arguing that we worked the hours of investment bankers without the remuneration. Bertrand put the case eloquently: "We are happy, and we have wonderful lives, but we are not rich. There is a perception in Europe that we are fighting for these things to line our pockets. The fact is that we are doing it to survive and we are arguing for it in order to be able to go on to make more films".

Nellie Kroes said that it had been very helpful to hear individual stories and asked us to come back for a follow up meeting with concrete proposals of precisely what we would like to see enshrined in law in order to protect our community." Susanna White

Adjusting the Colour Balance: A report on BAME representation among directors working in UK TV