Welcome to part 2 of our interview with Colin Barr, director of Space Dive. For part 1, click here.

On Sunday 14th October 2012, 8 million people were glued to YouTube to watch the site’s biggest livestream to date: Felix Baumgartner’s record-breaking skydive, in which the Austrian fell from around 120,000 feet back down to Earth.

During the jump and in the moments after Felix landed safely, half the worldwide trending topics on Twitter were about the event, whilst a picture of Felix back on terra firma generated nearly 216,000 likes on Facebook.

But there is far more to the story than what the world saw that day. Space Dive, a forthcoming documentary about Felix’s extraordinary leap, will give the inside story on Felix and his team: the setbacks they faced, the obstacles they had to overcome, and the relationships they forged along the way. We sat down with the director, Colin Barr, to find out how he prepared as a filmmaker, just how long he worked on the project for, and why he was so inspired to take up this challenge in the first place.

Directors UK: How can you be confident that the filming kit will function at that altitude? How useful were the dummy jumps leading up to it?

Colin Barr: Yeah, there were dummy jumps, and we did some work in pressure chambers too. In a pressure chamber you can control the temperature and the pressure, so you can pretty well accurately recreate the conditions, and see whether the technology’s working ok. So there’s a lot of testing on the ground.


'We had three RED 4K cameras on the capsule and two of those fogged up. So even in the final jump, some of the cameras didn't work in the way that we wanted them to.'

CB: That’s it really! We did one, unmanned test where we sent a dummy capsule up to 128,000 feet with the camera technology on it, which was really useful. But there’s only so much you can do, because it’s so difficult to do: and it costs an absolute fortune! So you can only test so much, then you are kind of in the lap of the gods.

You want back-up cameras – you might use two cameras on one angle say, to make sure at least one of them works. We had three RED 4K cameras on the capsule and two of those fogged up. So even in the final jump, some of the cameras didn’t work in the way that we wanted them to. But thankfully there was enough that meant you didn’t really notice it.

D-UK: Going back to the budget, there was an attempt at a jump the week before but the weather put paid to that, and you said earlier you were planning one way back in 2009. Was there a point where, if it had kept failing, the production companies involved would have said “we’ve spent too much” and pulled the plug?

CB: To be honest I think everybody was in so deep that it was going to happen; whether it’s the organisers, the BBC, any of our co-producers, I think everyone had come so far that nobody was really thinking about pulling out. If it hadn’t worked and they were going to go again next year, I had a 70-minute cut of a film that was waiting for a final jump. We’d all just have to go away and come back again next year. What’s another six months after four years!


'Felix is used to being in complete control of everything - it’s kept him alive all his life. He had to give up some of that control to be kept alive on this jump, and I thought, thematically, that was really interesting.'

D-UK: Away from the jump, are there other aspects of Felix’s life and personality that you wish to tell in this film? What was the story you wanted to tell?

CB: Well, it was as much to do with his relationship with Joe. I was really interested in how different Joe and Felix were: Joe was your classic, all-American test pilot, whilst Felix is a very un-American, skydiving, base jumper type. I was interested in how Joe had to try and turn Felix into something he wasn’t, which was more like a test pilot than a skydiver: somebody who was disciplined, somebody who understood risks, somebody who understood how to fly a capsule.

Most importantly, and this is the thing I think Felix struggled with most, was learning how to work with a team. He was just so used to doing everything by himself, then all of a sudden he has to rely not just on technology but a bunch of scientists and engineers, and he’d never done that before. So I was really interested in trying to capture some of that struggle that was going on. Ultimately Felix is someone who’s used to being in complete control of everything, and it’s the thing that’s kept him alive all his life, and he had to give up some of that control to be kept alive on this jump, and I thought, thematically, that was really interesting.

D-UK: And did he struggle to do it? Was it difficult for him to relinquish some of that control?

CB: Yeah it was really hard. He had a major struggle with the space suit itself: a claustrophobic type reaction, he just couldn’t bear it. He really had to overcome all sorts of anxieties that he had, which Joe was able to help him with. But what with really at one stage...you know, they really did push the project to its limit, it wasn’t an absolute foregone conclusion that he was going to be able to jump.


'There was a point in the final jump where it looked like they might have to abort. There are all sorts of dimensions to the story that I think the film will be able to capture which the live feed wasn’t able to '

D-UK: But I suppose that makes for an interesting documentary: it’s got all the necessary ingredients...

CB: Yeah, I hope so, although of course everybody watching it now knows that he succeeded, so it’s an interesting balance. I hope that interest carries through, you know? I got a really strong sense as well when I was watching the news that everybody was watching but nobody was really getting the story. There’s a massive story there that’s not really coming across.

D-UK: I suppose it comes down to how it’s marketed: if they market it in such a way that states there’s more to the story than people know that should keep them interested, one would think...

CB: Well that’s what I’m trying to push them to do, I’m trying to say “the whole world watched, but didn’t see the real story”. And that, I hope, we can use to our advantage.

D-UK: In terms of the filmmaking process, were there other documentaries or other stories that acted as an influence on how you chose to tell Felix’s story?

CB: It wasn’t so much that there were other documentaries that influenced it; what I was trying to avoid was doing anything that had a sort of, “gee-whizz”, Virgin Galactic, space feel. All our references were from the late Fifties and early Sixties: we wanted it to feel like... especially with the kind of characters involved, there were quite a lot of older men involved in this project, from a background with NASA or the Air Force.

I wanted the references not to be base jumping and adrenaline sports, but to do classic, timeless style references: hand-crafted, things you could touch. We wanted it to feel much more about engineering than extreme sports. All our visual references were colour palettes from the Sixties, photographic techniques from the Sixties, or old college spaces from the Sixties: wood panel rooms, design blueprints. We’ve got quite a lot of animation in the film as well, and all the references for that came from that period as well. We were trying to avoid making it self-consciously 21st Century, and instead something that referred backwards.

D-UK: It does feel a bit like, from what you’ve said, that they’re passing a baton almost, from the older generation of Air Force pilots, to base jumpers and extreme sports practitioners, which is obviously a very modern phenomenon. It feels like an interesting clash of characters, if clash is the right word...

CB: No clash is right, and I think it’s also an interesting clash in scientific terms. You’re talking about engineers and scientists who are used to working for governments not fizzy drink companies, and just at a very basic level that clash is interesting. It’s also, probably, a signal of what’s going to come more and more as governments invest less. You’re going to find private enterprise entering space exploration more and more, and it’s not easy, it’s not simple: quite often the bottom line matters far more to private enterprise than it does to a government. That creates all sorts of strains that a lot of these scientists aren’t used to. It’s a really interesting interface that, I think.

D-UK: I was amazed when I found out that Joe Kittinger did that jump back then...

CB: Stunning. He didn’t know if he could even survive at that altitude. Some people thought he would just float away or just explode straight away, even in a suit. They really were going into the unknown.

Joe’s incredible anyway, he’s just such a class act. I completely loved him.

CB: You know I think he spent so long...I think on the one-hand he was euphoric and now’s there a bit of a “well, what next?” quality: what do you do, how do you replace that? But for the next month I think he’s just going to tour the world, appearing on chat shows...

CB: Yeah! I think he’ll be coming over here in a couple of weeks.... 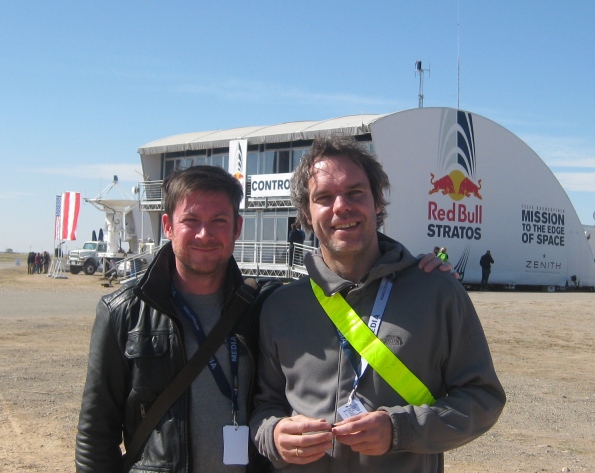 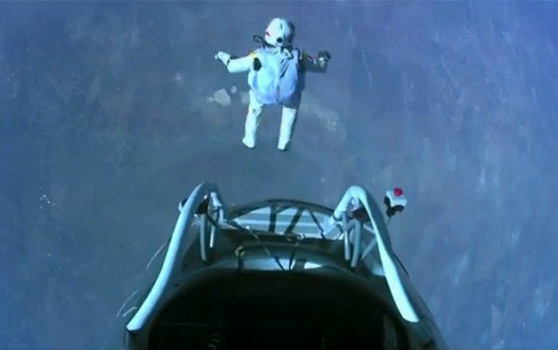