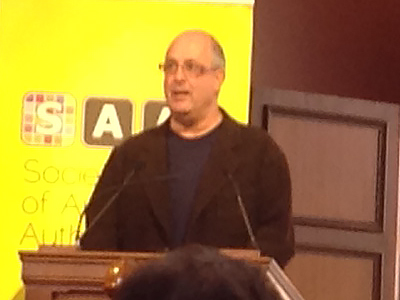 The focus of the White Paper is a call for a new right of remuneration for authors of films and TV programmes when their work is made available online, underpinned by two key conditions:

These last two conditions are to ensure that the new right actually results in revenue flowing through to authors.

The White Paper was launched at a well-attended event in Brussels to an audience of interested stakeholders, politicians, civil servants and journalists.  Roger gave a keynote speech in which he gave an account of what directors actually do, the unpredictable and freelance nature of their work, of how much of their time was spent in unpaid development, and how only a tiny percentage of proper remuneration for their copyright accords digital platforms would revolutionise their industry:

"[...] How can we help directors/authors build sustainable careers, in the UK and in Europe? Careers where talent can develop through experience and over time. Directing, alas, is something best learnt on the job. It’s very hard to get better at directing without…well… directing. How can we nurture an environment where talent, when spotted, doesn’t just rush off to Hollywood? I have been fortunate enough over the years to go off to America every now and then and make a studio film that subsidises my next two or three films in the UK. But I wouldn’t choose to work in America. I want to work here in my own environment and culture telling European stories that reflect my understanding (or otherwise) of the world around me.

This is why the issue of authorial remuneration is so central to this white paper. A small share in the gigantic success story of European film and TV as it explodes into other diverse forms and onto other diverse platforms.

These sectors generated revenues of 122 billion euros in 2013. In the same year, audio-visual author’s collective management organisations collected just 452 million euros … that’s to say 0.37% of the total … to distribute to European writers and directors. This isn’t only in-equable … it’s unsustainable. Audio-visual authors need the stability and continuity that would come with a small and fair share of this torrent of riches. One could even argue: how can there be an incentive to please an audience when there is no proper connection with that audience?

But how, in the digital jungle, can an individual director possibly hope to trace and keep track of what might be owed to him? To find out where the work is being shown in this ever more complex landscape of download, VOD, cable etc. And even if they should get that far, who should they be claiming their contribution from? The original producer? Production company? The TV or Film company that initially held the rights? The distributor? Sometimes even finding out who owns what you once made can be impossible. The solution being tabled here today seems the only one that is serviceable, fair and transparent: that the final distributor of an audio-visual work, be that a TV company, a VOD website, or whatever, is considered by law to be responsible for payments to the authors. These would then be collected by their CMS’s and distributed accordingly. In fact, in Spain, in Italy and in Poland this principal already pertains.

We are exceptionally lucky to be doing jobs that we love and would almost pay to do. But a relatively small adjustment in our fortunes could make an enormous difference to the health and vigour and diversity of our amazing industry as it moves into ever-more demanding and exciting times."

You can also watch a number of videos from the launch (including Roger's speech) here.