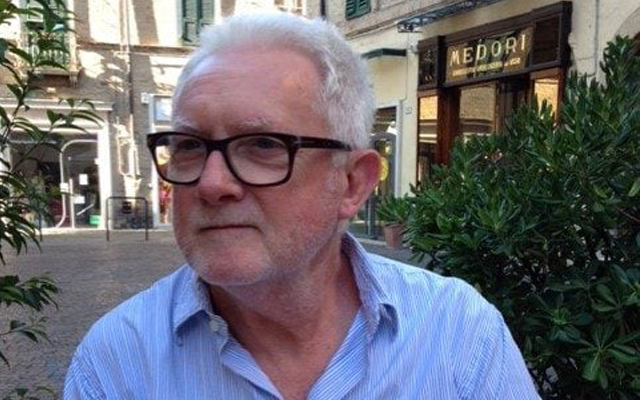 We were saddened to hear of the passing of Peter Gordon, a Directors UK member and Grierson Award-winning documentary maker with a keen interest in social issues and portraying human bravery.

Born into a naval family in Alexandria, Egypt in 1945, Peter studied film at Ravensbourne college — and joined the BBC not long after as an assistant film editor. As an editor he worked on Inside Story and Everyman before going freelance.

In 1983, Peter directed A Message From the Falklands for ITV’s Yorkshire Television. It would not be the last time his work focussed on the cruel realities of war, and he won a Grierson Award for Dunkirk: The Soldiers’ Story (2004) — in which veterans of Dunkirk recalled their experiences of the evacuation. Two years later, his BBC film When Our Boys Came Home (2006) investigated the psychological impact of the Iraq War upon the soldiers who served.

Domestic issues were also thoroughly explored in Peter’s documentaries. His second Grierson Award came for Asylum (2006), which followed the lives of three refugee families in the UK. Asylum was also honoured by Amnesty International. He directed a series of short films for The Guardian on frontline of poverty in Britain – some of which can still be watched here. His final film, Still Waters (2017), was a crowdfunded project telling the story of a teacher with bipolar disorder who provided a sanctuary for a displaced Hispanic community in New York.

Peter Gordon passed away in January 2019 at the age of 73. He is survived by his wife, the producer-director Ann Lalic, and his children.

Peter is fondly remembered by those who worked with him, and his colleagues William Ennals, Peter Moore and Nikki Clemens have provided their memories of Peter below.

My overriding memory of Peter is laughing a lot.

I worked as editor for him on his last films and, although the themes were serious and heartfelt, humour became a necessary part of the process and even a guiding force.

The five short films on poverty for Guardian Films were shot with great conviction and economy, and clearly the contributors were grateful for his warmth and sensitivity. But that wouldn't have been enough. He had a lightness of touch with them and, even in the telling of lives without hope, humour was never far away.

For his last film, Still Waters, about a small schoolhouse in a downbeat part of Brooklyn, I joined him on set briefly.

I much admired his self-shooting style — aligning himself with the flow of the scene, letting things evolve, while always seeming in charge. He was quietly confident in his approach and those he filmed were confident in him.

Back home in the edit, in between laughing about the state of the planet, the process was never less than inspiring...from letting those magic moments sing, to his preference for a light dusting of captions (rather than full-on narration), to his view that music should reflect rather than drive emotion.

Story-telling with wall-to-wall commentary and music may satisfy many TV appetites but Peter’s approach was rare — born of self-assured, focused filming and the warmth and love of telling people’s stories.

“It wasn’t just heaven for Peter lounging on the sofa in the cutting room watching his rushes, but it was heaven for the editors he worked with”

The cutting room, as Peter insisted on calling it, long after it had been rebranded into ‘the edit’ was one of his very favorite places to be. Leaving art school and joining the BBC in the late 1960s he started as an assistant film editor, managing to avoid the usual initiation of being wrapped in camera tape and bundled into a trim bin and put in the East Tower lift.

He was unlikely to have been a good assistant but he was known for his sharp mind and wit. In the corridors of East Tower, Ken House and Lime Grove he made lifelong friends of his colleagues, amongst them Mark Anderson, John Barnes and it was here that the met his wife Ann Lalic. He was swiftly promoted to editor, this at a time considered to be the golden age of TV documentaries. He worked on a slate of award winning observational docs, including the ground breaking Sailor series, a 10-part work about life on board HMS Ark Royal, with it’s famous opening sequence set to Rod Stewart’s Sailing soundtrack. Roger Mills was the executive producer who was impressed enough by Peter to give him an attachment as director in the docs department and subsequently gave him a permanent directors job on the ‘40 minutes’ strand. The films could be about any possible subject, with the only proviso that they run for 40 minutes. This was perfect for Peter who had free rein to explore the subjects that fascinated him and to develop his own personal style of film making.

At this time he worked with a full film crew, cameraman (few women worked in this role at the time), camera assistant, sound recordist and assistant and a PA. He recalled later how uncomfortable he could feel with such a large entourage arriving to film in a tiny flat on a council estate. Later he jettisoned this way of working when new technology allowed him to shoot and direct with a lightweight video camera. Most of his films were made in the UK but he also took on projects in some pretty dangerous places such as Iraq and Israel, where he exhibited his characteristic coolness and focus. But gathering the material was a means to an end and that end was to be holed up in the cutting room, crafting the story into the elegant and poetic documentaries for which he became so well known.

It wasn’t just heaven for Peter lounging on the sofa in the cutting room watching his rushes, but it was heaven for the editors he worked with Mike Flynn, Nikki Clemens, Emily West and John Dinwoodie all adored him and his wonderfully laid back modus operandi. The day would generally start sometime after 10am, with croissants and coffee, there would be a session viewing footage, chatting and marking stars in the ‘Star Log’, a term stolen from Star Trek that identified most of the ‘good bits’. The editor would be left with the freedom to fillet this down to a manageable first cut, a process so simple that it was just putting the good bits together. A chronological order, a very modest shooting ratio, little or no commentary, no music and a few captions gave the elegant and pared down presentation of the story that was Peter’s hallmark. Soon after lunch Peter would disappear to pick up the children from school or do a bit of shopping for supper. There was never any overtime or indeed any nervousness ahead of a viewing by the execs who had commissioned the film. Viewings which on other productions were accompanied by working through the night and a form of hysteria by the director and editor on the day were completely alien to Peter. On his films he merely extended an invitation to view the film, generally close to the last day of the editing schedule and whilst he listened to any notes and suggestions made he would rarely act on them. The film he wanted to make was finished and that was how it would be transmitted.

With such a relaxed way of working and an always generous schedule there was always lots of time for fun. Peter, with his talent for drawing would annotate the transcripts with grotesque cartoons of any contributors he was less than enamoured with. His talent for mimicry was fantastic, he could do wicked impressions of most of the contributors and many of his colleagues. Working in the cutting room would often feel like he was putting on a one man show. There were catch phrases that would be coined in the edit from phrases from sync interviews, generally shot on the hoof, that tickled him. A regular one would be the question he used with all the contributors on the Breaking Point series about ‘Relate’ marriage guidance counseling – ‘So when did it all start to go wrong?’, a phrase that was applicable to so many situations and one which when delivered with a particularly serious expression always had the everyone laughing.

Editing had far fewer frustrations for Peter than shooting. Finding good contributors was key to his films, and Peter had the confidence to know that whoever agreed to be filmed would have a story to tell and he would portray that in a sensitive and humane way. His films were not obviously political but quietly subversive, his passion was to tell stories from voices that might otherwise go unheard.

Peter’s unique film legacy is a series of documentaries revealing to us our own lives through the lives of others over the last 40 years.

“I loved Peter’s mischievousness, but what I envied most was his composure.”

The Peter Gordon I knew was naughty and subversive. I’ve never worked with anyone, with whom I laughed as much. We had some of the silliest and best of times at Yorkshire Television in the 1980s.

Peter was a maverick. He didn’t like bosses, he didn't like brain storms and, in fact, he didn’t like coming into the office at all. He preferred to read books and think at home. He only came into Yorkshire TV to collect his expenses.

He was given free rein because he was talented. And, some of his films were wonderfully scurrilous.

Perhaps the millionaire playboy Rupert Deen should have been better informed about Peter. Instead he foolishly let himself be filmed sitting in his Mayfair bathtub being served a Bloody Mary by his butler. What could possibly go wrong?

Believing the camera was his friend he boasted: “I don't even pretend to work myself, though some of my friends do.” By the time the penny dropped, it was already too late.

Peter’s favourite targets were pomposity and unbridled power. Sent to make a short feature about the USS Nimitz, the world's biggest nuclear aircraft carrier and the pride of the American Naval fleet, Peter used Jimmy Hendrix’s discordant version of the Star Spangled Banner as a soundtrack.  An American viewer subsequently complained that the film had “crapped on the American flag”.

I loved Peter’s mischievousness, but what I envied most was his composure...

On a run-down Liverpool estate two scousers approached our film crew. One said provocatively.. “So who’s the geezer with the grey hair...and big ears?”

“He’s the director”.  I said rather defensively. “He’s in charge”

“He doesn’t seem to be doing much, does he ?” The other guy said.

Well, they had a point, because Peter’s great gift was in making it all look effortless. If he was stressed he didn’t show it.

Then the first guy turned to me and said: “So what’s your job?”  I said: “I’m watching and learning”.