It was with great sadness that we learnt of the death of director and producer Christopher Morahan, whose work spanned the theatre, television and film. We reflect upon his life and 60-year career.

Christopher Morahan was born in London on 9 July 1929, and was educated at Highgate School. He trained at the Old Vic Theatre School before starting at the BBC and then ATV in the 1950s, where he started directing on Emergency — Ward 10.

In the 1960s Morahan hopped between platforms, directing both plays for Armchair Theatre (ITV 1963-64) and TV programmes such as The World of George Orwell (BBC 1965). His drama Talking to a Stranger (BBC 1966) was written by John Hopkins and starred a young Judi Dench. In the 1970s he became the BBC's head of plays, and focussed mainly on theatre throughout the decade.

In 1984, Morahan produced the 14-part series The Jewel in the Crown for Granada, directing four episodes. The programme starred the late actor Tim Pigott-Smith and Charles Dance. He followed up on the success of the series with Clockwise (1985) starring John Cleese and with a comic screenplay by Michael Frayn.

Morahan’s later work included Paper Mask (BBC 1990) starring Paul McGann, and The Peacock Spring (BBC 1996). The latter featured the screen debut of his daughter, Hattie Morahan. After continuing to work in television and theatre he was made a CBE for services to drama.

Christopher Morahan is survived by his wife Anna and his four children. Read a full obituary in the Guardian.

We asked some Directors UK members to share a few words about Christopher:

Another major figure that spans the era from the distant days of live black-and-white television drama, right up to today’s digital broadcasting, has left us. Christopher Morahan began his career when directors dominated the studio with split-second control over cameras, microphones, lights, props — yes, and even actors. When the technology changed, he changed. But he still remained a powerful creative presence, as the long list of his impressive work shows.

It is cosy to think of the actor Tim Piggot Smith – who died the same day as Christoper – sitting in some celestial pub discussing the merits of The Jewel in the Crown when both were at their working best.

A director rarely gets the chance to work alongside other directors. When I chose Christopher to be my co-director, to the delight of Channel 4, on A Dance to the Music of Time, he provided sterling support, not an easy task, throughout the series.

The television screen has lost a rare talent.

Alvin Rakoff is the director of over 100 television plays, as well as a dozen feature films including City on Fire (1979) with Henry Fonda and Ava Gardner. His other work includes Death of a Heavyweight (1957) with Sean Connery and Michael Caine, and A Voyage Around My Father (1982) with Laurence Olivier. 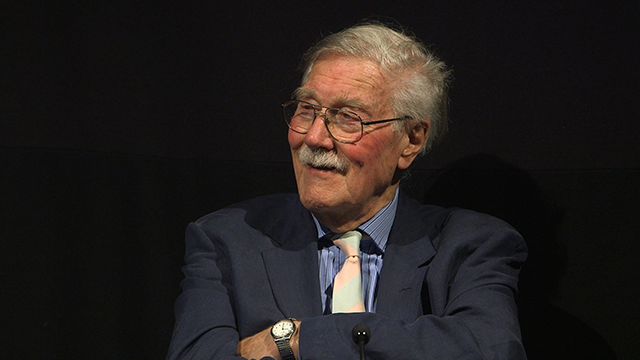 Christopher Morahan, who died last Friday aged 87, was a multi award-winning director of TV and theatre, who also managed to fit five movies into his long and varied career. Michael Billington’s piece in the Guardian gives an excellent overview.

Though he continued working into his mid-eighties, Christopher admitted to being a slow starter. The son of a film production designer who worked with Hitchcock, he decided at 20 that he wanted to direct films. The only training for directors available at that time was in theatre, at the now legendary Old Vic Theatre School run by Michel St Denis, which he attended from 1951-53.

Despite this fortunate start, he lacked the confidence to jump straight into a directing career, so worked in stage management for several years, moving into ITV when it launched in 1956. After a year as floor manager on Emergency — Ward 10 at ATV he finally got to direct  – albeit at the floor manager’s rate (some things never change!). 80 episodes of Ward 10 honed his TV craft. By 1963, when I observed him during my BBC Training Course, he was one of the top directors of studio drama. This is now a completely forgotten art of course, but it suited him. (And indeed me.)

The respect for accumulated craftsmanship never left him, and he was always impatient of amateurism. He was often just impatient, too, having quite a temper. Tall and upright, with an air of military authority, sometimes even bossiness, he could be terrifying to young actors or inexperienced technical staff. It was best if you stood up to him. I had to do this when directing in BBC Plays Department, which he ran from 1972-77, but it actually led to us becoming good friends.

I think this was key to his capacity to generate work for himself: he was never without a project or two in the pipeline. He was in fact a natural producer, his finest achievement being to set up and produce all 14 episodes of The Jewel In The Crown, while directing half of them. The same qualities certainly led Peter Hall to invite him to become Associate Director at the National, where he had a string of successes, including Wild Honey, Michael Frayn’s version of Chekhov’s Platonov. Frayn also wrote the screenplay of Clockwise, Christopher’s most successful film. Comedy was, I would say, a particular skill of his; he understood how the machinery worked. He also really loved, and understood, the work of George Bernard Shaw.

Christopher was a force of nature and his death leaves a large gap. He achieved an extraordinary amount in his long professional life, for much of which he and I were friends. In the early eighties he was also active with me and others in setting up the Directors Guild, the predecessor of Directors UK and Stage Directors UK. My wife and I are close to his family, to whom we, along with many of you I know, offer our respects and condolences.

Piers Haggard has directed a wide variety of work, including cult classics such as The Blood on Satan’s Claw and The Quartermass Conclusion, as well as the TV masterpiece Pennies from Heaven. Piers played a significant role in founding the Directors Guild of Great Britain, the Directors’ and Producers’ Rights Society (which later became Directors UK) and also Stage Directors UK. He was awarded an OBE in the 2016 New Year’s Honours List.