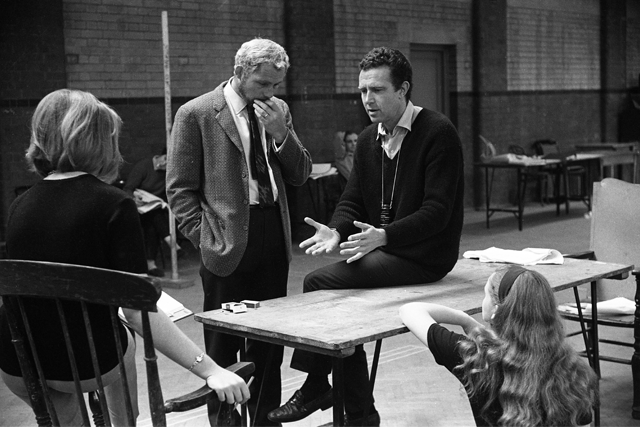 Celebrated television and film director Philip Saville sadly passed away in late December. Philip was known for his work on a number of seminal TV productions including Hamlet at Elsinore and Boys from the Blackstuff.

Philip Saville was born in London in 1930. His directing career began in the 1950s and by the end of his career he had become “one of Britain’s most prolific and pioneering television and film directors” (Screenonline). He directed over 40 plays for the long-running ITV series, Armchair Theatre, and won BAFTAs for Hamlet at Elsinore, The Life and Loves of She-Devil and Alan Bleasdale drama Boys from the Blackstuff. He also directed feature films The Fruit Machine, Metroland and The Gospel of John. Read a full obituary at The Guardian.

Philip Saville died on 22 December 2016. He is survived by his wife and four children.

A couple of directors contacted us to tell us about their experiences working with Philip:

January 1973. I turned up at BBC Television Centre, fresh-faced, ‘on attachment’ - as the Beeb called it - from BBC Radio, to be an AFM (in those days the BBC did not use the term 3rd AD). I was sent to the East Tower, a TV Drama outpost, to join my first production. Behind the director’s desk sat a strikingly handsome, distinguished man in his early 40s; greying but fashionably glamorous. When he spoke, his voice was dark brown, educated, authoritative. Philip Saville inspired awe.

I can remember three TV programmes that I was knocked out by as a youngster: Quatermass and the Pit, which, along with half the population, I watched from behind the sofa; a few years later Hamlet at Elsinore, shot on location in Demark; and In Camera, an adaptation of Sartre’s Huit Clos. Philip directed the latter two. In a period of high quality single dramas Philip was a legendary director.

By January ’73, however, he had been abandoned to the East Tower after a year in exile from the BBC Plays department. His previous studio production had overrun by a day in an era when half an hour was considered exceptional and only possible after local negotiations with the ETU. Plugs were definitively pulled at 22:30.

The play was a four-hander set in a one-room bedsit in London. The cast were Caribbean and the writer, Alfred Fagan, was playing the lead role. I assume the powers that be thought even Philip could not fail to shoot the 30 minute piece in the allocated one and a half hours. I was ‘trailing’ the actual AFM and excited when the week of rehearsals began. Sometime on the second afternoon, the AFM was sent on an errand and Philip produced a small silver snuffbox. He then carefully rolled a couple of joints as the cast ran the opening scenes and we were all offered to partake as he gave notes. I was surprised to be included and concluded that mainstream TV was not so different from the university drama that had nurtured me. It somehow reinforced the image of the Philip Saville whose girlfriend was Diana Rigg and who drove into Television Centre each morning in his Mini Moke.

But as the week progressed I discovered what a true interpretive director was. At the mid-point of the play, Alfred’s character, a struggling writer, exploded and set about wrecking the furniture and spray-canning the word ‘Shakespeare’ on the wall. This was potentially problematic given the practical impossibility of any logical reset in the multi-camera studio environment. Warnings were raised but Philip was more concerned with bringing another flavour to the piece. He instructed the designer, Alan, to make the four-wall set from four free-standing pieces with no corners to the room. He then asked for a 360° Chroma Key blue cyclorama so that when the character was wrecking the apartment the ‘walls’ would turn to black silhouettes and Alfred would appear to be in a Gauguinesque jungle expressing primitive rage. Alfred loved the idea. Designer Alan went ahead.

On the recording day we had a dress run but ‘marked through’ the throwing of the furniture, painting the floor and walls - and all went well. I did ask the actual AFM, “What happens if the double bed hits the wall piece and knocks it over? How can we clean the paint off the studio floor if Alfred dries?” The answer I remember as a shrug. “That’s Philip”.

Recording began. No recording breaks were planned through the ambitious middle section. I remember standing with my back against one of the flats to hide out of shot, fingers frantically crossed as Alfred roared and started his big soliloquy as he threw the furniture across the set. I had cans on and could see a monitor slung from the gantry. He sprayed a line across the floor, flung a couple of chairs. He lifted the double mattress and just managed to heave it across the line. He struggled to raise and topple the bedstead. I felt it shake the flat I was leaning against but all was well. He grabbed the can and started spraying ‘Shakespeare’ across the bare wall. I breathed a sigh of relief - we were there, the worst was over. Then I heard Philip’s voice in my cans. “Cut!” What?

“Cut, cut, cut!” I couldn’t think what was wrong. All seemed to have worked brilliantly. There were two more minutes before the planned recording break. What did he want?

Philip appeared down the studio steps. “Look!”, he exclaimed. Alfred had spray-painted ‘Shakspeare’ not ‘Shakespeare’. Everything ground to a halt. Philip, Alfred, Anne Head, the producer, the technical manager, the camera crew, the sparks gathered in the middle of the set discussing what to do. “Can you repaint the scenery?”, “Plugs will be pulled”, “Shakespeare often spelled it like that”. I don’t remember if we got an overrun but I know that we had 20 minutes’ material left to record when we restarted with 25 minutes left to go. In other words, no stopping for anything.

We made it. When I saw the play on transmission four months later, that last twenty minutes was electric. There was the odd lens hood in shot for a moment. A camera was seen fleetingly in one of the non-existent corners of the room at one point. But the power of the piece transcended the odd technical imprecision. Philip’s energy had lifted the piece from the ordinary to another plane. And I’d not felt that excitement since I first directed at university. My path was set.

Over twenty years later, I was directing an Alan Bleasdale version of Oliver Twist for ITV. Philip had, of course, been the director of Alan’s Boys from the Blackstuff in the 80s. I met so many boys searching for my Oliver but one boy stood out: Sam Smith. As the weeks went on I got to know Sam’s mum Jill as she chaperoned him. One day I must have commented on how Sam got the part because he was so good in his final audition. “Well”, she said, “I must admit he had a bit of help. He got a bit of tutoring from our friend who lives round the corner. You might know him, he’s a director. Philip Saville”.

Philip inspired many of my generation. He was a television director in an era when directors, not producers, ruled; when a visionary eye on the world produced extraordinary work that was not ‘committee’d’ into the bland, the predictable, the ordinary. He and his like are sorely missed.

As a holiday relief AFM back in 1966, I was extremely fortunate to be on the crew of The Machine Stops, a science fiction piece by E. M. Forster, produced by Irene Shubik, and directed by Philip Saville.

This video production (as opposed to a film one) was virtually all shot in TC3 at Television Centre. I remember thinking at the time that not only was this an extraordinary piece for television, but that the director, Philip Saville, was a man of amazing vision. This - amongst others - took the form of a 100 foot ladder reaching to the roof of the studio, upon which the actor Michael Gothard climbed to the top (health and safety?!) eventually entering the eye of his mother, played by Yvonne Mitchell. We also had a suspended monorail across the studio, carrying passengers in a capsule and depositing them into a station. WOW! The designer was Norman James.

More significant however, was that the essence of what E. M. Forster had written way back in 1909, was now, today, fast becoming a reality, and I can think of no better tribute to the memory of Philip Saville than to see a repeat broadcast of this magnificent epic.

John Bruce is the director of over 120 plays, films, series and serials. His credits include the Emmy-nominated The Reason of Things and The Woman in White, as well as Faraday’s Dream, Kate the Good Neighbour, Miss Morrison’s Ghost, Terra Nova, The Prime of Miss Jean Brodie, The Adventures of Sherlock Holmes, The Bill, Casualty and Agatha Christie’s Poirot.

Watch the other side of Gravity distress call