Directors UK member Peter Nicholson recently travelled to Japan to make a documentary on the devastating tsunami that struck there earlier this year, where he witnessed first-hand the destruction it has caused to the country. Below, Peter gives his account of his experiences there, and the effect the disaster has had on the nation and its people.

At about 7.30am on the morning of 11 March 2011 I was checking the weather on-line when a breaking news banner came up with news of the massive earthquake that had struck the north-eastern seaboard of Japan. I clicked to the news site and witnessed the shocking live aerial footage as the tsunami wave surged across the coastal plain. It was hard to believe what I was seeing.

I quickly emailed a Japanese colleague and friend in Tokyo… “Was she alright? Our thoughts are with her and the Japanese people”. What can one say? She came back quickly… “Yes, she was okay… Some damage to the tiles and the fish-pond from the quake… But the coastal communities to the north-east in the Tohoku region of Japan, were in the midst of a cataclysmic natural disaster on a scale that was truly unimaginable”.

Little did I know that seven months later to the day I would be in that region filming with survivors in six of those coastal towns for a Channel 4 documentary. 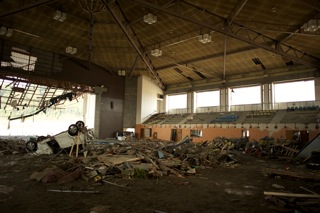 Five years ago I was also in Japan making a film about the final months of the Pacific War. I visited Hiroshima and watched the archive shot in the aftermath of the two atomic bombs. It was impossible not to recall those extraordinarily moving images of desolation as I descended for the first time into the still devastated communities of Minamisanriku and Rikuzentakata. A few twisted steel and concrete ruins were all that remained upright in an otherwise levelled landscape. These towns built across low-lying and vulnerable coastal plains had quite literally been annihilated.

Some 20,000 people lost their lives or remain missing from this disaster, but I still struggled to understand why it had been so many? Japan is a highly organised and disciplined nation. They drill for earthquake and tsunami situations. They have rigorous evacuation plans and designated centres and they had in most cases nearly half an hour to get to safe ground. But when I started talking to people I soon learned the answers.

The last big tsunami that hit this region in living memory was in 1960. They call it the “Chile” tsunami as it resulted from a massive earthquake off the coast of Chile that sent a tsunami wave across the Pacific. The wave flooded the coast to a maximum height of a little over three metres. There was quite a lot of damage and some fatalities. One of my interviewees, Mitsuyuki Sasaki, lost his older sister. In fact he was only conceived and born the next year because his parents had tragically lost a child to the tsunami. Now some fifty years on, he narrowly escaped this tsunami with just his stills camera. He could only look on helplessly as his home and the town in which he was born and raised, was totally destroyed. 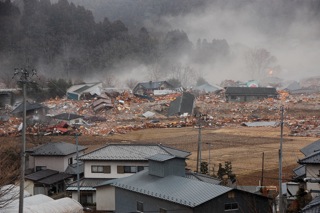 But the point about the “Chile” tsunami was that it entered the psyche of a generation. This set the ‘expectations’ of the worst that could happen and it set the yardstick for the sea defences that were built. Most of these communities were protected with sea walls and levees that were built to keep out waves of up to six metres.

Even more significant and tragic to this story are the evacuation centres. Many of these were also designated years ago on the ‘expectations’ set by the Chile tsunami. On March 11, this year hundreds of families diligently evacuated their homes and made their way to the “safe” evacuation centres, only to be trapped and drowned in horrific mass graves as a tsunami three to five times the size of “Chile”, levelled their towns. Yuichi Owada is a chief volunteer fire-fighter in Rikuzentakata, living, in his words, “with the grief and guilt of letting so many children and elderly die”.

I wandered around the ruins of the city gym in Rikuzentakata. This was one of the evacuation centres. Eighty people lost their lives here. And bar the removal of the bodies, nothing has been touched since the tsunami. It still looks like the aftermath of WWIII. Among the piles of twisted debris a car lies upside down on the floor. I recall basket-balls and a silver trophy nestling in the wreckage, and like the infamous Hiroshima wrist watch, the clock on the wall shows 3.31pm, the fateful moment of annihilation. It’s difficult to think about the terror and horror of what happened here and in many evacuation centres like it. 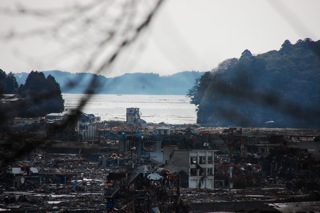 Seven months on, Yuichi Owada, the fire-fighter, is remarkably frank about things. The region, he says, “has received a lot of help with the physical clean up”. There are still armies of volunteers bussed in each day. “But there has been little support for people’s mental health. We’re Japanese, we’re taught to overcome adversity with mental strength. But that only works in normal situations. We’re not in a normal situation here”. He describes how he often can’t sleep or has bad dreams and how some of his fire-fighter colleagues sit in a daze. His daughter too has lost confidence and doesn’t like to be left alone. Others he describes have lost their judgement of time and start cooking meals at strange times of day. And worst of all there are a growing number of suicides in the region.

After the immediate shock and horror of the event itself, it is these deeper psychological issues that are now starting to reveal themselves. Thousands of people have lost family, friends, their homes, livelihoods and indeed the whole identity of their communities. They are all blighted by a deeply uncertain future and many struggle to see a way forward.

Some of the towns I filmed in, Kamaishi, Ofunato and Kesennuma will I believe successfully re-build and recover in time. They are bigger, their economic base is broader and they have areas that survived the carnage of the tsunami.

Other towns, I’m really not so sure about. The 8.9 magnitude quake caused the coastline to drop by three quarters of a metre. Now just the normal daily high tide floods large areas of what used to be shopping streets and housing neighbourhoods in both the towns, Minamisanriku and Rikuzentakata. Recently the Mayor of Minamisanriku admitted they may never re-build this town. The quake, the tsunami and the sea – nature, in short, has reclaimed the land.

I will never forget the filming trip to the Tohoku region. I even bought the T-shirt. I don’t mean to be crass. The money went to the emergency disaster fund. The Japanese characters on the T-shirt read that the people of Tohoku have great spirit and that they will rise up against this adversity and come through. I sincerely hope so.

Peter Nicholson is a bafta-winning director. He is the writer, producer and director of Japan’s Tsunami: Caught on Camera, an ITN production for Channel 4. www.peternicholsonfilms.com

Bringing a Production Value to your films