In (Hi)Story of a Painting: The Light in the Shadow, Directors UK member Gaëlle Mourre tells the story of one of today’s most celebrated artists: Artemisia Gentileschi — using cutting-edge virtual reality to immerse the viewer.

But how did Gaëlle get started in directing VR, and how does it differ to other forms of directing? We spoke to Gaëlle about her award-winning VR work below, and asked for her advice on getting into the sector, and the practicalities of directing with immersive technology.

Read the full interview below.

Tell us a bit about yourself and your directing career!

I studied filmmaking at the London Film School, where I made some amazing friends and collaborators. We were taught that our grad films would be our calling cards and I took that to heart – I made a bit of an “out there” short film, and it didn’t go down well at all at the end of year crits, but that film launched me onto my path.

I then made a gothic fairy tale short, starring Katie Leung, cementing my love for magical realism and the fantastical. It’s my favourite umbrella genre to explore topics that are otherwise hard to pinpoint. It allows us to experience a story on an emotional level.

I’m now working on a number of immersive projects, as well as my debut feature film. I have a number of series and feature concepts up my sleeve that I’ll be developing over the coming months. The pandemic has ironically been an extremely busy period for me, as I co-created an animated VR series, (Hi)Story of a Painting, and as that carries on progressing, I’ll be diving back into my first love: traditional cinema and TV.

How did you first get involved in directing VR projects?

It was a bit of an accident really, but a very happy one! I’d just left film school and was very open to exploring where my next steps would be. I wanted to tell stories first and foremost, and I still believe to this day it’s important to think about what the best format will be for a story – we already do this when considering whether or not a story should be a short, feature, series, mini series, so why not add immersive media to the toolbox?

So when my co-writer approached me looking to collaborate on adapting her short stories into films, we agreed that one of her stories, a sci-fi, would be served well in a format that echoed its content. I didn’t know anything about VR at the time; this was back in around 2015, so we didn’t have a plan for it to be a VR experience. But in 2016, I had a chance encounter with François Klein, co-founder of Digital Rise, who was looking for VR stories. I pitched him our concept and told him that I wanted to create a story built around unconscious interactivity — analysing the viewer’s gaze to determine which character, and therefore storyline, they subconsciously favoured. And that’s when François told me that VR was the perfect format for what we wanted to do. From there we partnered with Serendipity Films in 2018 (making our project the first VR Franco-Taiwanese co-production), and shot the film — which became Mechanical Souls — over the summer, and premiered it at Sundance in 2019. 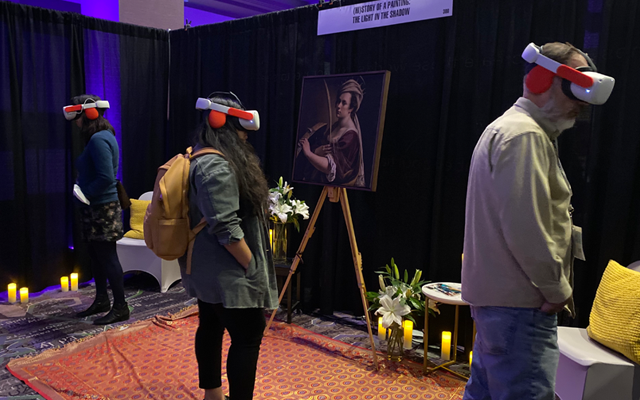 Viewers get a taste of (Hi)Story at SXSW.

How did you get involved with directing (Hi)story of a Painting? Was it always the intention for this to be a VR work?

A friend of mine told me about this grant, Creative XR, which was specifically for immersive projects. She encouraged me to apply because, with the pandemic in full throttle (this was in May 2020), there wasn’t any certainty as to whether there’d be another funding opportunity like this in the near future.

I’d just come off a freelance job as a Story Developer at an immersive and traditional media studio and had just finished writing my series pilot, so it seemed like the right time to jump head first into another immersive project. I’d studied Art History as an undergraduate and had always wanted to explore art and art history in some kind of immersive format, it was a vague idea because — as I mentioned — I had no idea about VR at the time, but essentially I wanted to find a way to explore the layers of making a work of art. My partner Quentin Darras and I brainstormed, and combined that concept with his passion for making complex ideas fun and accessible, and that’s how (Hi)Story of a Painting was born. We only had a week to finish our application and went all out – I wrote a pre-bible and a trailer for which Quentin created a 3D animation simulating what the project could look like in a headset. Our friend, Tracy Wiles, recorded the trailer’s VO and that was it! All this to say that, it took a few people to bring our application together, and it was worth it.

(Hi)Story of a Painting was absolutely always intended to be a VR work, for many reasons: Travel has never been an option for everyone and that became even truer during the pandemic. Nothing will ever replace seeing a work of art in person but the next best thing is seeing it in VR, at scale, and in an environment where you can move closer to the painting, look at it from different angles and create your own relationship with that work of art.

On top of that, immersive experiences help anchor information. It’s easier to retain information than if you just read or listened to it, because you’re almost living the story. I think that has an impact on how we retain information — we feel closer to what’s unfurling before us. 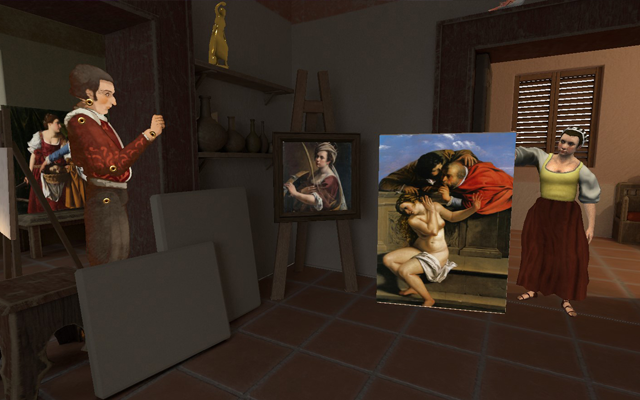 A still from (Hi)Story of a Painting.

They’re very different! It was a big challenge for me when I first ventured into VR. I had to unlearn my reflexes, of thinking in terms of shot sizes and editable rhythms. The whole flow has to make sense and work right there on camera. And it’s not quite theatre either; it’s really a hybrid. You can’t fix anything in post really (not that you really should in the first place, I hasten to add!) and if it’s not working right there as you’re filming, it likely won’t work later because you can’t edit a project the same way — you’ll give your audience nausea, they’ll be jumping around all over the place! I think we had a maximum of 3 or 4 cuts in one scene, and otherwise kept it to 1 cut per scene, to give you an idea of how different it is.

Working in live action VR was also like going back to shooting on film – you had to really pay attention to what your best takes were, and decide which ones would get properly stitched together. I loved that; it was like deciding which takes would get developed. 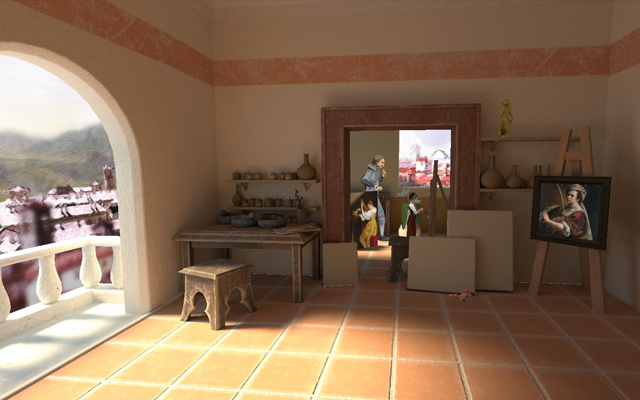 A moment from (Hi)Story of a Painting

Beyond the difference in grammar, directing my actors in VR isn’t too different in terms of the emotions and subtleties they need to convey, and how I at times help them get there. But what is different is they need to both express the subtleties screen actors convey, whilst occupying the space that theatre actors fill up – that’s no small feat for them!

Lastly, when you work in VR, you’re 100% world building, and that needs to come through in everything – your set design, music, soundscape and design, and your user journey: how are they going to travel through this experience? What’s the emotion you’ll leave them with? These are questions we ask ourselves when directing film and TV but in VR, because you are entering an all-encompassing world, you can’t not deliver on all these aspects, and working on that has helped me elevate my general practice as a director.

How do you know when a project feels right for the VR medium?

I suppose you have to ask yourself, is this an immersive piece, what do I want to convey and how do I want people to experience this? I think VR is all about sharing an experience and, at its best, an emotion. If you want your story to be lived, then consider VR. I made a documentary on glider pilots and we used a mix of traditional cameras and go-pros, which we mounted onto the planes both inside and outside. On a big screen, it made for an experiential film! If I’d had access to VR at the time, I probably would have chosen that medium to share the atmosphere of a day on the gliding field.

What advice would you give to directors looking to get started in VR?

If you can, buy a headset and start watching experiences. If you can’t buy a headset, borrow one and/or attend an immersive festival/exhibition and start exploring. Think of what works and doesn’t work for you and why – basically, what you already do for film and TV, but now apply that to VR. Attend bootcamps, write spec scripts and reach out to VR professionals – it’s a friendly industry, people are generally super happy to help you get your foot in the door. 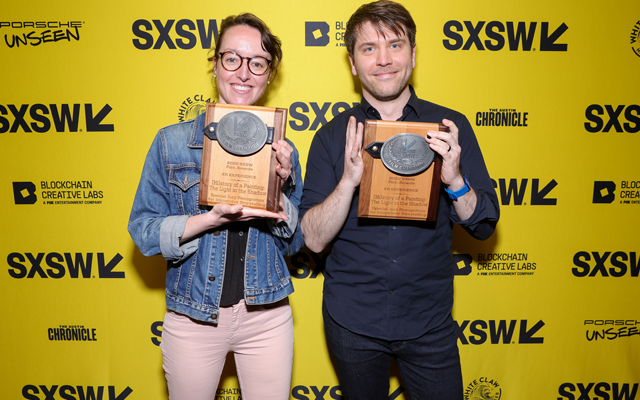 You recently took (Hi)story of a Painting to SXSW, and won an award in the process! How was that experience?

That was amazing! So unexpected and just so gratifying. We worked with a small team who came together to make this project, and working with Speech Debelle and Cerys Matthews on our episodes was one of the highlights, but also just seeing how much people believed in this project was extremely motivating, especially as Quentin and I did practically nothing else with our lives for months on end, working every day 10 to 18 hours a day. It was exhausting, and winning this award was just such a wonderful and concrete way to realise – it was worth it. SXSW premiered our first episode, and so just being invited to the festival with our second episode was amazing — the award was the unexpected cherry on the cake.

Everyone took a punt on this project, believing in it and in its value, so to see our project receive such an amazing seal of approval from our peers was really a wonderful boost.

What’s next for (Hi)story of a Painting, and what are you working on next?

We’ll be showing (Hi)Story of a Painting: The Light in the Shadow at Burghley House from the 23rd July to the 31st August this summer! You can find out more and book tickets here.

We'll also be showing at two more festivals in July: Mediamorfosis in Chile, with a Spanish version of the episode narrated by Francisca Valenzuela, and BIFAN in South Korea. We can't wait!

Meanwhile, I’m also writing a new immersive animation, There Exists, funded by the BFI — who announced it just last week!

We wish you all the best with it, and thank you for talking to Directors UK!