All change at FERA: we interview Dan Clifton and Bill Anderson 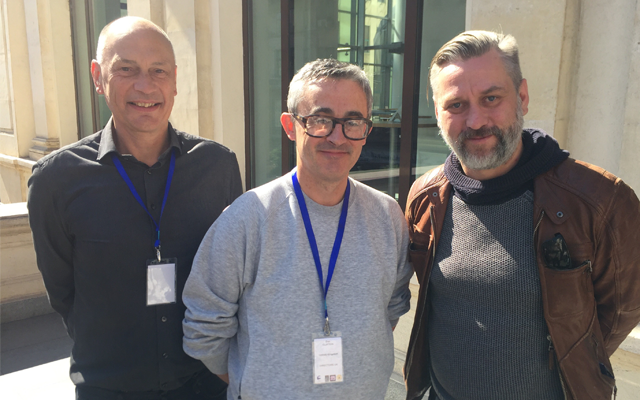 We spoke to outgoing Chair Dan Clifton and incoming Executive Committee member Bill Anderson about their next steps, the picture for directors in Europe, and what members can do to support FERA’s aims. Read our interviews below.

We spoke to Dan Clifton — a former Board member of Directors UK — about his time as Chair of FERA, and the issues most pressing to directors in Europe today.

Congratulations on your time as Chair of FERA. What are you most proud of achieving during your time there?

During my time as Chair we have secured a new EU Copyright Directive which modernises copyright in the digital era, and in particular introduces provisions to address the historically weak position of directors in contract negotiations due to our freelance status. This is potentially a game-changer, though in the UK it very much depends on what happens post-Brexit as to whether we will enjoy the benefits of this. FERA has also been centrally involved in the campaign for gender equality for directors across Europe and it feels like this is an area we have made some gentle progress in, even if there is still a long way to go.

What do you think is the biggest lesson your time as Chair has taught you?

When approached correctly, politicians find it very difficult to stand against the creative community, including directors. We are not only an important part of the Creative Economy, but after all we are cultural creators, something that is vital to the oxygen of our societies. When we act together with our sisters and brothers, in the directing community and beyond, we can achieve real change.

What do you think are the most pressing issues facing film directors in Europe today?

The digital shift is bringing all sorts of challenges as the traditional business model of both European cinema and the state television broadcasters is disrupted. There are new forms of distribution emerging, with powerful new players, and we need to engage with them. But things are changing very quickly and no one knows exactly what the future will look like.

Across Europe there is also an attack on freedom of speech and we keep hearing of directors under attack, being harassed by government or finding the release of their work blocked. As a community of film directors we need to mobilise against this assault on our basic democratic rights, and defend cultural diversity and what these basic freedoms mean for all of us in Europe.

What can Directors UK members do to support FERA’s causes?

Directors UK is a generous financial supporter of FERA, and this means a lot. But with Brexit I think it's important to take a very public and vocal stand that we want to continue a strong relationship with Europe, both with the industry and more broadly. I hope Directors UK members will find ways of standing up to demonstrate their commitment to this relationship, through FERA and other organisations, but also to politicians here in the UK. It's going to be very important at a time when many will doubt our priorities and interests.

What will you be up to next?

The usual mix of slaving in the cutting room, hustling for my next gig and trying to push forward on a few of my own projects.

We also spoke to Bill Anderson about his election to the FERA executive committee, what he’s looking forward to about the role and what he believes are the most pressing concerns for directors in Europe.

Congratulations on joining the FERA exec committee! Why did you decide to stand for this position?

FERA is an extension of “One of you, many of us” beyond the cliffs of Dover. Fellowship with our European peers is important: we earn money from the copyright in our work – a copyright established and enshrined in European law, copyright directors in the USA don’t possess. As Dan Clifton has come to the end of his term as Chairman, I thought it was vital for Directors UK to continue to have a voice on FERA’s executive committee. I’d seen how FERA worked as a delegate to their annual General Assemblies in Zurich and Warsaw, and I’ve now returned from Bucharest as a member of the elected Executive.

What are you most looking forward to in your new role?

Rolling up my sleeves with kindred spirits from 44 organizations from 34 countries and getting to work on behalf of 20,000 European film and TV directors.

What do you think are the most pressing issues facing directors in Europe today?

In the face of hugely powerful lobbying by the giant digital platforms and streamers, FERA helped swing the new Copyright Directive into European Law – with potentially huge benefits for us. But now this Directive has to be individually implemented by every member state into its own laws, and those same, defeated streamers and platforms will be vigorously lobbying to derail our best interests at national level. These players are powerful, but FERA will be coordinating a strategic approach to again make the directors’ voice persuasively heard - not just for our copyright and cash, but also our individual cultures.

What can Directors UK members do to support FERA’s causes?

Regardless of what Brexit brings, Directors UK members can support FERA’s common cause by continuing to fight to be recognised as authors of our work. The basis of our copyright (and those nice payments from Directors UK) is that we are storytellers not shot-gatherers; creative senior management not crew; chefs not burger-flippers. Do you want to be a cog in a Netflix algorithm, or an author?

Find out more about FERA.

Find out all about FERA