The Tempest comes to Dagenham: Deborah Paige reports from the DCF ‘Directors in Schools’ scheme

Directors UK member Deborah Paige recently gave a workshop on The Tempest at a school in Dagenham, as part of the Directors Charitable Foundation (DCF) ‘Directors in Schools’ scheme. Deborah reports on the experience below.

Dagenham Heathway: a shopping centre and a road of shops (Poundland/charity shops/Tesco), in the midst of it a smart new library which looks well used. On the 15 min walk to the school I ear-mark the Rosie Lea Café for a bit of lunch after the workshop.

The school looks huge and is pretty much fortified so you have to buzz reception to get the huge metal gates to open (pretty standard for London schools I think).

I’m early enough to get a coffee in the school café. There’s a good, friendly atmosphere between students and staff going about their business. Jenni (my teacher contact) finds me and we head for a new, very smart drama studio, picking up members of our group as we go.

I’ve planned a pretty tight workshop which I’ll be lucky to fit in to two hours, but with the aim of giving each student a chance to get up and explore the characters they’ve been assigned through scenes of the thirty-minute version of the Tempest they’ve been working on. It’s a workmanlike, barebones telling of the story (good for the purposes of this workshop, but painfully lacking the poetry of the original). 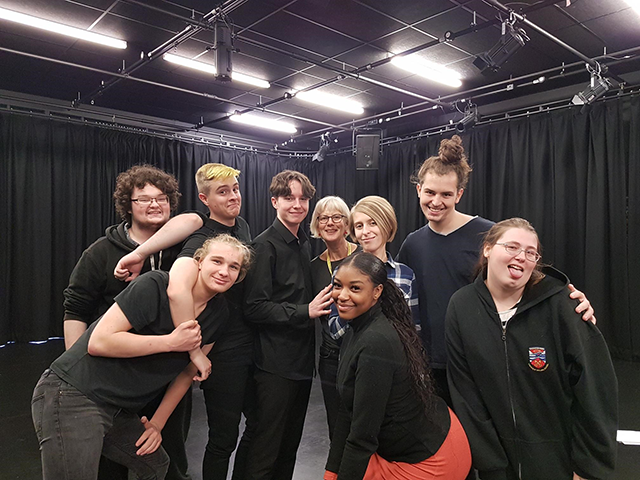 So, I don’t hang around. The students (between 17 and 19) respond well to an opening warm up where I give them a series of simple imagination exercises to help them think about and explore their characters physicality.

They’re quite restricted in their responses but not resistant and they found a good level of concentration and a willingness to explore. I try to push them to go further and some really take this on. They come up with excellent responses to my question as to how they might express the value and point of these exercises in a written form (as they’ll be required to do this as part of their curriculum. None, including Jenni, like this element of their course!)

I’m trying to notice if anyone stands out, but at this stage I’m just getting to know them and it’s too early to tell.

We move on to the text. I’ve chosen four short extracts, each aimed at focussing on two specific characters. They’re very open to questions and to trying things out in a new way and there are two or three real eureka moments and breakthroughs and some intelligent, articulate responses, which is gratifying. 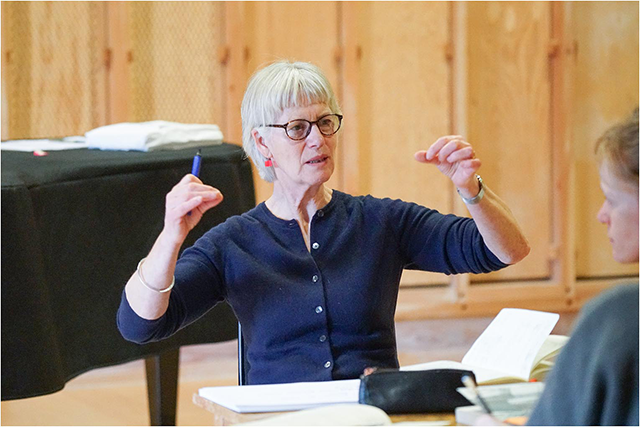 By now, I would pick out Lucy and Sid as showing particular qualities and promise and I think it’s certainly worth talking with their teacher about how we might encourage them further. Mollie is also worth mentioning. She really responded to direction and once she’d stopped ‘playing the comedy’ her Trinculo was genuinely original and funny and she was really interesting.

There’s a very informal but serious atmosphere in the room. Easy with a group of this size but I’m sure their open-ness and receptivity would not be so marked without the excellent relationship Jenni has clearly built up with them, and the respect she clearly has for her students.

I think we all enjoyed the experience – and would all have liked more time!

I was worried that this session would be just ‘doing a lesson’ for the teacher, but I think it was of real value having a practitioner asking and raising questions: opening a door into this extraordinary play and the process of acting a little wider. The students were really mature and thoughtful in their assessment of the morning had meant to them and I think each found their own moment of insight.

The DCF ‘Directors in Schools’ Scheme arranges for experienced directors to take workshops in under achieving state schools with the aim of stimulating interest in stage and screen culture, and the director’s role in it. Find out more on the DCF website.

Les Miserables, Paranorman and Pirates! fly the flag for British film at the Oscars