Nicolas Roeg: director, cinematographer, one of a kind 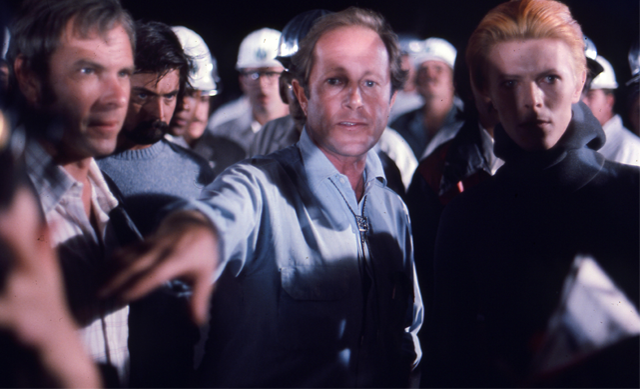 Directors UK was deeply saddened to hear of the death of Nicolas Roeg, one of our most distinguished directors. Nicolas was the director of such classic films as Don’t Look Now, Performance and The Man Who Fell to Earth. Director Piers Haggard shares his memories of this one of a kind filmmaker.

I first met Nic Roeg in late 1981 when he was one of a flurry of top directors who handed over their £100 cheques to help John Crome and me set up the Directors Guild of Great Britain, a new organisation that we were starting for all directors of stage and screen.

After a brilliant career as a cinematographer capped by Fahrenheit 451 with Francois Truffaut and Far from The Madding Crowd with John Schlesinger, Nic had made the move into directing, in a very original way, with Performance (1970), a vehicle for Mick Jagger full of dark twists. Unfortunately it was far too original for Warner Brothers, who held it back for two years – and then recut it. But with Walkabout (1971), the legendary Don’t Look Now (1973) and The Man Who Fell to Earth (1976), Nic Roeg had established himself as perhaps the most exciting British director on the scene.

So we were delighted when, like Alan Parker, Nic agreed to play his part in the new DGGB, joining the Committee that I formed, rather arbitrarily, with Fred Zinnemann as Honorary President. He wasn’t especially active but he did give us his next film Eureka (1983) for a screening, our very first. Interestingly, he didn’t fancy doing the Q&A himself, sending the writer Paul Mayersberg in his place. I suspect he sensed it hadn’t completely worked.

Nic was always up for taking an artistic risk. “I’ve never storyboarded anything. I like the idea of chance. What makes God laugh is people who make plans. If one does too much planning, you’re not seeing the gold beneath your feet.” Nic was continually trying to find new ways of telling a story. In Don’t Look Now and particularly in Bad Timing (1980), he had begun to bend the art of flashback and deconstructed narrative into ever more expressive shapes, exploring memories and guilt via some supremely creative and intricate editing, unequalled since in my view.

A year or two ago Victoria Morris, Directors UK Head of Communications, and I took Nic out to lunch hoping to persuade him to come and talk to members about his career. He wasn’t very keen, and when pressed finally muttered in his gravelly, officer-class twang, “I think I prefer doing things to talking about them”.

Nic hadn’t been to university and had no theoretical training, starting as a camera assistant at the studio across the road from his parents’ house. “It fascinates me now that film has become a university subject; I can’t believe it!”, he said once. Although he sometimes maintained film wasn’t an art, Nic was absolutely an artist, in both thought and demeanour. And he always had a great line in hats!

Nic had been one of those who spoke passionately for the creation of the DGGB on February 25 1982, at that epochal meeting at Ronnie Scott’s Club, along with Alan Parker, John Boorman, Karel Riesz, Lindsay Anderson, Christopher Morahan and a host of other luminaries of screen and stage, all saying to each other, ‘Isn’t this amazing! Why have we never done this before?’

These were pretty much the words used by a group of equally distinguished and disaffected directors when they met up in the Century Club in December 2005: ‘Isn’t it fantastic to get all these brilliant directors together in one room!’ they said. ‘Why have we never done it before?’ Well some of us had of course, over 30 years earlier, and before that when starting the ADP in 1973, but these things tend to get forgotten as the wheel of time turns. Now, with Directors UK going from strength to strength, a gathering of directors is not such a surprise – and I’m glad to say it wields a lot of power.

The DGGB eventually withered, because it had no power. This is why I want to urge all Directors UK members to sign the new Collection Agreement now, to give Directors UK the power it needs to negotiate toughly on your behalf with the digital channels and other new providers who currently don’t pay you any royalties. It’s time to take the next step and create another shift in the balance of power.

As a founder member of the directors’ movement that eventually became Directors UK, I am convinced Nic Roeg would be saying “Sign Up Now!”.