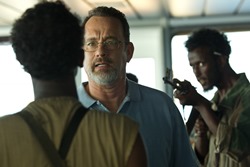 According to the BFI, "Captain Phillips is director Paul Greengrass’s multi-layered examination of the 2009 hijacking of the US container ship Maersk Alabama by a crew of Somali pirates. It is – through Greengrass’s distinctive lens – simultaneously a pulse-pounding thriller and a complex portrait of the myriad effects of globalisation."

The film is based upon Richard Phillips' "A Captain’s Duty: Somali Pirates, Navy SEALs, and Dangerous Days at Sea", with Phillips played by two-time Oscar winner Tom Hanks. Paul Greengrass is president of Directors UK.

You can watch a trailer for the film below.