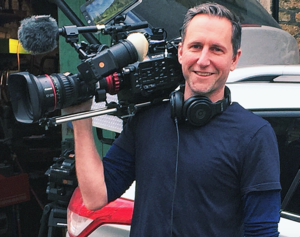 Previously John has worked on a diverse range of shows from World’s Weirdest Events (BBC2) to Escape To The Country (BBC1) to You Are What You Eat (C4). Other broadcasters include ITV, Channel 5, Extreme, Discovery, MTV, S4C & Sky Sports,

Through his company Movie Mogul, John devised, co-wrote and produced feature film ‘Panic Button’ in 2011, which world premiere'd at Film4 Frightfest, enjoyed a lengthy run on Sky Movies, was nominated for a Welsh BAFTA and sold to 26 territories around the world. Panic Button is currently on re-release on DVD & VOD in the UK. In 2014 John made his feature film directorial debut with the critically praised psychological thriller ‘The Sleeping Room’ which also received its world premiere at Film4 Frightfest and is now available on DVD and VOD in UK, US and Canada.