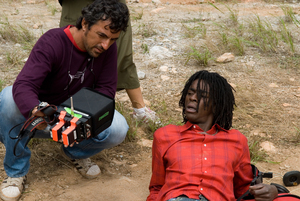 Born and raised in Brazil, of Italian descent, Murilo Pasta is a ‘Best Short’ BAFTA nominee with The Tale of the Rat that Wrote. He has directed for the BBC (Casualty, Grange Hill), Channel 4 (Brookside, Hollyoaks) and Sky (Dream Team). His debut feature as a writer-director, Carmo Hit the Road, was nominated for the Grand Jury Prize (World Cinema Dramatic Competition) at the 25th Sundance Film Festival and won the Audience Award at the 33rd Sao Paulo International Film Festival. Transit, an MTV Networks Europe feature production won Murilo ‘Best Popular Feature’ at the One World Media Awards and was shown on MTV worldwide on World Aids Day. He helmed the TV police drama series 9mm for Fox Latin America and has directed TV commercials in Brazil and Europe.
Still in the UK he wrote and directed a number of other shorts, including Future via Hope, winner of Channel 5’s ‘Visions’ contest – and nominated ‘Best Short’ at the British Advertising Craft Awards –, and Sniffers, which showed both commercially at UK cinemas and, sponsored by The British Council, at a host of festivals worldwide. His one and only foray into theatre, Hitchcockian noir drama Be Mine, was a smash hit both in Brazil and Portugal. Murilo has worked as a script doctor for the European Script Fund, and taught screenwriting at the London College of Communication, University of the Arts London and at Goldsmiths University. He recently wrote the comedy feature Jogos Clandestinos (AKA Backstreet Games) and was co-creator and showrunner on the crime drama TV series Natureza Morta (Still Life) for premium cable in Brazil. He holds a master’s degree in screenwriting from the London College of Communication, University of the Arts London and has recently completed both the Professional Program in TV Writing and the Professional Program in Screenwriting at University of California Los Angeles.
Read More