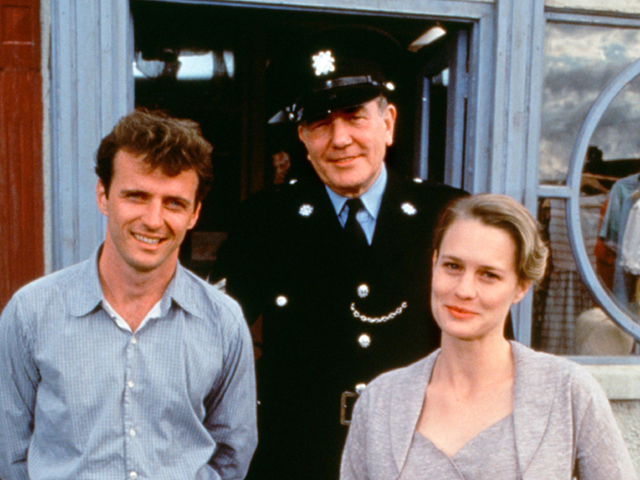 We were deeply saddened to hear of the recent passing of Albert Finney, who was not only an actor with a storied career, but also a Directors UK member, and the director of Charlie Bubbles and The Bilko Inquest.

The loss of Albert has been keenly felt around the industry, and particularly amongst our members. In this article, Directors UK member Gillies Mackinnon looks back on working with Albert on his feature film The Playboys.

I made a film in 1992 with Albert Finney  — The Playboys — written by Shane Connaughton and Kerry Crabbe, set in Cavan on the Irish border. It told a tale of traveling players who went from town to town performing Shakespeare and reconstructing famous films on-stage like Gone with the Wind. Albert’s co-stars were Robin Wright-Penn (as she was then known) and Aidan Quinn.

All of us who knew Albert feel sad to hear of his death and remember him fondly. He was, in the old school way, a true gentleman. He had an extraordinary ability to remember the names of everyone he encountered - not only the crew, but all the local people of Redhills who provided the film with extras and supported us in many other ways. We experienced him as a deeply social man, free of ego or any obvious vanity. When I asked him about doing the Irish accent he seemed relaxed — “I got away with it in Birmingham.”

On the completion of long night shoots, there was an event known as ‘Breakfast with Albert’, where he opened up the bar of the hotel where we stayed and provided drinks for all at four in the morning. At weekends we had parties with spontaneous jam sessions and Albert was there happily playing the spoons. One Saturday night he didn’t turn up and we let rip till dawn. As I was closing the curtains in the morning I looked into the car park and Albert was standing at the door of a large coach, welcoming crew members onboard. He had hired the coach for the day to treat the crew to a day at the races. When I woke up I opened the curtains in the late afternoon and he was there again, this time welcoming people off the bus upon their return. In many ways, he seemed at least as interested in race horses as he was in acting.

Albert was playing an alcoholic border policeman, on the wagon, (and falling off it), obsessed with catching smugglers, and even more obsessed with Robin Wright’s character, Tara. When we wrapped, the real-life local policeman, Sean, appeared as Albert was being presented with a crystal clock by the village. He arrested Albert for ‘Impersonating a police officer and drinking on duty’. Albert was bundled into a police car and taken away. The joke went a bit too far as he was about to be locked up in a real cell in Cavan police station when he finally strongly insisted upon being released.

When Albert appeared on set he routinely asked the script supervisor what time it was. When she said 9.30am, the crew were thrown, as the time was actually late afternoon. Of course, Albert was referring to the fictional time of his character. His character being a recovering alcoholic, the time of day mattered. If it was morning, the day was new; if midday or late afternoon it meant something else, if evening, something else again. He is the only actor I ever worked with who did this, but I often mention it to actors in a certain context.

I feel fortunate and honoured to have directed my first feature film with Albert. I learned a lot from him both professionally and personally, just by dint of working so closely. The Sunday before shooting began I was summoned to Albert’s hotel room. I didn’t know why and I have to admit it felt like going to see the headmaster. In the event, we had a nice cup of tea and he quietly assured me that on this, my first feature, there would be many problems I haven’t encountered before and he wanted me to know that he was on my side and if there was anything he could do to help, to let him know. The thing I remember about Albert is that he was ‘real’, didn’t have a false bone in his body. One night we were socialising and I guess he just forgot I was the director for a moment. We were talking about drama and he said thoughtfully — “You know how it is with these directors…. that’s all they do.” This had a dreadful ring of truth, and I have always remembered it and made sure to pursue other avenues parallel to making films.

WATCH NOW: A day in the life of a Multi-Camera director