Today Directors UK launches its new report on gender inequality among directors working in UK television. We reveal that despite the promise of action, the gender gap continues to widen...

In 2014, Directors UK issued its first ever report on female directorial representation in UK television production. It highlighted the chronic lack of women directing UK programming and the narrow range of subgenres they were getting the opportunity to direct.

Four years on and a number of industry equality and inclusion initiatives later, we wanted to understand just how much things have (or haven’t) changed.

In our new report – Who’s Calling the Shots? A Report on Gender Inequality Among Screen Directors Working in UK Television – we look at television output from 2013-2016 and reveal that the gender gap increased across all four of the main UK broadcasters: BBC, ITV, Channel 4 and Channel 5. This is despite the publication of goals, interventions, diversity and inclusion strategies, and the introduction of monitoring through Project Diamond (run by the Creative Diversity Network).

Channel 4 came out bottom with a 5.4 percentage point decline in the number of episodes directed by women, while Channel 5 saw a decrease of 2.9, and the BBC and ITV’s figures showed a drop of 1.8 and 1.5 respectively.

We also find that:

For more stats and information, please read the full report.

As a result of these findings, Directors UK is today calling on broadcasters to commit 0.25% of their commissioning spend across all programme making as a levy to fund industry access and career development schemes for underrepresented groups. And for broadcasters to monitor and publish the equality data of senior production roles, such as producers, writers and directors, as well as the heads of departments.

We’re also calling on Ofcom to make it mandatory for all UK broadcasters to report on diversity off-screen for freelancers as well as permanent staff. And to set in-front and behind-the-camera targets for broadcasters to use production crews whose gender, ethnic and disability makeup mirrors that of the UK population.

Read on to find out more about the report and our findings.

In our report we analyse the proportion of TV programmes directed by women across the four main UK broadcasters (BBC, ITV, Channel 4 and Channel 5) between 1 January 2013 and 31 December 2016. Our data encompasses 47,444 episodes directed by 4,388 individual directors.

You can find out more about the methodology on page 22 of the full report.

One of our most striking findings is that during the 2013-16 period the percentage of television episodes directed by women actually declined from 27.29% to 24.31%. While in the same period the percentage of episodes directed by men increased from 72.67% to 75.53% – in spite of all that has been said over the last few years about the need to address gender inequality in the industry. 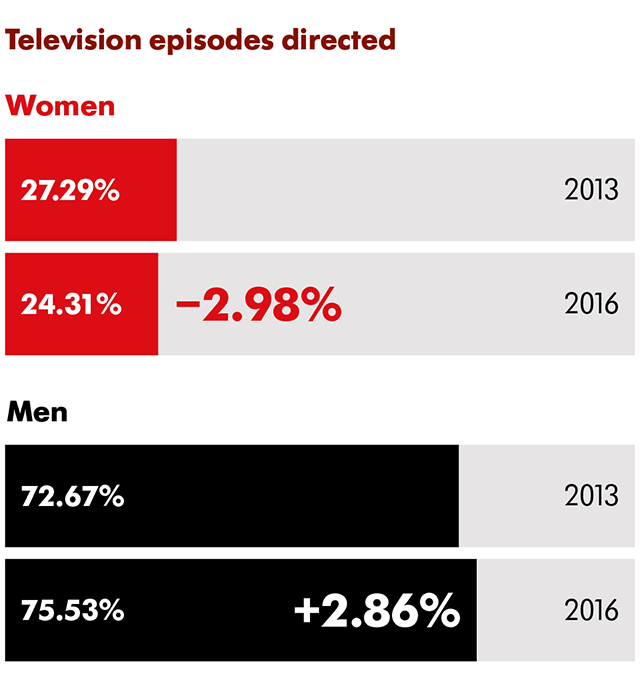 Furthermore, this disparity isn’t down to a lack of women directors present in the workforce, even as it currently stands; when you look at the number of actual working individuals in our dataset, 66.5% (2,916) were men and 33.1% (1,452) were women. So despite making up 33.1% of the workforce, on average only 25.03% of episodes in this period were actually directed by women. 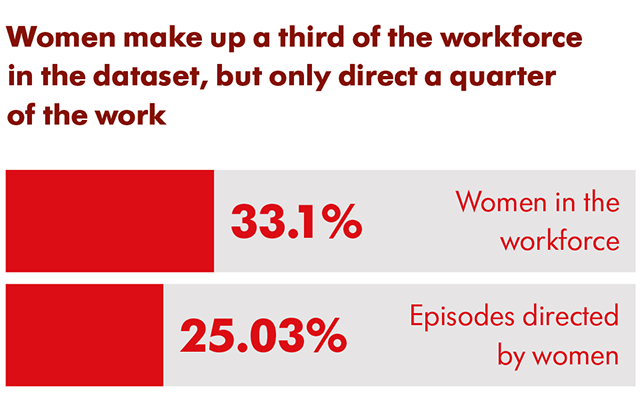 Then we move on to the broadcasters themselves. As you can see from the image below, none of the broadcasters managed to increase the percentage of their programming directed by women over the four-year period. This comes in spite of each of the broadcasters announcing a number of highly-publicised interventions and diversity and inclusion strategies during this period.

You can see what the broadcasters had to say about these findings below or on page 18 of the full report. 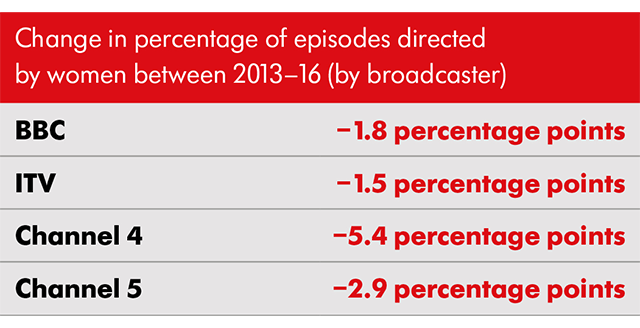 When we break the figures down by genre, we find cause for both disappointment and encouragement. 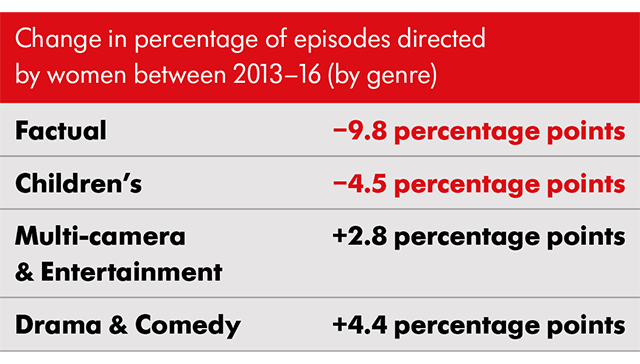 Factual saw a huge decline in the number of episodes directed by women – a drop of nearly ten percentage points. A closer look at the subgenres within factual presents a bleaker picture still: lifestyle entertainment and reality TV dropped a massive 13.5 percentage points, while constructed factual (shows like Made in Chelsea and The Only Way is Essex) was the only subgenre to show some moderate improvement (an increase of 3.1 percentage points).

Children’s television also saw another large drop in the number of episodes directed by women – a drop of 4.5 percentage points. The subgenres are again revealing, with children’s factual showing the biggest decline (-10.4 percentage points), mirroring the trend in adult programming. It’s troubling that in their formative years, children are being provided with such an unrepresentative authorial outlook behind their TV programmes.

There is some reason to be hopeful when we look at our other two main genre groupings: multi-camera and entertainment, and drama and comedy (however it should also be noted that despite these improvements, both genres still have an overall lower percentage of women than either factual or children’s).

Drama and comedy is the genre that saw the most improvement, with some particularly interesting findings when you dig into the figures for individual subgenres. Single drama – which encompasses some of the most prestigious programming on TV – saw a percentage point increase of 11.4. While continuing drama (or soaps) saw an increase of 7.3 – we explore why that might be in the Intervention section below.

Multi-camera and entertainment saw a smaller increase of 2.8 percentage points. That improvement was driven by significant increases in the percentage of women directing entertainment programmes and report/magazine shows.

Read all the stats including full breakdowns by subgenre and broadcaster in the full report. 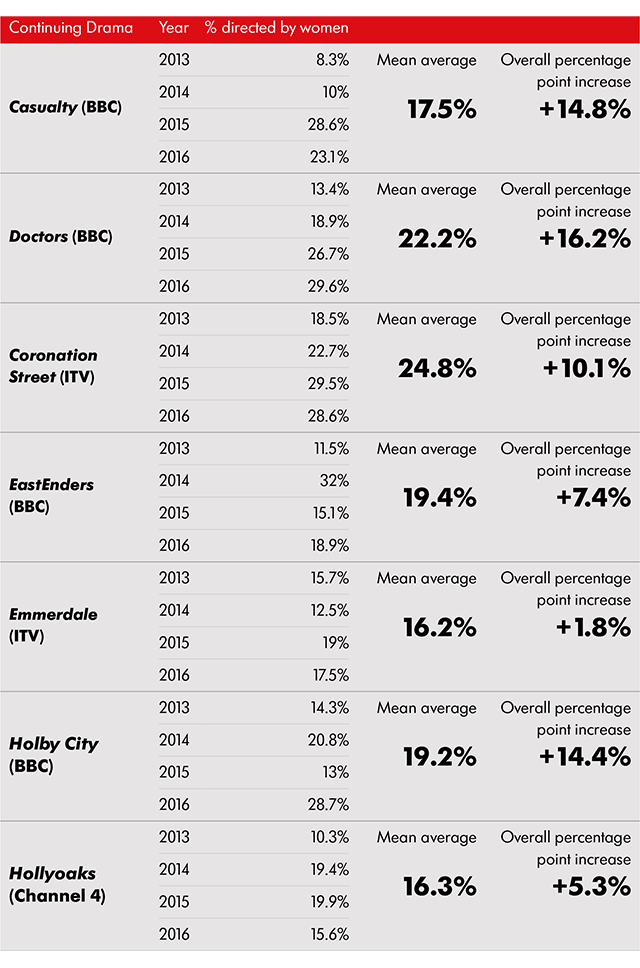 Until such interventions become common practice instead of the exception, a positive and long-lasting move towards equality will not happen. The figures show that schemes like the ones mentioned above work, and now they need to be replicated across other genres and programmes. This is why Directors UK is calling for a levy to fund investment in career access and development across all genres – see more about this in the Our Recommendations section below.

Read more about the interventions that have taken place in continuing drama on page 12 of the full report.

The response from the broadcasters

Prior to the publication of this report we sent our findings to the featured broadcasters, and they chose to respond to us through the Creative Diversity Network (CDN). Both the BBC and ITV pointed to their successful initiatives – such as the aforementioned Continuing Drama Directors’ Scheme and Multi-Camera Directing Workshop – while Channel 4 pointed out that in 2017 they “gave opportunities to 46 emerging diverse directors, exceeding our target of 40”. Channel 5/Viacom told us that “shows such as Bad Habits: Holy Orders and Circus Kids featured all-female production teams”, and that 2017 saw the publication of their diversity commissioning guidelines for independent production partners.

Deborah Williams, Executive Director of CDN, said: “Directors UK’s report is a good start and will, we hope, over time demonstrate how long-term data can provide rich insights. We look forward to the next three years of data being published by Directors UK which we hope will provide additional insights into our own data, which is growing steadily.”

Every broadcaster stated their commitment to promoting diversity and inclusion, but now we need these words to lead to results.

Read the broadcasters’ unabridged responses on page 18 of the full report. 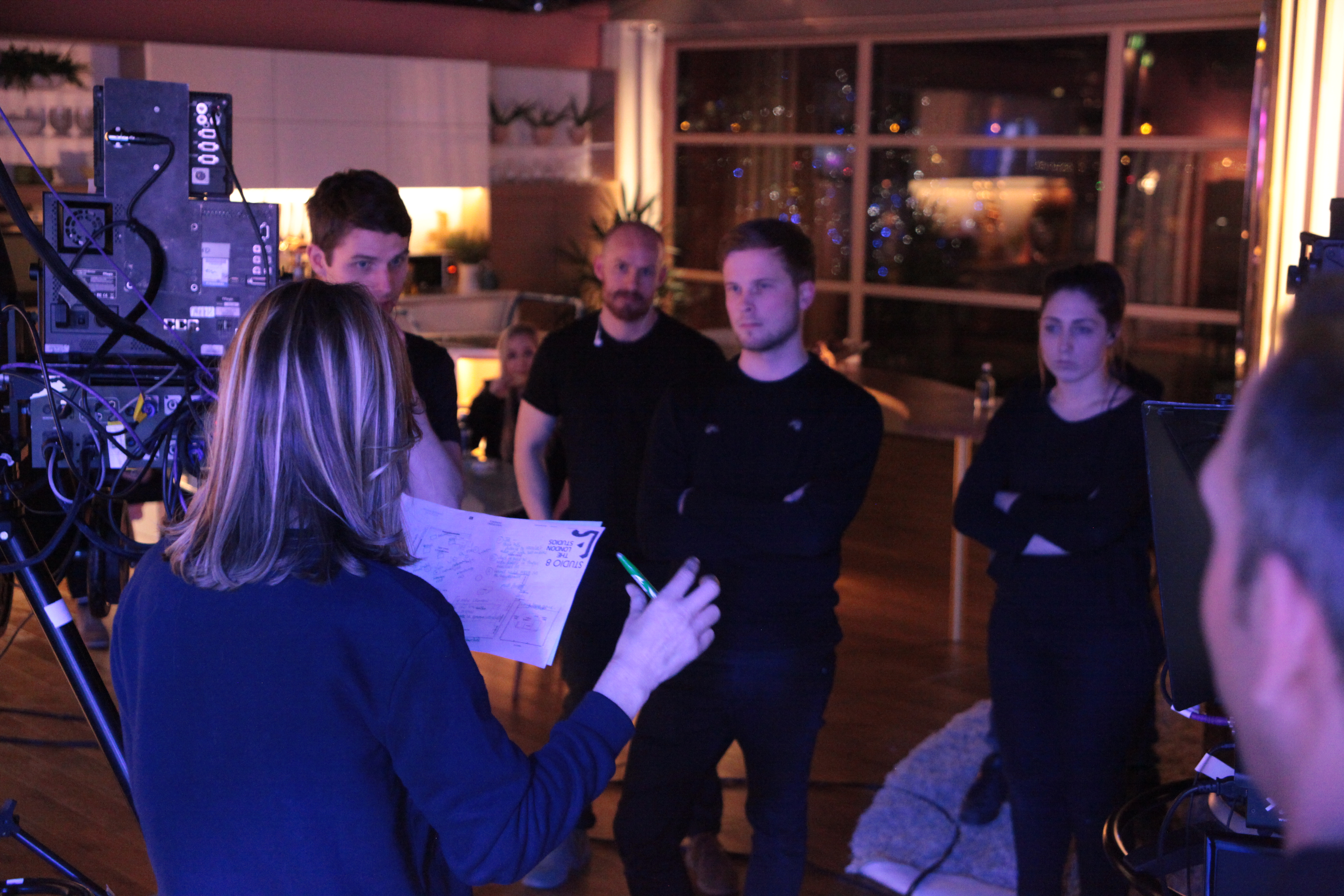 The aim of our report is not just to raise awareness but also to make suggestions that will bring about real change.

1. A new Ofcom requirement that calls on broadcasters to collect characteristic data for senior production roles

We are calling for Ofcom to make it a mandatory annual requirement for all UK broadcasters to monitor and publicly report on the diversity characteristics of all those making programmes for them. This reporting must include both permanent staff and freelancers. Existing diversity information currently collected by Ofcom does not contain comprehensive data surrounding freelance programme makers.

In particular, we would like to see broadcasters monitor and publish the equality data of senior production roles such as producers, writers and directors as well as the heads of departments.

This transparency will make broadcasters accountable for the effectiveness of their equality, diversity and inclusion actions and commissioning goals and identify areas of concern that can be positively addressed.

2. Require Ofcom to set targets for TV crews to reflect our population profile – 51% female by 2020

We call for Ofcom to set broadcasters targets to use production crews whose gender, ethnic and disability makeup mirrors that of the UK population, both in front of and behind the camera, by 2020.

Broadcasters should be required to show evidence of initiatives undertaken year on year to improve diversity and inclusion as well as presenting statistical results.

We call on broadcasters to take practical measures to improve the diversity of their programme makers and to build the following provisions into their commissioning contracts:

4. Require broadcasters to commit 0.25% of their commissioning spend to fund career development

We call on all broadcasters to commit 0.25% of their commissioning spend across all programme-making as a levy to fund industry access and career development schemes for under-represented groups. Currently only high-end drama and children’s programmes are part of industry training levies.

Find out more about our recommendations on page 21 of the full report.

In September 2017 Ofcom released their report, Diversity and Equal Opportunities in Television. In the foreword, Chief Executive Sharon White stated: “Television has the power to shape and represent our identities and values. To achieve that, broadcasters must reflect the society we live in ... research suggests they are falling short”.

Our report’s findings support this view. Clearly, the level of women working in key programme authorship roles is not high enough for television to properly reflect the gender breakdown of the nation. This report provides robust evidence to Ofcom and the broadcasters of the significant work that still needs to be done to redress inequality.