The Making of The Snare

Director C.A. Cooper has recently completed production on his first feature, The Snare. He originally pitched the idea for the film at a Directors UK Directors LAB event. He explains how the idea developed from there and the unusual and controversial methods he used to get the film made.

“I knew that from the second everyone arrived on location, on set, that I must not allow them to leave until the film was complete”

In May 2012, then 22, I took a feature film project to Cannes to pitch for finance. The project received mixed feedback, but what was clear was that at best the script could be sold but nobody would let me direct it because I was an unknown first time director.

I realised that I had to find a way to make a full length 90min feature film, that I could fund myself. I had to make it happen otherwise I’d have no credibility moving forwards and securing talent and finance for future projects. I first tested the pitch for The Snare at the Directors UK Directors Lab event and after it received a positive response I felt confident moving ahead.

The basic premise for the film has essentially remained the same, although ironically the one thing that has changed most since the initial pitch is how I would pitch it now. I hate pitching, but the thing that’s really stuck in my mind since the course was that pitching is just something you need to get used to; it's something a director has to do. I now just see it as an adaptable sales tool. For instance, I'd pitch to actors completely differently to how I'd pitch to a Sales Agent.

However the single most important school of thought that I remember adopting after the Director’s Lab was ensuring that I became absolutely hyper-aware of what I intend for an audience to both think and feel moment by moment, and to ensure that I communicate this every step of the way via the orchestration of every cinematic tool at my disposal. I combined this school of thought with a simple philosophy of my own: ‘Is it interesting? Is it believable? If not, what’s wrong with it?’ and that is essentially what led me through the creative process.

The Snare is a psychological horror about three students who head to the seafront for a drunken weekend, only to be imprisoned on the top floor of their holiday apartment by a malevolent paranormal force that proceeds to cut off their resources, manipulate, torture and starve them, ultimately driving them insane.

I knew from day one that it needed to be real in order to work and that I would have to strictly simulate the experience of being trapped on the top floor of a building for an extended period. This was necessary to push the actors to the extremes that were required to do the whole thing properly and in order to truly immerse audiences in what would be a fresh, raw and honest experience. To achieve this, certain things had to happen.

Firstly, I knew that from the second everyone arrived on location, on set, that I must not allow them to leave until the film was complete - and that is what I did.

Secondly, everything needed to be controlled, from their diets, to their sleep patterns, their hygiene, their down time, their mental health, and it was important that to an extent they were not aware of this manipulation.

Thirdly, I needed to convince them that the apartment was genuinely haunted, and this needed to all be rigged and prepped months in advance. If the paranormal elements of the film were to appear convincing then the actors would need to be fully convinced themselves, regardless of their backgrounds and belief systems.

Finally, everything needed to be shot in chronological order so that the physical and mental deterioration of the actors was consistent. The only exception to this would be the dream sequences and when make-up would need to be applied to dramatize key aesthetic elements.

We had a budget of £4000, 4 crew members (originally 5) and a 4 week period to shoot in the apartment. The whole thing was a covert operation as we had to keep it a secret from my girlfriend’s mother that we would be filming in her apartment as she would never have allowed it otherwise.

The £4000 budget was primarily spent on food and actors fees, so that they could take time off work to do the project. The crew were all paid as much as we could offer them. All the equipment had been accumulated by myself and my team over the years prior, so there was no additional expenditure required for anything technical. I ended up building a camera dolly with my dad using a combination of MDF, aluminium and skateboard wheels with garden tubing for tracks. We shot on a Canon 5D Mark ii and lit using a 4-pack of DLH4 Dedo Lights (150W) and a couple of red heads. One dream sequence was shot on a Black Magic, as I felt it would benefit from a few extra stops of dynamic range and I really wanted to push that sequence much further in the grade. 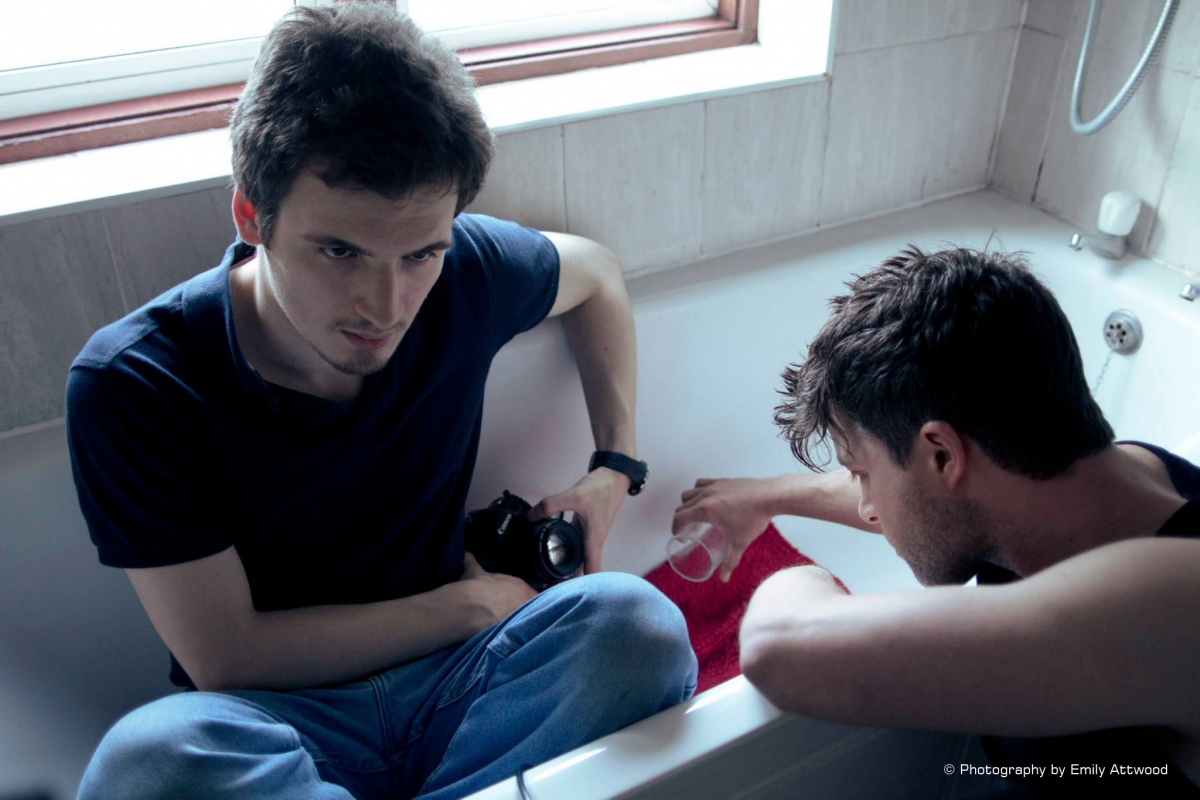 In March 2013 we arrived on set and began shooting the first scene. Disaster struck immediately when I came to the realisation that the cinematographer was not up to the job and could not perform at the standard I required. I was going to write off the whole project but noticed the gaffer, Tom Butler playing with a Rubik's Cube. I asked him to solve it in under 1 minute. He did. I was then confident that he could apply the logic and problem solving necessary for the job.

However, Butler’s expertise was in lighting and he lacked the experience required to operate the camera. Subsequently I took on the camera operator role myself, although I was doubtful at the time that I would be able to direct actors and operate simultaneously. Although we only had 4 weeks, the shooting process was very slow as I like to shoot a lot of takes to fully explore and rigorously exhaust each scene, so that maximum potential can be hit and reaped moment by moment. We hit 39 takes on the second day on the shot of Alice in the kitchen that features in the trailer, where she looks over her shoulder at the closing door.

As the weeks went on the shoot descended further and further into chaos and madness. I often found myself having to take drastic measures to retain order, for instance if the mood was too light on set I would line up the actors and instruct them to ingest cold lumpy soup directly out of a tin until they felt nauseous. However, techniques such as this became less necessary over time, when the actors started to become genuinely affected by the environment.

As for the paranormal, I had doors rigged to slam shut and had made adjustments to the electrics enabling me to black out rooms discreetly and cause lights to flicker on cue. Several times I had the crew secretly wreck the actor’s bedrooms and turn their suitcases upside down. The actors would then have to spend hours tidying everything up, only to have it happen again and again. By the end of it they were literally losing their minds and turning on each other.

One of the most horrific scenes to shoot for Eaoifa Forward was a sequence from the latter half of the film where she eats a live spider - largely due to the fact that she was arachnophobic. I had a bottle of Listerine and a bucket on standby. With great difficulty she managed to go through with it, placing the spider into her mouth, but when I called cut it refused to come out, trying to climb its way down the back of her throat. She ran across the set screaming, nearly pulling down the lighting rig.

As for the special effects shots, such as the violence and gore, the make-up artist Jo-Barrass-Short, understood that we were on a budget and put forward an assortment of ingenious and cost-effective solutions. For instance, Lizzy’s intestines were created by filling up condoms with squashed bananas and her head in the final scene was replaced by a watermelon in a cheap blonde wig. 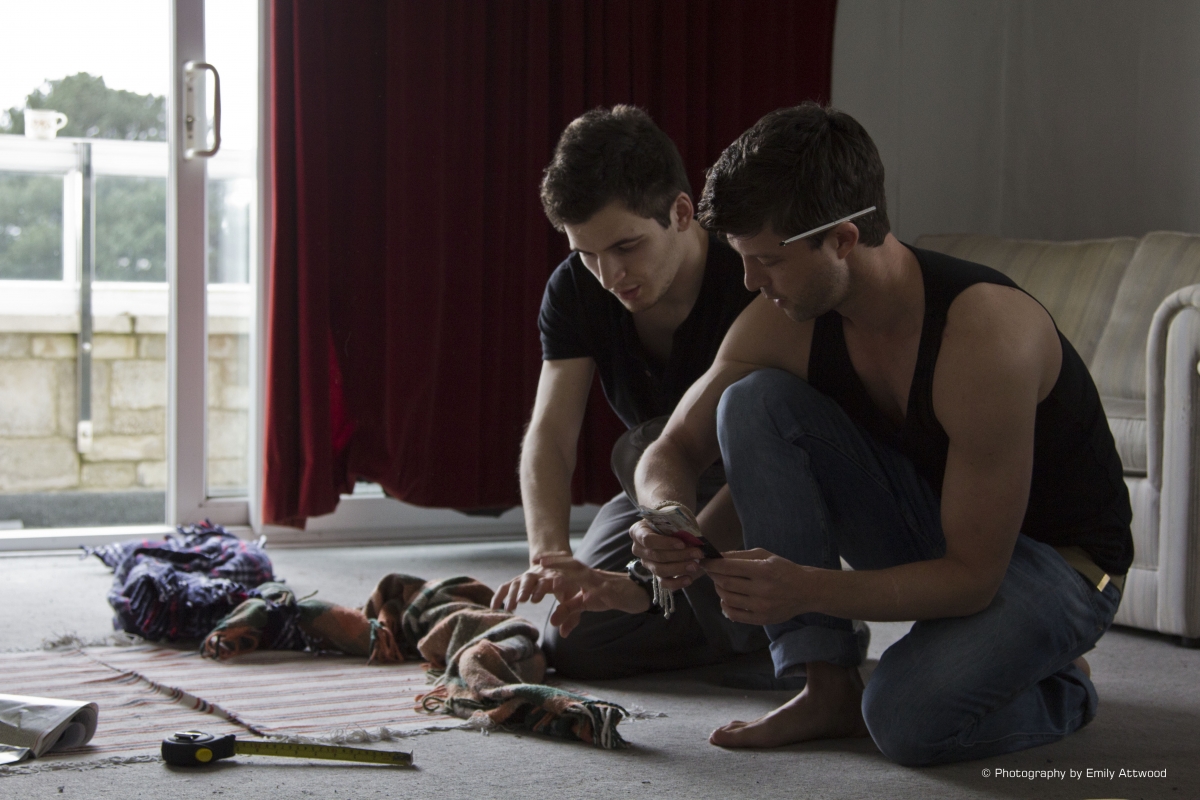 We shot several of the lighter dream scenes in the summer on the odd weekend here and there, and then entered post-production in September. This lasted for 10 months. I'd originally intended to edit the film myself, but seriously fearing for my mental health I decided to bring on board a VFX supervisor to work as the editor. I knew that he was intelligent, well-read, cinema literate and the kind of person who would be brutally honest throughout every step of the process regardless of the circumstances, knowing that any comment he made would be insensitive, hurtful and rude. This was exactly the type of person I needed.

The edit process was explosive, gruelling and highly taxing in every conceivably sense. At the lowest point, my delirium, anxiety and paranoia had built to such an extreme that I thought the editor had poisoned our evening dinner in an attempt to kill us both and rid us from having to spend one more second working on the film. In turn, I think he also believed I was planning to murder him and then myself.

The most difficult part of the post-production process was recording Foley and sound effects due to the non-existent budget. Unable to afford access to a recording studio, I created a sound proof igloo in my bedroom from layers of bed mattresses. I sat in the igloo every day usually working from 22:00 at night to 03:00 in the morning for a 6 month period, recording the sounds for all the prop interaction, cloth movements and footsteps that are heard in the film. This ritual had to be performed naked, particularly in the recent summer months as the heat was unbearable and I could not open any windows or use a fan as it would wreck the recording. I also had to hold my breath, often for minutes at a time to avoid breathing on the mic.

We’re now coming to the end of the process and are preparing to secure a 20k investment to pay for the final audio mix, deliverables, expensive documentation and any legal fees associated with distribution and sales. The theory was always that we could make the film on £4000, and if it was good enough and received sales interest, then we’d have the credibility to secure any further investment required to finish it so it could be handed over.