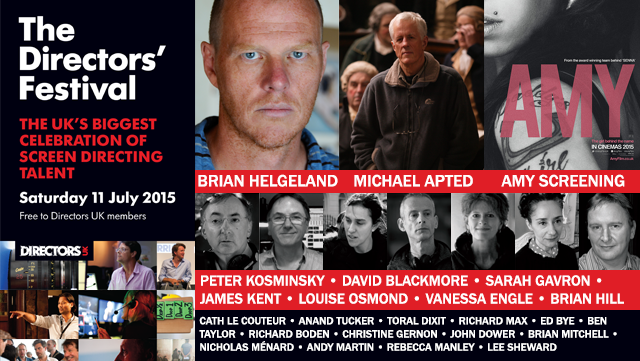 We're delighted to announce that our final keynote speaker at the Directors' Festival 2015 will be award-winning writer-director Brian Helgeland.

He has also directed a number of his own scripts, including A Knight's Tale, Payback, The Sin Eater and 42. His next film will be Legend, the highly anticipated London-set gangster film starring Tom Hardy as both of the infamous Kray twins.

Brian will be addressing the Directors' Festival attendees and then speaking to film critic Jason Solomons.

Over 250 directors are already signed up but it's not too late for Directors UK members to get a ticket! Tickets are free and are available until Thursday 9 July.

Brian Helgeland's keynote speech joins all the other great sessions and speakers we've already announced. See below for the full programme details.

The award-winning film and television director Michael Apted will be delivering the first of our keynote speeches at The Directors' Festival 2015.

Michael Apted has had a long and prolific career, directing documentaries, television drama, and feature films for over fifty years, as well as serving three terms as President of the Directors Guild of America and now serving as Secretary/Treasurer. Among his documentaries are the landmark Up Series and the Grammy-winning Bring on the Night. His movies include Agatha, Coalminer's Daughter, Gorillas in the Mist, the Bond film The World is Not Enough, Enigma, Amazing Grace and The Chronicles of Narnia: The Voyage of the Dawn Treader. He's had a similarly distinguished career in television, all the way from Coronation Street in 1963 up to Rome and Masters of Sex in recent years. He is currently in post-production on the independent spy thriller, Unlocked.

If you've got any questions you'd like us to put to Michael, please comment below or on the Director's Festival Facebook page. Don't forget to click 'join' while you're there, and let us and your director friends know that you're coming.

Sarah Gavron, director of the highly-anticipated Suffragette, will be talking to Testament of Youth director James Kent. They'll be discussing how they brought their modern historical stories to the big screen. Moderated by Piers Haggard.

Wolf Hall director Peter Kosminsky and editor David Blackmore have enjoyed a long-standing and fruitful collaboration. Come and hear how to get the best out of these important creative partnerships. Moderated by Beryl Richards.

The Art of Interviews

Award-winning documentary directors Louise Osmond (Dark Horse, Richard III: The King in the Car Park), Vanessa Engle (Money, Inside Harley Street) and Brian Hill (The Not Dead, Climate of Change, The Secret History of Our Streets) discuss how to get the best out of interviews and contributors. Sponsored by ARRI.

How do you make comed lift off the page and raise the roof? Ed Bye (Red Dwarf, Vicious, The Vicar of Dibley), Ben Taylor (Catastrophe, Cockroaches), and Richard Boden (Blackadder, The IT Crowd) discuss how to make funny even funnier with moderator Christine Gernon (Gavin & Stacey, Up the Women, Grandma's House).

New Kit in Close Up

John Dower introduces Brian Mitchell from the MoCap Academy, as he demonstrates how to use motion capture in action. Sponsored by Audiomotion.

From Eastenders to Casualty, from Mission: Impossible to 007 - Stunt Co-Ordinator and Second Unit Director Lee Sheward will be showing us how to get more bang (sometimes literally) for your buck. Introduced by Philippa Collie Cousins.

Join Directors UK's Digital Manager Ash Mann and learn how to enhance your public profile through your online activity - and why you should do so! Have your phones ready...

Hear from leading UK and US directors as they share personal insights and industry expertise. Take part in sessions, workshops and demonstrations that will help you raise your creative game. Share peer-to-peer learning, tips and techniques in a day that puts you at the heart of the programme.