Hand sanitizer, bespoke masks and lockdown haircuts: go behind the scenes of Alone Together and watch the finished film

When lockdown rules came into place, Directors UK member Luke Bradford (2nd Unit, Marcella Season 3) had just moved into a new house with no furniture, and life seemed to have completely changed. The perfect time, in other words, to make a short film.

Below, Luke outlines how he used COVID-19 production guidelines to make his new short, Alone Together, starring Joanne Bradford and Jordan Mifsud. From pre-production through to post, read about the logistical and creative challenges that presented themselves — and the crafty solutions needed to complete filming. 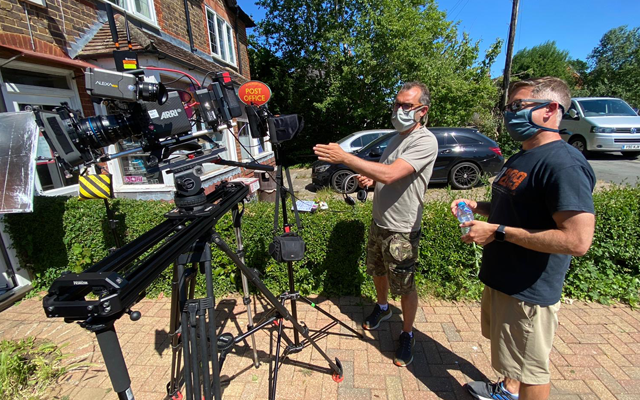 Like for so many of the creatives in our industry, when the pandemic hit, everything stopped. My wife and I had just moved to a new house in Guildford the day lockdown started. With no furniture, a mattress on the ﬂoor and every room in the house needing decorating, all aspects of our life seemed upside down. After the ﬁrst month passed, being an independent ﬁlmmaker, I started to look at what I had around me and wondered if I could put it to use. My wife is an actress, I’m a director and editor, we have a set in the form of a run-down shell of a house and a bunch of shorts I’ve made that I could steal clips from. A plan began to hatch.

I decided to make a short ﬁlm as an exercise to see what was possible following government and industry production guidelines. A few well-funded lockdown productions from various broadcasters began surfacing, which was encouraging to see. These relied heavily on Zoom content and phone cameras, so I wanted to avoid those elements as much as possible. 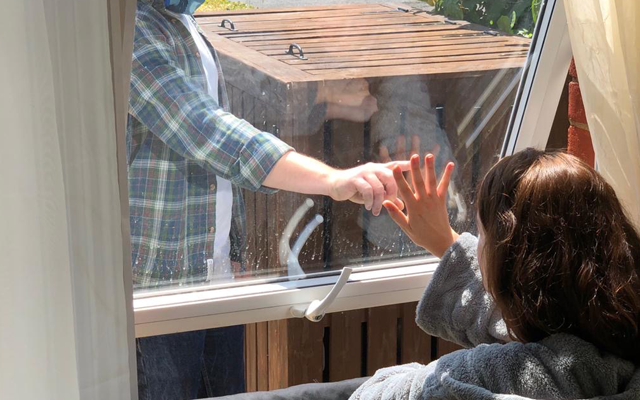 Numerous people had been writing about how ﬁght scenes or intimate scenes between couples would be impossible given the coronavirus restrictions. So I set about tackling one of those challenges to see what creative solutions I could ﬁnd. New production guidelines started to trickle through as I wrote the script. It was clear this wasn’t going to be easy — but what independent, self-funded ﬁlm ever is?

I landed on the following story; Alone Together: A couple torn apart by the loss of their unborn child. Sara is now in a new home and is having to self-isolate while her husband Greg — an NHS nurse — is on the front line, ﬁghting the pandemic. When Greg drops off Sara’s belongings, isolation creates an unlikely setting for a breakthrough.

Re-edited footage from two previous shorts of mine featuring my wife pregnant would create a dream sequence/backstory, leaving a two-hander, shot in one day at our house in the front room and driveway. The bay window would act as our PPE between the actors, with the whole scene played out through the glass. Normally that would feel weird, but by making the barrier part of the storyline it would hopefully make sense.

I was keen to shoot on an ARRI Alexa Mini, I love the camera which feels like a reliable friend on set. I reached out to a talented core production team that I felt would be the absolute bare minimum to capture this story. I proposed the collaboration and the positive uptake was inspiring from DOP Scott Milton (White Gold) and Operator Mark Moreve (2nd Unit DOP, new Netﬂix drama currently in production). Mark generously supplied the full ARRI kit and lighting, of which he has a lot! Art Director Casey Williams (Killing Eve Series 3) looked after the set via FaceTime. I ﬁlled in the gaps. Pre-production was two weeks which was a busy period but there is nothing like lockdown and effectively living on set to get things done! Rehearsals between the actors Jordan Mifsud (Kingsman: The Golden Circle) and Joanne Bradford (Pusher) took place via Zoom, which worked surprisingly well given the physical distance. 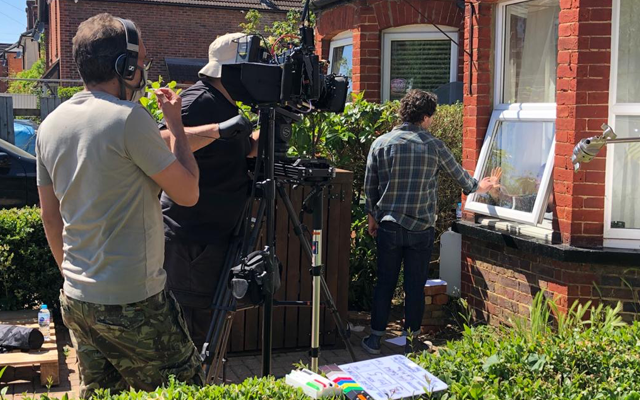 With just three crew including myself on set sporting lockdown haircuts, it had become clear that the lack of production support was going to highlight how crucial all those roles are. Before shooting, the crew members rightly raised some important observations. These included emphasising that the lack of other key production members should not be the new norm and that, whilst this was an interesting creative exercise, it was not an endorsement of rushing back to work. Safety should be put ahead of schedules and budgets.

With my producer’s hat on, insurance was a key topic. Fortunately, my production company Frogspawn Film’s existing insurance fully covered the shoot, despite the lockdown restrictions. Safety and following the various production guidelines was at the top of the exercise agenda. I supplied each crew and cast member handmade bespoke masks from StichNsip on Etsy. There were hand sanitisers in every room, latex gloves and lots of outdoor space to ensure social distancing. Catering was pre-prepared offsite and individually wrapped wherever possible. The three crew and two cast members conﬁrmed they were feeling well with no COVID symptoms and everyone signed the extensive risk assessment that detailed the ofﬁcial guidelines. 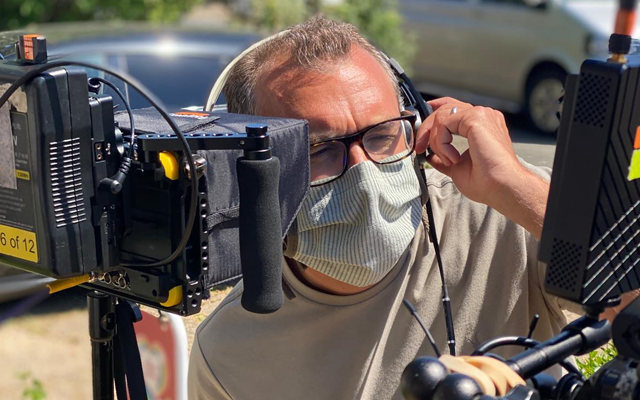 As with any professional shoot, it was well prepped and scheduled to the minute. This was even more crucial when the crew was so stretched. Whilst being creative with the approach, I deliberately tried to keep things as simple as possible for obvious reasons. Everyone wore many hats (and masks) on the day and sure enough, the lack of production support made for an intense day full of rapid decisions and constant compromise.

The hardest part of the guidelines to follow was, unsurprisingly, the social distancing. The ofﬁcial advice is: ‘to stay 2m apart where possible and where not possible, to minimise time spent in close proximity and observe PPE guidelines’.  The bay window provided excellent protection between the actors. For their singles, we shot through the glass so the actor on the same side of the crew was facing away from each other, another tick on the guidelines. In reality, in the same way as when you go to Tesco or walk down the high street, you inevitably come closer than 2m at some point, even just for a moment. It is simply unavoidable.

The biggest challenge for me as a director was that I also played the role of 1st AD, producer, sound operator and runner. It was like regressing to the days of a student production when a set isn’t crewed up accordingly. The bandwidth for ‘directing’ is severely impacted. But everyone rose to the challenge; the actors’ performances were inspiring and we ﬁnished inside a standard 10-hour day. The simpliﬁcation of set-ups and a focus solely on solid performances was actually refreshing for me, as my attention is often on designing more complex shots. 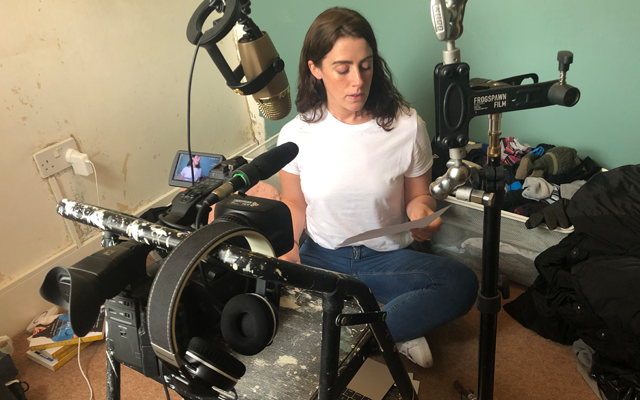 With this being a lockdown story, the delivery of the ﬁnished ﬁlm was time sensitive. As an editor, I was conﬁdent we had the material we needed. However, I was concerned about the audio as I had no soundman and we shot next to a relatively busy road. With this in mind, I tried to make the noise of the road add to the emotional stress in the scene. That’s an arty way of me saying ‘there is lots of trafﬁc noise for us to deal with’.

Part of the exercise was re-editing some existing footage I had from previous short ﬁlms with the same actors. I made these part of a dream sequence so any difference in look only added to the surreal ‘dream’ feel. These clips, which only make up 8% of the ﬁnal duration, help add some production value and a visual break from the single location. 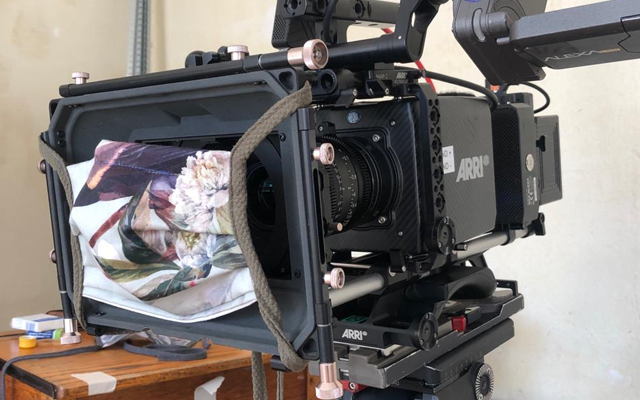 As more people in the industry started to hear about our exercise, I had some very timely and exceptionally kind offers of support. Sound mixer Tom Povey at The Farm reached out and offered to look after the mix. The Farm is the UK’s largest post facility, offering picture and 5.1 & Dolby Atmos services to productions, so we were instantly in safe hands there! I recorded the foley we needed myself, which wasn’t hard to organise as I live with the actress and at the location we shot in.

I was then introduced to colorist Harry Conquest who has graded hundreds of episodes of drama including the brilliant After Life series. Harry very kindly offered to grade our ﬁlm remotely. I would normally sit in on the grade but for obvious reasons we worked remotely via Frame.io.

Composer Michael J McEvoy wrote some music over his weekend despite being knee deep in scoring a 6-part HBO series. As usual, he nailed the perfect vibe and fast.

The production timeline from ‘shall we make a ﬁlm’ to uploading to Vimeo was ﬁve weeks and cost £90. My last short, for which I won funding, took well over a year and cost £40K, so I was staggered at what we managed to achieve with so little time and budget. This efﬁciency was largely down to the generosity of everyone involved in the collaboration as well as the simplicity of the story.

My conclusion from the exercise is as follows: Yes it is possible to shoot something of quality in lockdown not solely on phones and Zoom, but it is immensely stressful and no substitute for having all the required crew on set. We inevitably had to compromise in many areas. I don’t think it would be sustainable over more than two or three days of shooting.

Just before shooting, Art Director Casey Williams summed it up well with this comment, “It looks great and it will look lovely when it’s done, but it would look quite different if I’d been able to do it myself”. I feel this sentiment would be echoed by other crew members not present in pre-production and production stages.

The COVID-19 guidelines are possible to follow but some are a time killer and will undoubtedly impact scheduling. I would say a dedicated COVID-19 crew member is highly recommended to take the pressure off ADs, runners or producers. Based on my experience of this shoot, this is a crucial new role.

Making ‘Alone Together’ exist has been a tough but ultimately heartwarming experience, collaborating with such talented and willing crew. The camaraderie at such a depressing time for the industry lifted our spirits and we are pleased to have risen to the challenge.

Films normally can’t get away with having some ‘excuse copy’ on screen outlining why the ﬁlm was challenging to make. Ours does, it’s at the start!

The story has had an incredible response so far with numerous parents who have tragically lost their unborn child. One wrote: ‘Wow...That was amazing, powerful, moving and heart breaking all at once. We lost our daughter in February and her funeral was just before lockdown. The film is a thoughtful reminder that we all grieve differently’.

Everyone involved would be honoured for you to watch our short, Alone Together.

Watch Alone Together below.