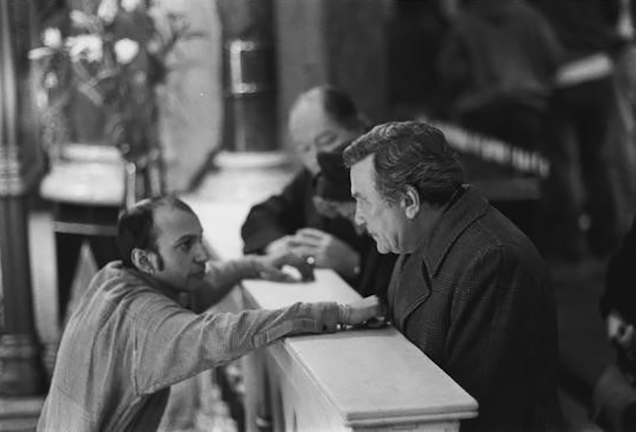 We were saddened to hear of the passing of Albert Finney, a legendary actor and Directors UK member.

Albert is revered for his powerhouse performances, produced over a long and starry career — but he also enjoyed a couple of turns behind the camera, as the director of Charlie Bubbles and The Bilko Inquest.

When news broke of Albert’s passing, the impact was felt throughout the industry, and not least among our membership. In this article, Directors UK member Suri Krishnamma remembers working with Albert on his debut feature, A Man of No Importance.

I first met Albert in 1993 in a tiny office just off Regent Street when I was looking for the lead in my debut feature, A Man of No Importance. Albert’s name had entered the frame late in the process because the character was originally written for a much younger man, but when he showed an interest it was as if a light-bulb exploded in my head. The producer (Jonathan Cavendish) and I quickly realised that our film, set in 1960s Dublin about a man going through an internal struggle of sexual identity, could be even more interesting if it was played by an older man, and in my opinion there was no greater actor suitable for the role than Albert Finney.

The complexities of his character were that, in a way, he had to play three different roles. He had to play the private life of Alfie Byrne in his private world; then he had his public character, the one he shows to the tightly-knit community around him that won’t reveal all the deep secrets hidden in his private world; and the third was Oscar Wilde himself, Alfie’s literary hero and inspiration, and whose persecution he feels his own life is running parallel with. Finding the balance between those three was a complex process, and for a young director, an exciting one to observe and engage with. We often discussed how to balance these three aspects of the character, and scene by scene we would mark to what extent he would show Alfie’s private or public side, and to what extent his Wilde side. But when it came to delivering the beautifully measured performance, all this work seemed to have been absorbed into Albert’s body as if it were always there, his nuanced portrayal now seeming effortless and intuitive.

It came to shooting one particular scene, that actually, I think, is my favourite scene in the whole film. It’s a single shot, just him, looking into his dressing table mirror in his bedroom. He’s quoting from Oscar Wilde’s De Profundis: “If I can produce only one beautiful work of art I shall be able to rob malice of its venom, and cowardice of its sneer, and to pluck out the tongue of scorn by the roots. And if life be, as it surely is, a problem to me, I am no less a problem to life.” And that’s basically the scene. But during it, the camera tracks around his head as he combs his hair, shifting his side-parting to the centre of his head, effecting the transformation from Alfie Byrne to Oscar Wilde. It was a much more complicated scene to get right than it might appear on the screen, and for me the pivotal scene in the film as we finally understand the true nature of this gentle and innocent man.

I found him one day, it might have been the first day of shooting, strolling up and down on the street during a break, fully dressed in his Dublin bus conductor’s outfit from the 1960s, a period before payment cards when paper tickets for travel were issued by mechanical hand-wound ticket machines carried by the conductor in exchange for a strange thing called cash. All our props and costumes were authentic, often sourced from local museums, and we used real period Irish coins, of course – pennies with a Celtic harp on one side. Albert quickly grew fond of his ticket machine and leather coin pouch. He’d walk up to me and say, ‘listen to this, Suri’ as he ran his fingers through the coins, a childlike excitement beaming across his face. Then he’d bring his hands out and sniff them, telling me, ‘you can’t show this in your film, Suri, but I know it’s there’ he’d say, grinning, referring to the smell the old coins had left on his chubby fingers.

Such details were important to Albert, as were other discoveries made while researching, so that he could fully immerse himself in his role. I watched as he peeled away and discarded the layers of Albert Finney that he didn’t need, like stripping the bark from a tree, until he was left with the core of stuff that might be useful for his character, Alfie Byrne, to have. Critical to what was left was the childlike innocence that was the defining features of Alfie as well as his working-class roots and connections to his community. Some of these things were skills – such as operating a ticket machine so that it became an unconscious process, or learning how to keep his balance while standing on a bus that twists and turns, bumping its way around the cobbled Dublin streets. On our first day shooting the bus sequences I found him standing with his back pressed against one of the many chrome seat rests. ‘Look’ he said, ‘I’ve got to park one buttock on either side of the rail. That’s how they keep their balance’ he added, grinning, excited that he’d learned the secret of a bus conductor’s ability to remain stable while both hands were being used to issue tickets.

We finished shooting A Man of No Importance on the 9th May, 1993, Albert’s birthday, and I took him out for a farewell lunch the following day, the 10th May, my birthday. As a gift, I gave him his beloved ticket machine from the museum and had it engraved. He opened the box, looked at it and said, ‘my machine’ with a child-like joy in his face. He then looked up and said ‘it’s very hard sometimes to say things…’ his eyes now filling with tears.

Albert always found it difficult to watch himself on screen, indeed once told me that he hadn’t seen many of the movies he had starred in, but however sad his parting, he has left the gift of his great screen performances to be seen for future generations to come.

What’s it really like being on the Directors UK Board?