We say thank you to our longstanding Chair Steve Smith, whose term in office came to an end at last week’s AGM.

Steve Smith is a BAFTA award-winning multi-camera and entertainment director. He has directed some of the UK’s most popular TV programmes, including The Graham Norton Show, A League of Their Own, Gordon Ramsay’s The F Word and Big Brother.

As one of the industry’s most experienced multi-camera directors, Steve was co-opted on to the Directors UK Board in 2014 to represent directors working in that area. He was then duly elected chair of the Entertainment and Multi-Camera Committee in 2015, before becoming overall Vice-chair of the Board under Beryl Richards. 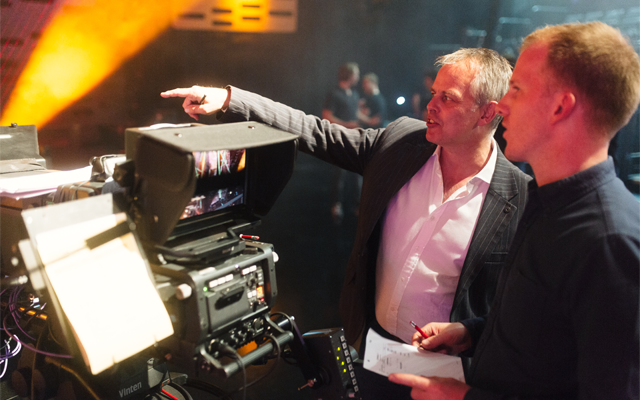 Steve became Chair of the Directors UK Board in 2017 and went on to serve in that role for over four years.

In his time as Chair, Steve has been a dedicated champion of directors and Directors UK. He has lead the way in guiding our campaign work, he has helped us secure better deals for directors in our negotiations with the broadcasters, and has been actively involved in our lobbying activity. Steve has taken a hands-on approach to developing the careers of younger directors – he has mentored other directors and helped design and run the successful Directors UK Multi-Camera Directing Skills for TV scheme. He has also served as the public face of Directors UK, appearing on panels and giving interviews on TV and radio, in order to tell the world about our latest work.

Steve is a passionate environmentalist, working as a sustainable production consultant and as a BAFTA Albert Ambassador promoting sustainability within the television industry. He has brought that mission to bear on Directors UK as well, securing training opportunities, organising events and writing articles on this important subject. He has also worked with the staff team to ensure that Directors UK is itself environmentally conscious as an organisation.

After seven years on the Board, Steve has now served the maximum number of terms allowed under our regulations, and so has to stand down from both the Board and as Chair. He makes way for a new Board of directors, as elected by our members, who will continue the work that Steve and the rest of the Board have done to fight for the rights and recognition of our members.

In his speech at his final AGM as Chair, Steve said: “It has been an enormous pleasure to serve on the Board. There is no question that Directors UK is a prominent voice in the film and TV industry, and that, together, we can really make a difference to the working lives of our members.

“It’s been a real privilege to represent the interests of directors for the past seven years and I’m grateful to the enormous support I’ve enjoyed from the membership, staff and fellow board members. One of the aspects I’ve most appreciated is being part of a collective of directors – who have always been so generous with their time and experience, working tirelessly to make the industry a fairer and better place for all directors.”

Directors UK CEO Andy Harrower said: “Steve has been a brilliant Chair of Directors UK – driven yet considered, politically astute, always open to new ideas and always challenging the status quo to create a better world for his director colleagues. We have been lucky to have him as Chair, with his thirty years of directing experience to draw upon, and I’m sure we will continue to work closely with Steve in the coming years.”

Read a thank you to message to our outgoing Board.