During this time, Andrew has overseen the organisation’s transition from a royalties collection society to a fully-fledged professional association for screen directors in the UK. Since 2010, membership has grown from 4,000 to over 7,500 members – the vast majority of working directors in the UK – and Directors UK now offers members a full range of benefits and services, from events to legal support, and from training to career development opportunities.

Andrew has fought tirelessly for freelance creatives to be fairly remunerated, lobbying in Europe to update copyright legislation for the digital age and negotiating with broadcasters and production companies to ensure TV and film directors are fairly paid for their work and protected in the workplace.

An expert in industrial negotiations, Andrew has secured long overdue pay increases for groups of freelance directors, established a creative rights agreement for film directors and grown the amount of UK TV royalties that are allocated and distributed to freelance directors from £3 million to £12 million a year. Andrew has also recently been leading negotiations with SVoDs and digital platforms to ensure that directors are fairly compensated for the use of their work in an increasingly on-demand world.

Under Andrew’s stewardship, Directors UK has become a significant campaigning body, publishing ground-breaking, evidence-driven reports that are helping the industry to develop solutions that improve opportunities for under-represented groups. Directors UK also proactively responded to the #MeToo movement, developing both a bullying and harassment code of practice for directors that is considered industry best practice by the European Commission, and guidelines for directing scenes involving nudity and simulated sex, which was the first of its kind in the world.

Previously, as the COO and Director of Business Affairs for Pact, the trade association for the UK’s independent TV production companies, Andrew negotiated the new terms of trade with broadcasters, giving independent production companies the rights to their own productions. Andrew also worked at ITV, starting as a production accountant in 1978 and leaving 23 years later as Commercial Director of ITV2. He was noted for negotiating the first independent commissioning arrangements at the ITV Network Centre, helping to secure the TV rights to Formula 1 motor racing and playing a significant role in the move into digital television, serving as project director for the launch of ITV2 in 1998.

Andrew’s commitment to the industry, and those who work in it, is second to none. Alongside sitting on the advisory board of the British Film Commission and being a member of the UK screen sector task force set up by the BFI to advise on Brexit, he has also been on the working groups of various industry bodies, including BSAC, ERA, CRM, CISAC, SAA and FERA. Andrew has never failed to represent directors, their craft, their rights and their concerns both in the UK and on an international stage.

Directors UK Chair, Steve Smith said: “It’s been an enormous pleasure and privilege to have worked closely alongside Andrew for the past five years. He’s been a brilliant Chief Executive and is so highly respected and admired by everyone he works with – from our team, our Board and our members, to the broadcasters, regulators, politicians and producers that he negotiates with. It is because of Andrew’s work that directors have a strong and powerful voice in the industry. He is a formidable, yet charming, negotiator and a confident optimist who always sees an opportunity to effect positive change in any challenging situation. I want to thank Andrew for his outstanding leadership over the past decade, and for the role he has played in transforming Directors UK into the highly respected organisation it is today.”

We are delighted to confirm that Andrew’s commitment to the industry and his relationship with directors will continue, as he has recently taken up the role of Chair of the Trustees of the Directors Charitable Foundation.

Following Andrew’s retirement from the organisation this week, incoming Directors UK CEO Andy Harrower will take up his position on Monday 4 May. 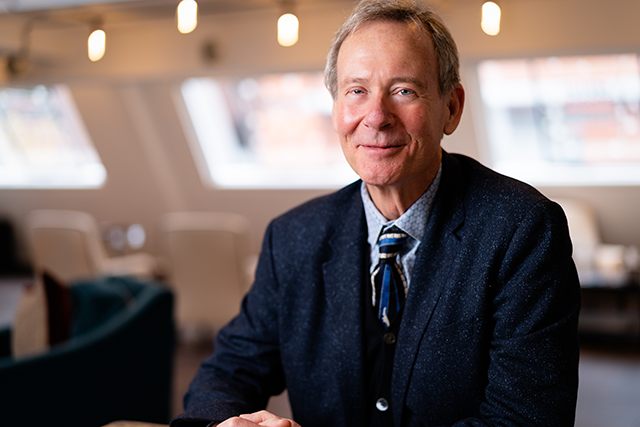