Directors UK bids a fond farewell to outgoing Directors UK Chair, Charles Sturridge. Charles has been Chair of the board here since we officially launched in 2008, having previously been chair of the DPRS before it. Having served three terms in office Charles has decided to step down as Chair to concentrate on a number of new director projects.

During this time he has overseen the transformation of Directors UK from a Collective Management Organisation into a full campaigning membership organisation, working hard to ensure that TV and film directors are properly represented and supported in their careers - both creatively and economically.

Charles reflects below on his time as Chair, followed by a few personal tributes to Charles from current Board members.

Under our 2011 constitution a chair is permitted to serve three terms in office, as I first joined the DPRS Board in 2006, became chair of DPRS in 2007 and was then first elected as chair Directors UK from its official launch in 2008 I feel that it is time for me to move forward.

It has been a genuinely remarkable privilege to be present at the founding of this organisation and to see it grow both in economic strength and ambition. Ten years ago I sat with a group of directors in a West London bar, we knew each other's work but not each other. We were used to fighting for our own careers but we had no voice in the direction of our industry which was even then undergoing rapid change. A month ago I attended a meeting which included DUK Members, representatives of Equity, the PMA, the MU, and WGGB formulating a creative response to the current BBC Charter Renewal plans. The fact that the meeting took place in the DUK office and was chaired by Andrew as DUK CEO seemed not only natural and proper but in every sense was a sign of how Directors have moved to the centre of the creative stage.

As I intend to be director for many years to come my interests in the rights of directors is not in any danger of diminishing, but I think that an evolving organisation is the key to creating a powerful and long lasting one and it is with great confidence that I hand over my responsibilities to the newly elected Chair Beryl Richards whose brilliant work for the Women's Group has been an inspiration to us all.

The next few months may prove to be among the most crucial in our history: we are on the point of signing the ITV Creative agreement, we will be announcing a new film agreement with PACT, we will be presenting our co-ordinated response to the BBC Charter Renewal initiatives and recognising the work of Edit Directors. We are also in ongoing discussions over Director's pay and finally are negotiating a new agreement with UK Broadcasters on the value of Directors Subsidiary Rights. This last negotiation is a crucial one and one that may test the resolve of every member but in a fast changing industry it is vital that we participate fairly in the value of our work when it is reused in other markets and on other media.

Directors are individuals and we all have our own path to walk, however the work of the last decade has shown that there are some crucial benefits that can only be achieved if we stand together. But all of this is only possible if we are truly representing you and are properly supporting your ambitions whether you are an experienced or emerging talent. Sustaining Directors careers economically and creatively is the key to our mission.

There are Board elections this year and we need new members to stand as well as more members to involve themselves in the work of the committees including: Fiction, Factual, Film, and Entertainment/Multi-Camera. Over the decade the Creative Industries have become increasingly crucial to the economies of the world and as authors we are entering a period of great opportunity but we need to make ensure we are vigorously and powerfully represented in what will prove to be the next decisive decade.

It is impossible to thank all the very many directors whose energy and intelligence have proved crucial over this period but I feel I must mention Paul Greengrass, Peter Kosminsky, Simon Berthon, James Hawes, Paul Unwin, Mary McMurray, Susanna White, Ursula McFarlane, Tom Hooper, Tim Sullivan, Richard Spence and Peter Nicholson - all past board members who gave exceptional amounts of time to make this work and of course Vice Chairs Beryl Richards and Tom Roberts.

Since I became a rookie board member just over a year ago, Charles has been an encouraging and supportive Chair, taking the time to make me feel welcome. He is a passionate speaker and campaigner for director's rights. I will miss his involvement and input in meetings and I admire and thank him for all that he has done for directors through Directors UK. In short, I am proud to know him.

I first met Charles at a lunch given by Anthony Jones at his rather amazing house in the country. I was new and nervous. Fresh from the NFTS and a BAFTA for a short film. Not used to the world of agents, directors and actors. Dizzied by the alternate praise or snubs at the pre-lunch drinks. I was horrified to find out that I was sitting next to him. I was in awe of him as this famous Director who had made “Brideshead Revisited”; the only Drama that we had religiously watched as a family in my teenage years. Charles was extraordinary kind to this little mouse of a girl. This is the first quality that I really value about Charles. Not only is he warm and decent but he is kind.

When I joined the Board of Director UK as a much more confident woman, he hadn’t changed. In fact, more of his qualities surfaced.

His experience, light touch, intelligence and irreverence were key at guiding the meetings through the agenda smoothly and with grace. Always listening, statesman-like in disagreement, he helped us accomplish more. The board under his leadership has achieved so much. Charles is always prepared and is wonderfully emotionally intelligent at reading the room. He is curious and open to learn and we have all been inspired by this low-key but effective style.

Charles will undoubtedly be snapped up by other boards; it is their good fortune. However, he is a loyal person, so should we ever need his good stewardship and advice I would hazard a guess that he will be there for Directors UK.

Charles Sturridge - I love that man!! I've seen in close-up how he's poured his heart, energy and savvy mind into Directors UK, how he's made huge gains for directors, and energised so many of us as a result. He also has extremely nice glasses.

Charles has been a remarkable chair of Director's UK. He has given so much for so long working tirelessly with skill, sensitivity and plenty of laughter along the way. He leaves us with an unrepayable debt of gratitude.

I first me Charles 35 years ago when I arrived, still in my short trousers, at Granada TV. Despite Charles, in the middle of shooting Brideshead Revisited, having practically super star status, he offered me friendship and advice with his characteristic charm and humility.

It has been one of the real pleasures of working with DUK as chair of the film committee that I have been able to pick up and strengthen that friendship and benefit again from his generous support.

Thank you Charles, and warm best wishes to you.

If you'd like to leave your own message to Charles, please do so in the comments below or email us at [email protected]. 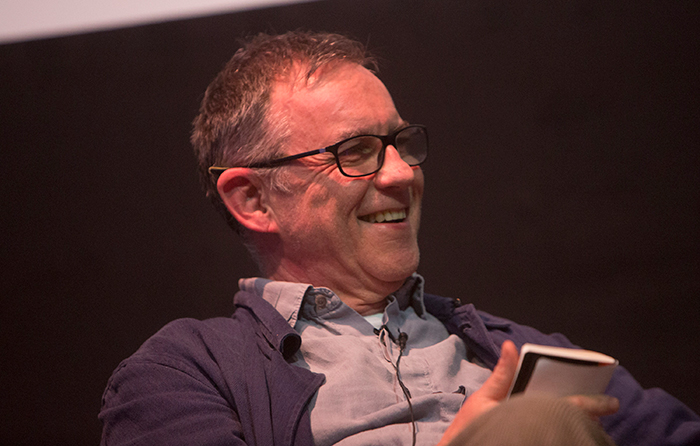