Challenge TRINITY 2019: What happened next?

Last year the first ever Challenge TRINITY-winning films were completed, and premiered at special screenings in London. We caught up with their directors to see what the TRINITY experience has meant to them in the months since.

Challenge TRINITY gives Directors UK members the chance to get their hands on an ARRI TRINITY holding an ALEXA Mini LF, and the opportunity to team up with experienced, top-notch TRINITY operators to make a film...in one shot. Below you can read the thoughts of directors Diego Barraza (The Letter), Martin Gooch (A Midwinter Night’s Dream) Emily Carlton and Daphne Schmon (Exit to Stage), Luke Bradford (One), George Milton (A Bullet Wasted) and Isabel Anderton (The Yearning) about the journey they and their films have been on over the past year.

I have been using the film in addition to my showreel whilst looking for work and new projects, and once we finish the tour, we will look at licensing the film out. Challenge TRINITY has led to some great opportunities: The voice over of the film was done by Dave Vanian, lead singer of The Damned, who had a sell-out concert ‘Night of a Thousand Vampires’ at the palladium in November which I filmed - and I might be working with him on a future project.

We screened The Yearning with the other TRINITY shorts at Encounters Film Festival in Bristol and Camerimage in Torun, Poland, which were both great experiences. We’re also screening on the Clermont Ferrand Film Festival online portal.  The Yearning is more of a teaser than a stand-alone short film so we haven’t pushed the festival route as much. It is working really well as a showcase for my feature script, The Tentmaster’s Daughter.

We have been using The Yearning as a calling card, and it was part of our successful application for BFI Development Funding. Our one-shot is very useful for giving future collaborators a taster for the look and feel of the feature project and Circus location, and producer Christine Hartland is including it as part of a package for the Feature to interest sales agents and potential funders.

I am shooting a music video soon that is an exterior one-shot and I will use the ARRI Alexa Mini with the TRINITY. They will be perfect. The knowledge and skills I gained from shooting The Yearning (and how the film turned out) definitely pushed me to pitch a one-shot for this video!

I mostly work in short form commercial formats, so I haven’t been using the film as a calling card for those purposes – but I’m developing some movie ideas and will use the film to help get these projects going.

I loved using the TRINITY, and although it’s expensive, I’ve hired it on a two jobs since making the short, both times with our short’s TRINITY Operator, Dominic Jackson. It’s a wonderful tool for directing certain sequences, particularly for the long take, and I aim to use it a lot in the future.

The year since Challenge TRINITY has been a wonderful journey for the film. Besides doing some very interesting events and screenings with Directors UK and ARRI like the BSC expo, Encounters Film Festival and Camerimage, The Letter has played at some international dance specific festivals like Dance Film Festival Prague, La Danza 1 Minuto-Turin, Dance on Film, Graz, Austria.

It was exciting to see some images of our film were used in the ARRI signature primes showreel. We’re very happy with the film we created with the help of Challenge TRINITY package, so we are very proud to show our work as a calling card.

We would like to use the TRINITY for the follow-up of the long form project featuring our main talent Andrè, with a creative documentary treatment integrating narrative dance choreographies and traditional docu-coverage. We’ve applied for some development funding from the BFI to help make that happen. 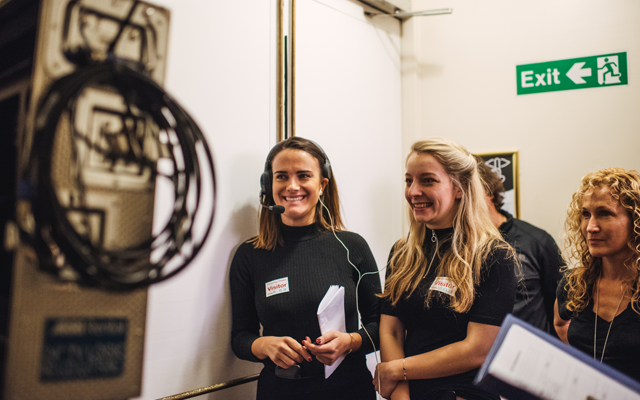 i>On the set of Exit to Stage. Photo: Rachel Manns.

Exit to Stage has played at a number of Festivals, including Underwire, Canada Shorts and the London Independent Film Awards – winning awards at the last two. We’ve been really pleased with the reception the film has received: when you make something like this, to such a targeted brief, it’s reassuring to know that the film stands up in its own right. Experiences like Encounters Film Festival and Camerimage, which we attended through Challenge TRINITY, have also been a really useful way of interacting with audiences. We’re interested in getting the film out there on other platforms – it has a useful message about women working in the arts that we want to find not just a wide viewership but also the right one.

We’ve been using the film as a calling card, not just for the work itself but for how we work together as directors. TRINITY was a great example of the way we can make things work together, and it wasn’t just a great opportunity to use some amazing equipment - it was really useful for expanding our network in terms of cast and crew. We met some terrific people that we can’t wait to work with again, and we know from our experience working on the film that they’ll bring the right dynamic to set.

It’s one of three shorts I’ve made since 2018 and is very much used as a calling card. People love the one-take theme, particularly given the popularity of 1917 which my TRINITY Operator — Charlie Rizek — shot.

I’ve been able to implement a lot of the skills I picked up from Challenge TRINITY over the past year: I shot several scenes of Marcella season 3 for ITV and Netflix (2020) in one take. I was 2nd unit director across five episodes and was given a huge amount of creative freedom. I really enjoy the creative blocking one-take scenes demand.

Looking ahead, I’ll continue to show it wherever I can. The film had an incredible response online with 20,000 views on Vimeo and was particularly well received in addiction recovery circles. One recovering alcoholic wrote, ‘Anyone who doesn’t understand addiction needs to see this, it’s pure genius. I’m going to watch it every morning to help me stay sober’. That was incredible feedback, to think the film is helping people feels like a tremendous accomplishment for everyone involved.

PODCAST + TRANSCRIPT: Another Round — Thomas Vinterberg in conversation with Paolo Sorrentino