Will Jewell and Dan Zeff on mentoring with Directors UK Inspire 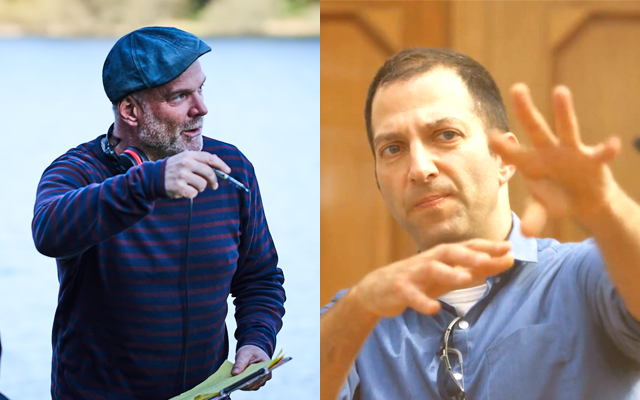 We spoke to Will and Dan about how they structured their sessions and meet-ups, how they gained from each other’s experiences, and what they think makes a good mentoring partnership. Read our interview below.

Why did you decide to get involved with Directors UK Inspire?

Will Jewell: I come from indie film, I’ve done animation and I’ve written for TV – but I’ve never actually directed for TV. I spent five years or so making my feature, Concrete Plans, and wanted to use that as a springboard for getting into TV, which always struck me as a little more stable than the rollercoaster of film. So that was my objective, and I was looking for a mentor who was really experienced in TV directing to give me some pointers into that world.

Dan Zeff: For me, I’d been on the Directors UK Board and had always been aware of the scheme. I’m also a trustee of the Directors Charitable Foundation, which is involved in many things - but a lot of it is about directors connecting. Through that and my involvement with Directors UK, I’ve always thought it’s great to get directors talking to each other and learning from each other. Mentoring on Inspire felt like a great way to get involved with other directors.

So how did you both connect initially?

Will: When I applied for Inspire I needed to select who I ideally wanted to be mentored by, and I put Dan’s name down. I came from music into film, and the first time I went to a short film showcase Dan’s short Dual Balls was showing – and it got stuck in my mind. Later, I was directing a web series with Holli Dempsey, and she was about to go into Ice Cream Girls with Dan – and I loved his work on Ice Cream Girls, and Inside No. 9, so I always kept an eye out for what he was working on. So, when I had to pick someone, it seemed like fate.

Dan: It was great that the application was targeted in that way. I could see immediately that there was a connection with our interests in comedy and drama, as well as in terms of artistic temperament and what we wanted to do.

How did the mentorship take shape - did you set out some objectives to begin with?

Will: We did set out objectives, but COVID had other ideas. We intended to meet in person regularly, but in the end it was largely a lot of Zoom calls – but we still had several clear goals. For example, around that time, I was changing representation, so it was useful to get a perspective on changing agents. I also wanted to get a feel for the landscape of TV. Getting an insight into the players and protocols, having that industry person to provide insight was invaluable during the isolation of lockdown.

Dan: It wasn’t that I could open magic doors, it was just about having someone to bounce off and provide with the benefit of my experience. I think one of the benefits of lockdown was that it meant we organised what were effectively two-hour “workshops”, each with a different focus - such as working with actors, or sharing our writing. And everything was very much shared: I was sharing my experiences but learning from Will, too.

Did you manage to meet, or do any mentoring in person?

Will: Eventually we did also do some shadowing on the set of Gangsta Granny Strikes Again, which Dan is directing. It was really interesting having that coming towards the end of the mentorship, because it meant that everything we’d been talking about was put into practise. It’s useful to see how another director works. The worlds of indie film and TV are so different. In indie film, so much time is spent in development and attempting to gain some financing, that you seem to spend a smaller proportion of your time on set. So, to get the opportunity to be with Dan and see how he works in that world — the dynamics, the interactions — was fascinating. Dan runs a really calm, efficient set.

Dan: Any two directors would direct a scene differently, so it’s always fascinating to see how other directors work. I think seeing other people work is a great way to refresh your own style. It’s also a demystifying process - Will already had plenty of experience, it was just a case of witnessing the differing nuances that come with the TV environment.

Is it fair to say that this was quite a reciprocal mentorship, and that you learned from each other’s careers?

Dan: Definitely. I’d not done much teaching, and Will was very generous in telling me more about the kinds of things he does teaching film. Indie film, of course, was another thing I really wanted to know more about. It was my first passion when I started out directing, and it was great to hear from Will about his experiences of it. It felt like a very symbiotic relationship. Will’s a really experienced director, and getting another director’s perspective is so valuable.

Will: Also with things like trading script notes, I really enjoyed that sense of collaboration. Directing can be a solitary occupation – even more so during lockdown - so it’s great to have that sounding board when I’m planning my next career move in TV.

What do you think makes a good mentoring partnership?

Dan: I think mutual respect is really key, and that would be true whatever the level of experience. Also, that ability to make sure it’s not just a one-way thing, to make sure it’s an exchange of ideas. It’s about sharing and collaboration, which I would say makes good directors, as well as good partnerships.

Will: Agreed. I’ve always liked Dan’s work, and wanted to learn from him. You’ve got to hit it off and want to learn from each other - every day’s a school day after all. Granted, I support Brighton and Dan supports Chelsea, so there’s been a bit of friction there…

What advice would you give to someone looking to get involved with Directors UK Inspire, either as a mentee or as a mentor?

Will: Go for it. It’s such a rare chance to see how another director works. You can use it to help assemble your own best practice from everything you soak up.

Dan: I think doing your homework in who you want to partner can be really helpful too. Will targeting his application to me, with a clear sense of what he wanted out of it, allowed us to really structure it and make sure we had targeted areas that we knew we wanted to discuss. From the mentor’s point of view: be willing to put a bit of time into it, and you will learn plenty from it yourself.

What are you working on at the moment, and what’s coming up next for you?

Dan: I’m continuing my work with the Directors Charitable Foundation. We’re looking to expand the educational side of what we do, and I’m hoping to do more webinars and continue to add to our offering in the mental health arena that I’m involved with – where we’ve already got some fantastic resources, such as discounted therapy for directors. In terms of directing, I’m working on Gangsta Granny Strikes Again, which is a lot of fun for the family and will be out to watch around Christmas.

Will: We’re looking to push Concrete Plans out to some more territories, and I have a sci-fi(ish) pilot and series bible with a great production company. I’m also working on a new feature based on a short of mine called Man in Fear, which was about conceptual artists creating accidents as works of art. All that, and using the advice I got from Dan to work on a move into TV!

The deadline for applications to Directors UK Inspire is Friday 18 November. Find out more and apply.

Find out more about the Directors Charitable Foundation — including their dedicated Director Support Hub.

Concrete Plans is available to watch in the UK on Amazon, Apple TV, Sky Cinema, NowTV and more — click here for links to viewing platforms.