Directors UK Inspire: shadowing on the set of Then Barbara Met Alan

Starting out with meetings over Zoom, Sasha would eventually go on to shadow Bruce on the set of the hit BBC film Then Barbara Met Alan — co-directed by Amit Sharma.

We spoke to Sasha about her experiences with Directors UK Inspire below. 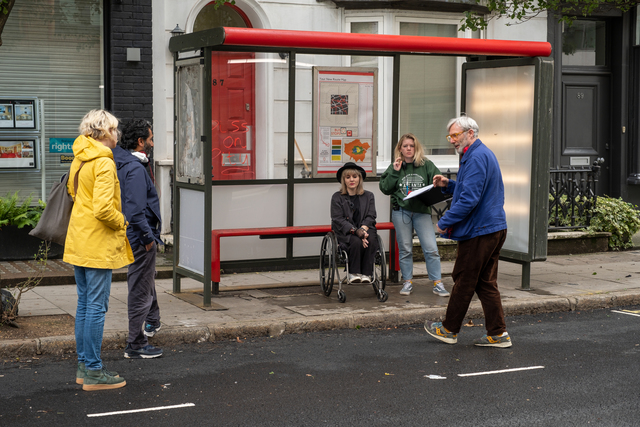 Tell us a bit about yourself and your directing career.

I'm a multi-award winning observational documentary maker. I've been producing and directing films for UK and international broadcasters since 2005. Some of my films have tackled challenging subject matters: mothers with addiction issues (Addicted: Last Chance Mums, BBC1), high-security prisons (Welcome to Belmarsh with Ross Kemp, ITV), drug wars in the UK, USA and Afghanistan (Our Drugs War, Channel 4), and life and death at a neurosurgery ward (Brain Doctors, BBC2) amongst others.

I have also explored more light-hearted topics, such as growing up in remote parts of Scotland (My New Best Friend, BBC Four), a behind-the-scenes look inside a famous store (Liberty of London, Channel 4) and a woman balancing detective work with motherhood (Married to the Job, ITV).

Alongside this work I have made my own independent film, Playing the Fool, shot over three years in a mental health hospital, which premiered at HotDocs in Toronto and Zagreb Dox Festival in 2012.

Why did you think the time was right for you to apply for Directors UK Inspire?

There were some stories that I couldn't tell as documentaries, so I was looking into ways of how to move into drama. In that sense, Directors UK Inspire scheme came at the perfect time for me.

Why did you decide upon Bruce as a mentor, and how did you first reach out to him?

There are a few documentary directors that have already successfully made that transition into drama, and Bruce Goodison is one of them. I have followed his work for some time now and I really appreciate the subject matters of his films. His independent film Leave to Remain is very close to my heart as I came to the UK as a refugee from Yugoslavia, Bosnia, Sarajevo back in the 90’s. I feel that his dramas have a documentary heart. So I simply emailed Bruce and asked him to be my mentor.

What sort of structure did your mentoring sessions take at first?

As we were in the lockdown, our meetings were Zoom. During our first meeting, we discussed my idea and worked out our meeting plan. To start with, our development meeting was every other week. Between the meetings, I would work on the development of my story, and when we met, we would discuss things and I would get Bruce’s invaluable advice and feedback. It was hard and it was fun. 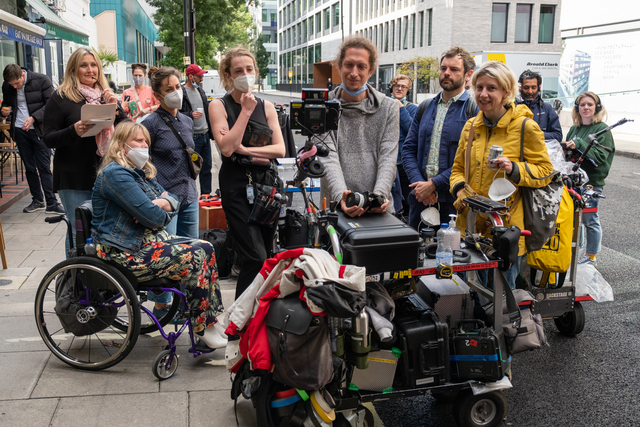 You shadowed Bruce on the set of Then Barbara Met Alan — tell us about that experience. What was the most eye-opening thing for you?

It was so interesting watching not only what is happening in front of a camera, but also what is happening behind it: who does what, how you prep, how you rehearse and then film the scene…it was fascinating! When making my docs, it’s usually me and perhaps one other person, here there were many of us.
I learnt about how a good 1st AD creates ‘pockets of time’, as Bruce would say, and about giving short and clear directions to actors.

“Don’t expect actors to get it right the first time- allow them to ‘move’ into the role with each take and build character take by take” Bruce would tell me. It was mesmerizing watching how he works with them and how much they trust him. “Drama allows for complete subjectivity (unlike docs) of character — every shot and set-up has to have an attitude to reflect that subjectivity.” Bruce would tell me this when we were talking about how to open a scene.

I would watch Bruce working with his brilliant DoP, Susanne Salavati, discussing shots, trying things, and then seeing it all happen. Every night Bruce would send a lovely thank you note for the day’s work and a shot list for the following day to the crew. He knew the crew’s name and would joke with them on set whenever it was possible. I loved this down to earth approach and it was great to see it working.

Did you learn anything from your time on Inspire that you’ll take forward in your career?

When there was a scene that was really complicated, with plenty going on, Bruce would break down the scene into setups and work out the coverage with different cameras. “It’s all about rehearsing and planning. Knowing what is in your background and having a good AD to hold it together. Prep, prep, prep”. So, I learned about the importance of prep and that sometimes you must compromise as you just don’t have the time. Always think of the schedule, was Bruce’s advice. I was sad when the shoot ended. It was a small production and I got to know people over the period of three weeks. I truly enjoyed being part of the team, watching and learning both how to run a set and hot work with actors.

What do you think makes a good mentoring partnership?

What advice would you give to other directors looking to apply for Directors UK Inspire?

It’s important to have an idea in mind of what story you want to tell, and to be prepared to step out of your comfort zone.

What are you working on at the moment?

Developing an idea for the feature film, and working on a documentary for BBC Arabic.