The Directors UK Multi-Camera Directing Skills for TV course is drawing to a close today. We’ll have a full report coming up soon, but for now read what some more of the participating directors had to say about their experiences over these two exciting weeks. 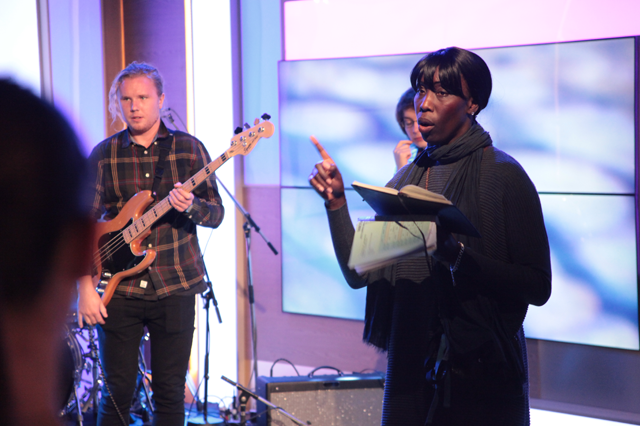 “I have really enjoyed being part of the fantastic first cohort to be taught on Directors UK’s new Multi-Camera Directing Course, it has definitely lived up to all my expectations and more.

The course trainers Jane Elsdon-Dew and Tony Gregory are encouraging and excellent. The list of people who have led the workshops and practicals reads like a who’s who of the best in TV entertainment and live events: Nikki Parsons, Geoff Posner, Steve Smith, Ian Russell, Nigel Saunders, Naomi Neufeld, Angela Jain, Peter Taylor, John Paul Green and BAFTA Special Award-winner Hilary Briegel, amongst others. All the crews, including camera ops from Later... with Jools Holland, have been marvellous, keen to advise, and apparently don’t know how to say no to us when a weird shot request is made of them - which is nice although the results might not have been! The experience and wisdom we’ve received has been outstanding, and to top that off we’ve directed magazine and panel shows from This Morning to Loose Women at The London Studios, and watched a music rehearsal for The Graham Norton Show. At Pinewood, we’ve shot music tracks and will be recording a live event outside broadcast.

Highlights for me? Directing magazine shows was great fun: working out how to transition from one feature to another, working with talent and, when you’re on the floor, watching the ballet from the camera guys is beautiful. Panel games shows were a revelation; once you get into the rhythm you can really have fun with it. I absolutely loved scripting music and getting my head round bar counting again. Busking is great and has its place, however to really capture the nuances in a song and the performance, for me, scripted is the way to go - although if I never hear Jess Glynn’s Don’t Be so Hard on Yourself again it will be too soon…

Our last recording is the 2016 DUK Music Awards, with a live OB from Pinewood! (You mean you didn’t get your invite?) We’ll have a band, a special VIP giving out an award and a nominee coming down the line from ‘Hollywood’. I have a feeling I’ll be excited and scared in equal measure. You’ll have to search #DUKTraining on Twitter to find out how that went.

I’m extremely grateful to Directors UK for identifying this gap and stepping in to train the ‘new generation of multi-camera directors’ -those who want to carry on in the footsteps of these brilliant directors and work with amazing teams in order to surprise and delight our audiences. To be able to learn and make mistakes in a supportive environment has been invaluable.

So now we’re trained, it’s over to you industry: you know where we are!”

Abigail Dankwa directed Big Brother and Celebrity Big Brother last year. Prior to that, she was a stage manager on the opening and closing ceremonies of the 2012 Olympics and Paralympics, and has floor managed for London Live and the UEFA Champions League Finals in Lisbon and Berlin amongst others.

Abigail is also a National Film and Television School alumni, graduating with a MA in Producing and Directing Television Entertainment and is looking forward to embarking on a career directing music, live events and entertainment. 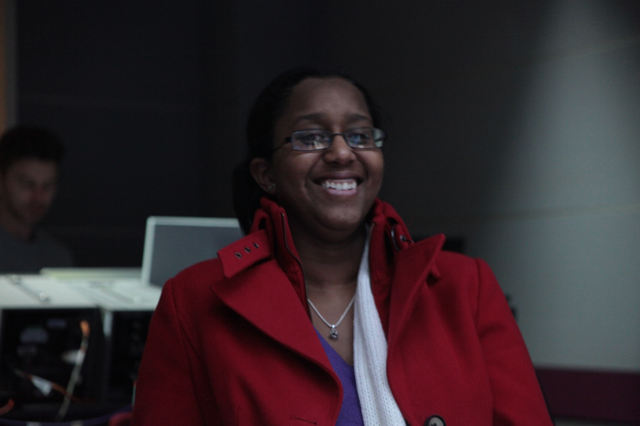 “It’s been an absolutely phenomenal couple of weeks. Pinpointing one thing that’s been great is just so difficult. Even things I’ve struggled with initially were great because they’ve been such good learning experiences. You’re in the studio every day so you will make a mistake and you’ll pick it up, and the next day you’ll do it and you’ll have learnt lessons and you’ll do it differently. Throughout you can see a complete and utter improvement. And it’s been so great learning from industry professionals – people really at the top of their game.

I’ve just come from directing an OB in a big OB truck and I’m just absolutely buzzing, and that’s just been the feeling throughout the whole two weeks. It’s great, it’s been a fantastic experience. Great colleagues, great teachers, fantastic facilities – seriously, the sponsors have been amazing and Directors UK: absolutely top job!”

Dionne’s interest in multi-camera directing was sparked by an intensive summer course she took at New York University whilst on sabbatical from her corporate career. She returned to Europe, quit her job and applied for a place at the National Film and Television School.

We’re also thanking our studio partners, without whom this course would not be possible. Today we’d like to thank Cloudbass, who’ve provided all the outside broadcast trucks, crew and equipment for this week.

Cloudbass was born out of academia and as such has always had an intrinsic interest in education and training. The chance to link up with industry production professionals to help deliver essential and focused training was an opportunity too good to miss. As such, Cloudbass is excited to be providing the facilities to ensure that the training takes place in a realistic environment in order to provide a training experience that truly reflects current practice within the industry.

Being part of this initiative is hopefully the start of a partnership with Directors UK to help deliver training to budding directors and producers alongside engineering training which Cloudbass already undertakes with its staff; training which is being widely recognised as increasingly essential in the TV industry.