While coronavirus continues to cause disruption throughout the screen industries, our members have still found ways to make their mentoring partnerships work with our structured mentoring programme, Directors UK Inspire. 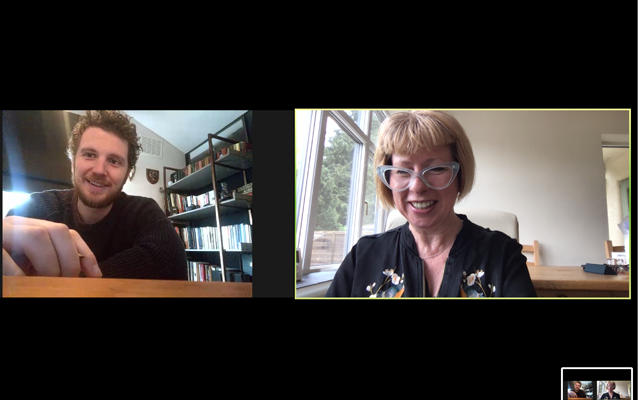 I was looking for a mentor when I’d just heard my short film, The Grab, had been selected to screen at Edinburgh International Film Festival 2019.

A finance company had also come on board my feature film Finding Clive, a romantic comedy with songs, starring Shirley Henderson and Roger Allam, with Melissa Parmenter and Katie O’Mahoney of Revolution Films producing.

I wanted a mentor who was a writer director and had been through similar feature film prep that I was going through.

So, I had a look at the UK filmmakers who were screening feature films at EIFF and William McGregor stood out. He was screening his first feature film Gwen there, and when I looked up his work I was very impressed. As well as writing and directing a strong and distinctive first feature film, he’s also successfully carved out a career directing TV and commercials. I know quite a few people who have worked with William and they all told me he was a lovely person.

I approached William through his agent and he got back swiftly, wanting to know what would be involved. I responded that the year of mentoring would be very much up to us.

We met briefly at EIFF, but our first mentoring meeting was in Cardiff where William took me around the set of His Dark Materials, which felt like a perfect start.

William generously suggested we mentor each other, since it might work better to have a two-way process. So we decided to do reciprocal mentoring for our year which feels like a more fluid, open-minded approach than the usual mentor/mentee dynamic.

What has it been like mentoring online? What were you able to get help with?

During the lock down we have to meet online, but actually I mainly live in Frome and William lives in London so mentoring online is much easier for me.

William has helped me on so many fronts. Spending time with him has greatly shifted my perspective of the industry. The finance for Finding Clive keeps being delayed and William has been so reassuring about this. He also had a period of time before all the finance came together for his feature film Gwen. He keeps reminding me that in independent filmmaking delays in financing are perfectly normal.

While I’ve been working on all the shot plans and storyboards for Finding Clive, I’ve also been working on pre-edits for music videos of the eight songs that Shirley Henderson will sing.

Annemarie Lean-Vercoe, the DoP, and I have begun pre-shooting some shots for these music sequences using a B-camera (Lumix S1H) with indie anamorphic lenses. Just before the coronavirus lock down, we tested the A camera and B camera to make sure they work well together and we were impressed with the results.

William has been so supportive, looking through all these prep documents, footage and music videos. A nod of approval, or a positive comment from him has meant a great deal and helped me forge ahead.

Richard Ketteridge, an outstanding editor, who has worked on so many wonderful films including Paddington 2, Rocketman and Blinded by the Light, is also now advising me on the Finding Clive prep.

In my downtime I’ve been working on a TV thriller series, The Client List, that I adapted from my feature film script. I sent in a two-page pitch of this to a top TV exec who immediately responded, excited about the idea and asked me to send her the pilot script. I felt anxious about shifting my focus away from Finding Clive, but William was so encouraging that I took a few weeks out and worked on the pilot script.

Lately William has been sorting out his development slate, which has encouraged me to do the same with mine. I’ve reworked Baby, a supernatural black comedy feature film screenplay, which is now being read and I’m about to rework the ideas of Autoroute D’Amour, my romantic thriller feature film, into a television series.

How does mentoring online work practically – do you set regular dates? What apps/programmes did you use?

We try to have a meeting every month but if we’re not able to, I send William an email updating him on my progress.

I set myself deadlines for each meeting, so the email to William is part of that deadline.

The app we use is Zoom. At present it seems like the best platform to use — it’s simple and it’s free. 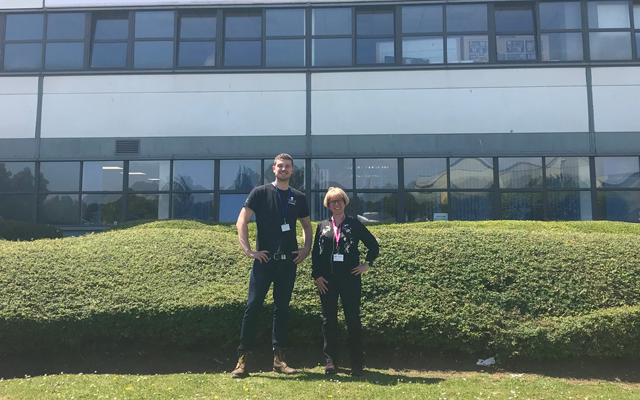 What advice would you give to people mentoring online to make sure they get the most out of it?

My advice to other people mentoring would be that maybe it’s worth considering doing reciprocal mentoring like William and I are doing.

Filmmaking is tough for everyone, at whatever stage you’re at in your career, and especially during the coronavirus pandemic. Reciprocal mentoring has given William and I both time and space to express ourselves.

Would you recommend Directors UK Inspire – and an online mentoring partnership – to other members?

Directors UK Inspire is an outstanding scheme that I highly recommend. Directors UK have provided us with an excellent template. Since we are able to choose our own mentors on Inspire, it feels quite empowering. It’s up to us to select a director who will be the very best mentor for us.

My main focus is to continue prepping Finding Clive and pre-shooting until the main shoot. I’m also going to continue working on my tv series The Client List and my feature films, Baby and Canine, and the romantic thriller TV series based on Autoroute D’Amour. Taking heed of William’s advice, I’ll also be putting myself up for television directing work!