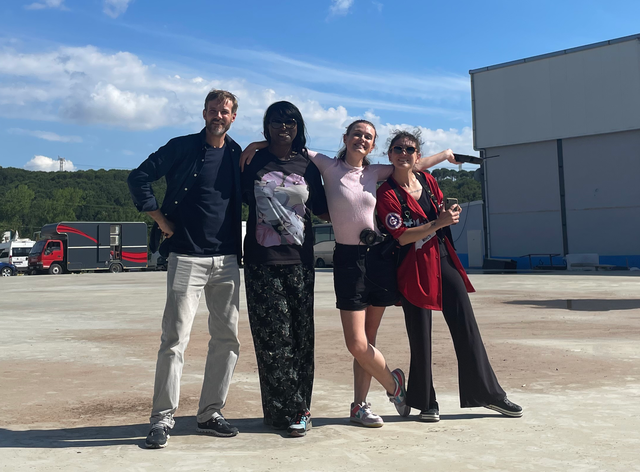 Rita told Directors UK about her experiences forging a successful mentoring partnership — find out more below.

When I started on Directors UK Inspire, I had already directed a feature film, several short films and directed and produced two theatre productions, but I had a specific goal of adding directing High End Television (HETV) to my range. With this in mind, I contacted Lynsey Miller — a fellow member of the Cinesisters director collective — and asked if she would be my TV mentor. Lynsey agreed, and encouraged me to apply to the competitive Directors UK Inspire programme.

Once I’d got my place on the programme we got straight to work, meeting regularly on Zoom as we were still embroiled in the pandemic, and discussed my goals for the year. We created an action plan to deliver on those ambitions, with the initial one being to direct a large second unit for a company I admired, and a director whose work I liked.

I’d chosen my mentor well. Lynsey had already given opportunities to other Cinesisters who are now thriving in HETV, and thanks to her looking out for me my first HETV job came through director Ella Jones and SISTER. They hired me to direct the driving unit on Ella’s closing episodes of the acclaimed horror comedy, The Baby, created by Sîan Robins-Grace and Lucy Gaymer. It was a great job. At a large farm in Hertfordshire, I directed two camera teams as well as a stunt team to get the shots we needed. It was also during this time that I began my voluntary role as Chair of BAFTA’s British Short Film Award Jury, and as it would turn out, Lynsey and I had our very first in-person meeting in the back of a taxi on the way to the 75th BAFTA Film Awards ceremony. I recently wrapped up my time on the Inspire programme by shadowing Lynsey in Istanbul on the upcoming crime drama from Miramax, Ay Yapim and Paramount +: The Turkish Detective — an adaptation of Barbara Nadel’s Award-winning novels, starring Emmy-winning actor Haluk Biligner, Ethan Kai, Yasemin Kay and featuring Victoria Ekanoye. The Block 2 team were in the last week of their shoot when I arrived, and I was quickly welcomed in. Lynsey also introduced me to the showrunner and writer of the series as well as the producers. It was inspiring being on another director's set, watching the actors and team, led by Lynsey, working in the stunning sets, and she listened openly to any suggestions I made or questions I had.

Inspire is a fantastic programme, and to anyone thinking of applying, I would say it’s important to find mentors who are great listeners — and be sure to give something back to them so it’s an enjoyable experience for you both. A huge thanks to everyone involved in Inspire, especially to my Cinesister Lynsey Miller and Sean Thomas at Directors UK.

Directors UK Inspire will reopen for applications in the autumn.