Inspire: Shadowing on the set of His Dark Materials

Below, Nour tells us all about the experience, including working with incredible VFX, a fantastic cast, and much more.

Over the last 15 years I’ve been building my directorial experience and slate in genre material that resonates on a both a cerebral and emotional level. Other than my many shorts, I’ve directed a couple of episodes of the BBC3 short series The Break and a short TV pilot for techno-thriller The Moderators. I’ll be catching my TV break this year on an exciting new sci-fi show that’ll be announced once the Covid19 situation hopefully improves! 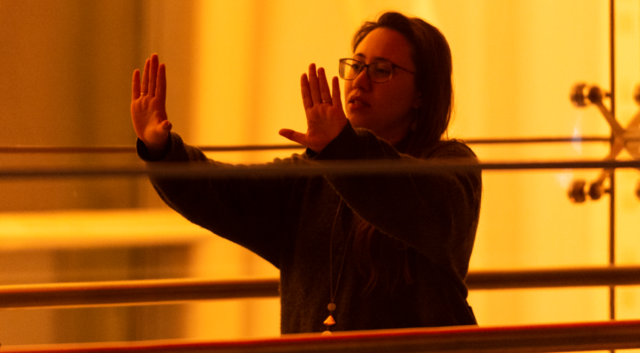 My passion lies in the thought-provoking and entertaining world of science fiction, the supernatural and thrillers, which are typically aligned with bigger budgets. Look out for my shorts - thriller Baby Mine and sci-fi thriller Lab Rat – launching on Omeleto and sci-fi channel Dust in the coming months.

BABY MINE TRAILER from Nour Wazzi on Vimeo.

I’ve also been working as a 1st Assistant Director for several years which has allowed me to work with a number of talented directors and run a diverse range of film, TV and commercial sets but I still hadn’t operated at the kind of budget level I intend to be helming in my career. I craved the insight of working on much higher-end projects that had huge visual effect demands and set builds.

It was fortuitous when I got the opportunity to be supported by Directors UK’s Inspire scheme and ended up shadowing director Jamie Childs’ final episodes on the extraordinarily imaginative BBC/HBO/Bad Wolf show His Dark Materials, based on Sir Phillip Pullman’s books. 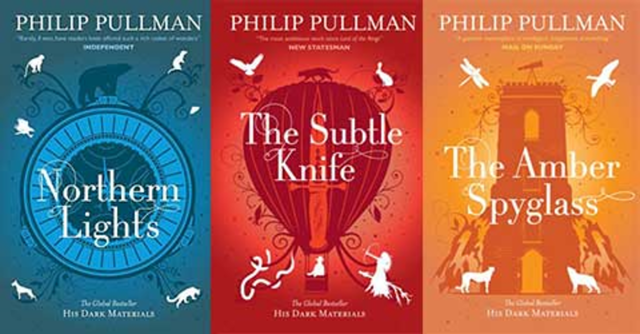 At first the idea of shadowing wasn’t hugely enticing as I’m used to running sets, so was worried I’d quickly get bored just watching and being useless. To my surprise shadowing Jamie was such fun as we hung out on the beautifully designed sets, talked through his choices and even felt remotely helpful as he took on my feedback - which made the experience all the more enjoyable. 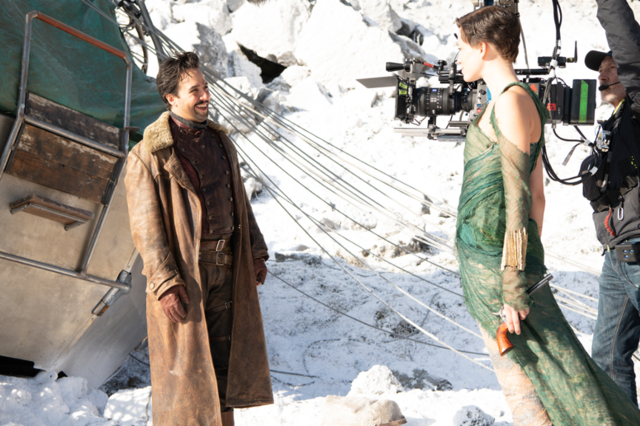 The whole team were lovely and welcoming - it was a privilege to have been allowed a glimpse into this world. It was such a joy to meet and see the work process of its incredibly generous and talented cast who I’d work with in a heartbeat including Dafne Keen, James McAvoy, Ruth Wilson, Gary Lewis, Ruta Gedmintas and Lin-Manuel Miranda. 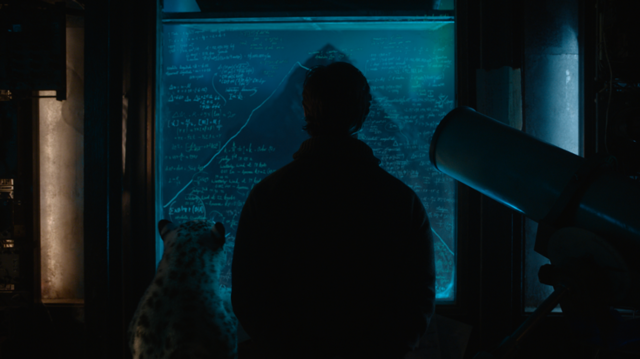 I first met Jamie five years ago as an accomplished commercials and promos director before he’d broken into long-form TV. His fast trajectory to getting an epic show like this was pretty damn inspiring. Like most who breakthrough someone saw something in him and championed him to get his first broadcast credit. When I started shadowing Jaime it wasn’t hard to see why he’d skyrocketed so quickly.

With his seemingly laissez-faire attitude, he approaches directing like “brush strokes”. While he has a clear idea of what he wants, he keeps his cards close and has the remarkable skill of making other people think they’ve come up with an idea when he has in fact tactfully steered them there.

Like me, he always looks at where he can pull out the most tension and emotion from a scene while keeping action dynamic. He strips a scene back to its basics - thinking of the simplest way to cover his beats and finding ways to organically develop his shots into singles rather than cutting to them to reveal something new if he can help it. 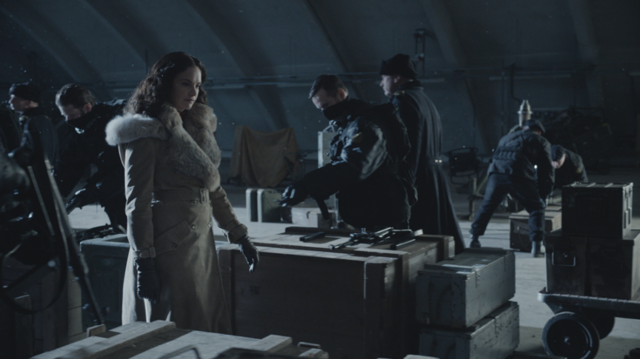 For a director who had every toy and tool at his disposal and whose work is very striking visually, he wasn’t easily seduced by a sexy shot and it was always about serving the story. I found it interesting that he opted to save his wides till the very end - in his view starting with wides is great for lighting but wasn’t ideal for performance and staging. I’ve been coming round to this especially as you’ll likely only use it for a few seconds in the edit so why waste a fresh performance? This is of course all the more relevant when working with younger actors.

The most valuable stuff for me was Jaime’s experience of working with pre-vis/ massive 3D sets and building around staging ideas during prep – while the final scripts are still being written. There are a million variations of how to do something at this scale so you undoubtedly have to be attached to something physical that’s right for the characters, POV and overall story. 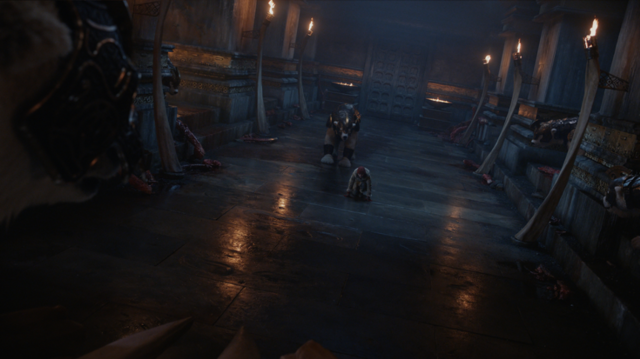 I’m immensely grateful to the VFX team who were also very giving with their time, particularly Creative Director Television Russell Dodgson and VFX PM Rob Duncan from Framestore who gave me in depth insight into their process both in prep and production, and how they used visual effects to facilitate the storytelling across the show.

The level and amount of VFX work is unparalleled, especially in British TV, so working closely with the art department and directors from an early stage to do concept work and pre-vis (seen more in beats than in shots) was of course crucial to work out how they would translate things visually and not be self-limiting.

I found it all very illuminating including the use of puppetry for visual and interactional cues, as well as the reference passes required for fur, colour and light in the creation of the photoreal Daemons - each imbued with their own nuanced personality that reflected what their human was feeling. 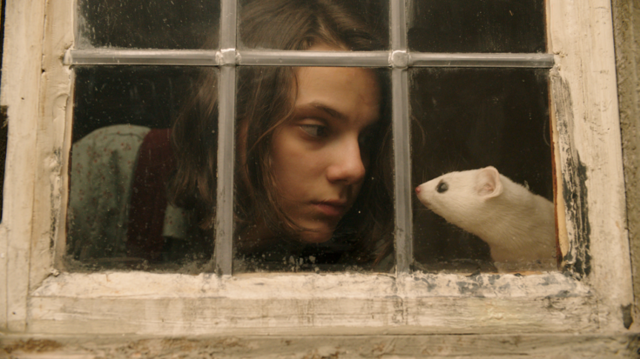 One of the coolest things I got insanely excited about was how they created a virtual reality of one of their town sets using a gaming engine. It showed the parts of the set that would be built by the art department and which would be created in visual effects, and allowed the director to navigate through the town to plan their shots and the movement of the characters through the set. 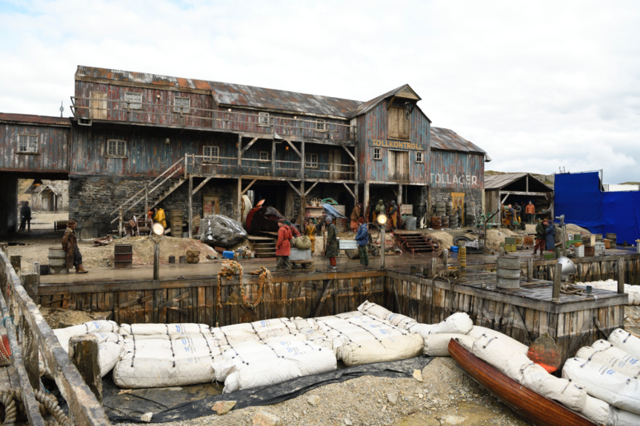 In the same vein the process for a bear fight was incredible - after the fight was choreographed Jaime crafted his shots in pre-vis and Framestore were able to live comp during shooting by using small cameras rigged across the set that basically re-mapped out the action. 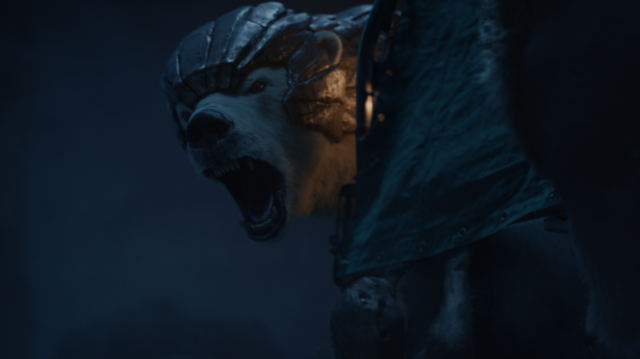 When you’re working at this level with high VFX demands, I learnt that sometimes a lack of specificity is better and you need to look at the overall scene or sequence rather than the minutia. Sometimes you just have to let go of control (hard for most directors!), it doesn't have to be your way it just has to be good and there are so many ways things can be good. You have to do the best as you can with the resources you have available to you, and sometimes you just have to go with the less interesting higher quality shot rather than risking a shoddy shot that takes the audience out of the story.

Being able to attend a number of HOD meetings, I found that no matter what budget you work with you’re always going to feel there isn't enough money as your ambitions just get bigger so it's always going to be a sliding scale between VFX, production design and directorial. In the end it comes down to having a team you trust that believes in you and material you resonate with - everything else is a bonus.

Following an empowering trip to LA last year, where I pitched several of my feature scripts and TV shows to my top companies and studios, it became clear how in demand female and diverse genre directors finally are at a higher budget level. The whole shadowing experience has given me a taste of what it would be like working on higher-end projects and affirmed how ready I am. With one on the horizon, I feel lucky to be championed by producers who believe in me – often seems one person is all it takes. Though it is certainly a bittersweet win in these unsettling times.

There’s so much uncertainty in the air of the global ripple effect, it’s hard to see the light at the end of the tunnel. At least we are fortunate to live at a time when technology enables us to be remote and virtual. We recently started online writer rooms for the show and even had an online read-through with actors for my feature Chimera. It’s a very strange time!

I’m just taking it one day at a time and trying to stay positive that we will see the other side of this madness sooner than later. We will get through this. I’d like to think that when we do, it will act like a reset button allowing for a fresh perspective on our lives...